At long last I have reached the end of my Prussian infantry painting project.  During the last couple of months I have painted/repainted 18 Prussian infantry units, along with two batteries of guns. In all this has worked out at around 230 figures.  It is quite satisfying to know that I have completed an army - well more or less. I still have a few cavalry figures to do and there are around 30 odd Prussian infantry that could be formed into units.

The final two units consists of a couple of Ros 25mm Prussian Jaegers.  There are no Jaeger musicians in the Ros range, so I converted a couple of standard bearers. I have also used some Warrior Prussian Horse Gunners as officers, as I did not think that the standard pointing Infantry officer figure would look right, given the Jaeger pose.

Here they are, ready to take up their position in the line: 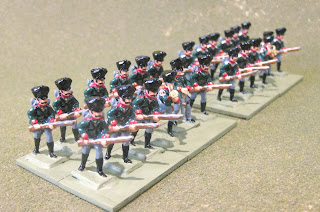 Methinks a Spring review is in order!
Posted by Bob The Old Painter at 04:46