I thought I would have a go at the other half of the ESCI Russian Crimean War set, which includes a couple of guns and crews. I have never been inspired to paint these before, however, I decided to do a head swap for the gunners and extend the coat of the officer. The results are OK and this set provides a useful and cheap source of Russian artillery: 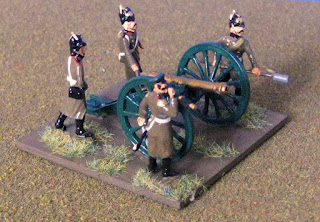 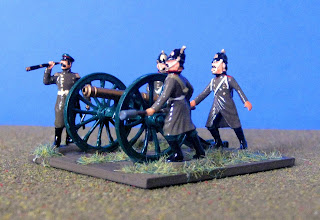 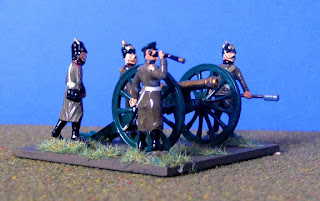 Three new castings from Old John in the form of British officers, based upon Minifigs S Range originals. The first figure from the left wears the Albert shako and a non regulation sheepskin coat. He depicts a member of the Rifle Brigade. The second officer, from a line infsntry Regiment, wears a sleeveless sheepskin jacket over his red tunic and has the popular undress cap on his head.  The third figure, also line infantry, is more or less in regulation dress, with the pork pie hat and blanket roll over his shoulder.

I have had a heap of unpainted ESCI plastic Russian infantry, that are from the Crimean War artillery set, sitting in a box for many years and I have never had the urge to paint them. The other day I bought a load more; enough to form four Battalions in the same pose. During a marathon painting sssion over the weekend I managed to paint and base nearly 100 figures. I converted some drummers and standard bearers and gave the officer figures greatcoats, rather than the incorrect frock coat.

Here they advancing in column: 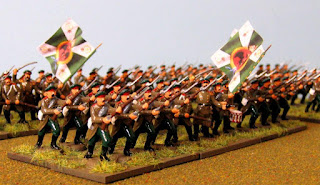 Two new offerings from Old John, in the form of a Sardinian Bersaglieri and a line infantry soldier. Both are conversions which use the venerable Minifigs S Range American Civil War Marine as the original figure: 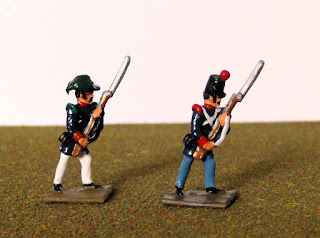 I spotted these figures on Ebay. They are Russian Cossack infantry by Strelets and they were nicely painted. All up there are around 50 figures, so I varnished them, touched them up and based them to form two Battalions of skirmishers.

They are great figures, with some lively (and some odd) poses that remind me of the skirmishers that were portrayed in the film Charge of the Light Brigade, as the British began their assault over the Alma.