Having taken on board the comments regarding weapon performance, within the limitations of the rather simplified mechanisms in the Grant system, I have adjusted the table to hopefully give a better reflection of the capability of tanks.  Here is the latest chart: 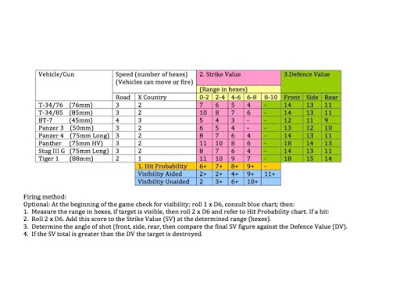 Having taken on board the suggestions received, I have had another go at producing a set of rules for tank battles within a single table, based upon Charles Grant's simple rules from his book "Battle". I think these may well work. This is what they look like now: 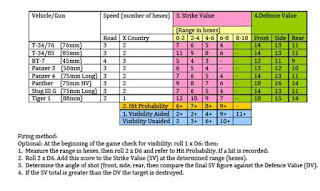 I am going to add some additional vehicles, but I think I am now ready to play test these.

As mentioned before I have always been a great fan of Charles Grant's rules for WW2 contained in his book "Battle! Practical Wargaming".  On leafing through the book again, I was struck by the simplicity of his rules for tank warfare, which he explains in the chapter under Armoured Action.  Essentially everything you need to fight a battle is contained in two simple charts, although Grant does employ a rather complicated measuring stick for calculating the strike angle of a shot. Here are the charts extracted from the book: 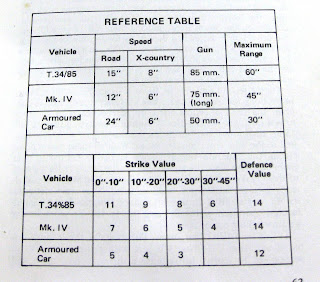 I am keen to try these rules out, but wondered if they could be modified to work on a hex grid, expanded to include more vehicles and simplified further. After some playing around, I came up with this: 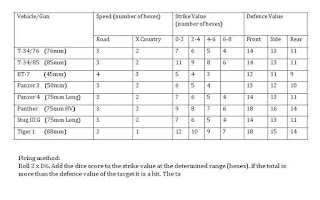 I based the additional data on the calculations used by Grant in the book to be played on a five inch grid. I would see one vehicle being allowed in a hex. I have added factors for side and rear shots, removing the need for the strke angle tool. Now the ranges and moves have been calculated, any scale model and hex size can be used - I think!  Thus, 1/300 scale tanks on a one inch grid could be used.

I plan to give these rules a test run in the coming days - just as soon as I dust off my old Roco Minitanks.

With the Bridge now ready to blow, the priority for the British commander is to recover A and B Companies to the home bank and destroy the bridge before the enemy tanks break through.

At last luck changes for the British, with a high troop activation dice throw, two of the Chieftains depoly on to the high ground, following more good luck as the Artillery Forward Observer requests a fire mission to take out the annoying Swatter ATGW launcher. His request for fire is granted by being allocated a regiment of 155mm guns. Five rounds fire for effect sees 90 shells slam into the hill, obliterating the BRDM Swatter launcher: 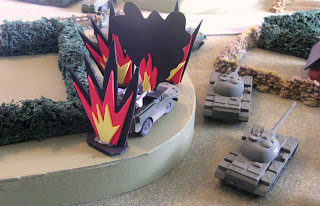 The rest of the British movement sees A and B Companies begin their withdrawal.

On the other hand, the Soviets have a very poor activation; limited to just one pot shot at a Chieftain, that misses.

This pause allows the British infantry to break clean and pull back, and the Chieftains to take up their new fire positions on the higher ground: 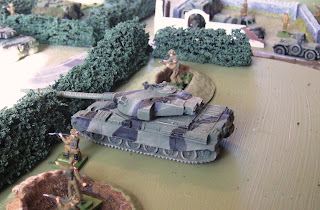 The Soviets now have better luck, and realising that the bridge will be blown soon, their commander decides to push his armour forward en masse. Three companies  of tanks supported by two infantry companies surge forward: 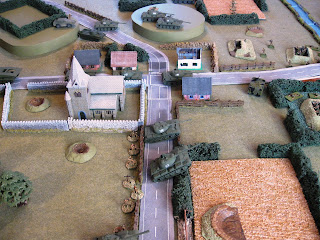 The soviet tanks now come into range of the Chieftain 120mm guns and two T-55s are soon on fire: 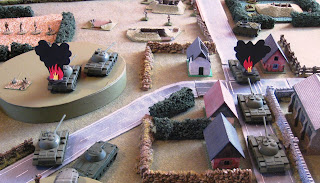 Meanwhile most of B Company and the A Company APC make it to the bridge and cross over: 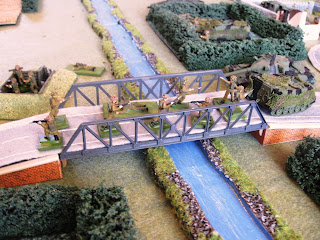 The soviet tanks rumble forwards and A Company comes under serious pressure and is unable to move, taking fire from infantry and tanks: 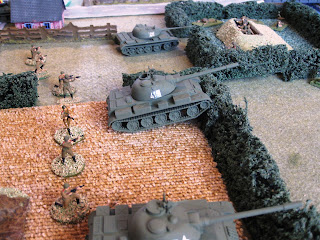 On the other flank Soviet tanks push through the abandoned B Company forward positions: 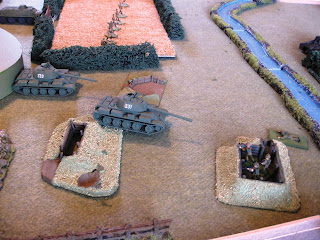 But are halted by accurate fire from the Chieftains: 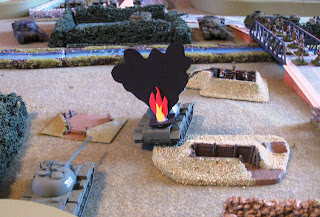 Another T-55 is hit as it attempts to break through A Company: 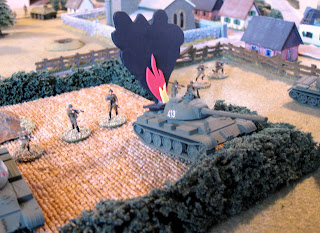 The remnants of A Company capitulate as they are overun by tanks. In the centre, two tanks of the Soviet centre company rush for the bridge, as those men of B Company who managed to escape cross over to the home bank: 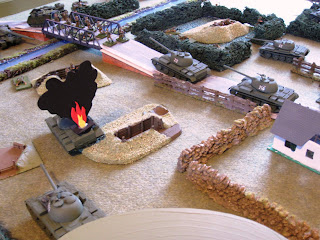 The British Commander decides that A Company is lost, the survivors of B Company on the far bank will have to swim for it as he gives the order to the engineers to blow the Bridge: 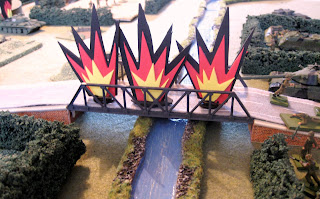 The Bridge collapses into the river and the enemy advance is halted. The Chieftains kill two more T-55s before pulling back from their firing positions.

The battle is a win for the British, although they lose over a third of their infantry and tanks.  However; the Soviet advance has been halted for the time being.

The last headlong assault was very costly for the soviet commander. He has lost over half of his tanks and failed to take his main objective, the bridge.