Contemporary accounts of the allied march after the Battle of the Alma towards Sevastopol speak of the ever present Cossack scouts, sitting atop the ridge lines constantly watching the allied movements. Always out of rifle range, they would melt away when the allied cavalry tried to confront them. My latest batch of troops is a unit of Cossacks from Tumbling Dice. These are lovely figures and a joy to paint. Here a scout maintains his vigil, observing the long columns in the valley below: 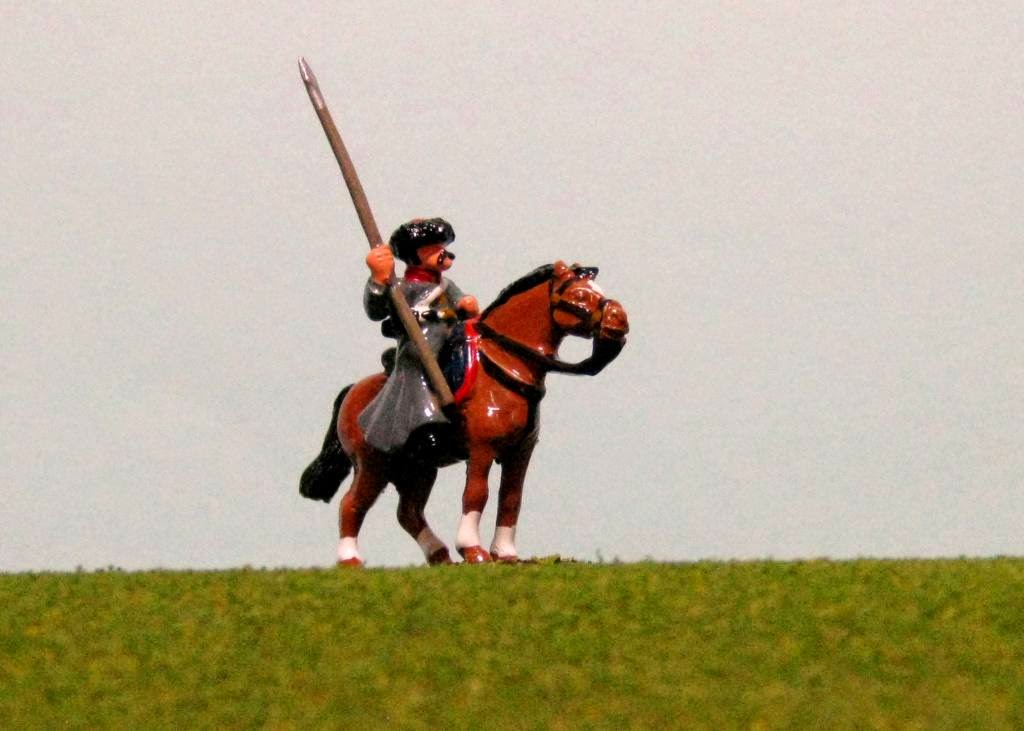 Marauding Cossacks would also pick off stragglers, or unprotected supply wagons, making lightning attacks before disappearing back into the hills:

The Battle of Balaclava

If I am to follow the sequence of actions fought during the Crimean War, following the refight of the Battle of the Alma, the next engagement will be the actions that make up the Battle of Balaclava. This battle presents a bit of a dilemma if the historical flow is strictly adhered to. It could be fought a series of separate smaller battles. First you could have the Russian assault onto the Causeway Heights to overwhelm the Turkish held redoubts. This would be followed by the Russian cavalry attack culminating with the "Thin Red Line" and the Charge of the Heavy Brigade and the final action would be the Charge of the Light Brigade. Whilst glorious spectacles in their own right there is not much appeal in wargames terms, especially the Light Brigade action. Furthermore, if the battles do not result in an historical outcome the next battle will make little sense.

After a lot of deliberation I have decided to begin my action during the morning of 25 October 1854, that sees the Russians mounting a deliberate attack onto the Causeway heights, which are thinly held by a mix of Turkish infantry and artillery in 5 unfinished redoubts. The Allied command has woken up and Raglan has ordered the 4th Division to move towards Balaclava.  The allied forces, mostly cavalry, have hastily deployed into the field. A highly simplified map depicts what the battlefield might look like: 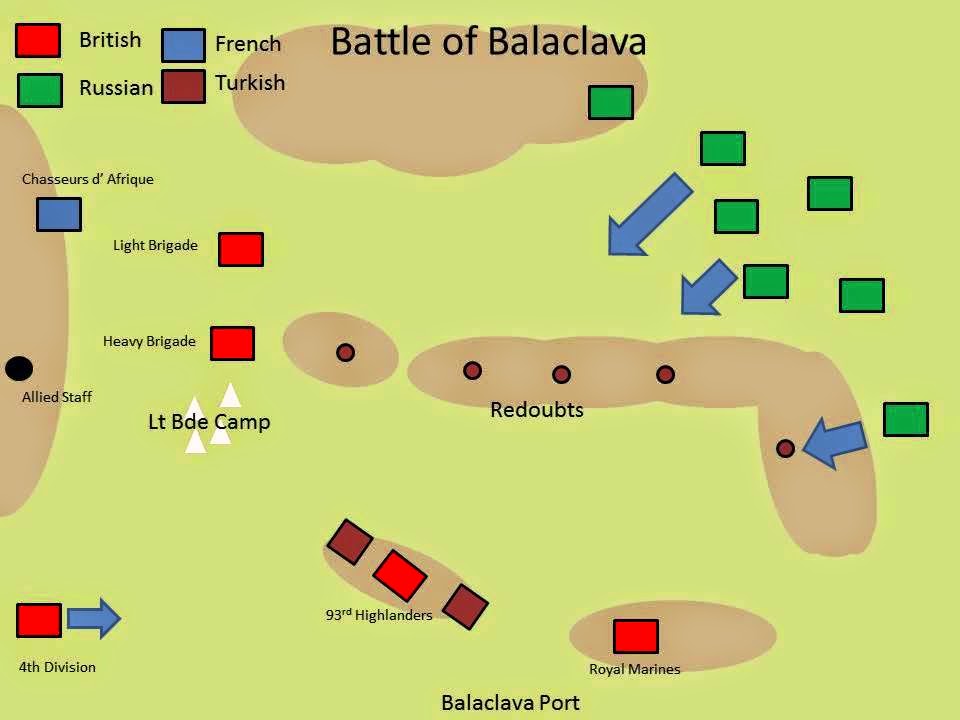 The battle could then be fought from this point, with all sorts of chance factors to reflect some of the historical mistakes. The 4th Division arrival could be unpredictable as could reaction to orders issued by the Allied staff up on the high ground. Similar effects could be used to reflect the cautious nature of the Russian Army. Victory, I think, would go to the side in clear possession of the redoubts up on the Causeway Heights. This is based on the idea that capturing the Heights formed part of the Russian objective of disrupting the supply line from Balaclava port to the Allied Army besieging Sevastopol, off to the west.

I think it will make a really interesting game. I still have a few more units to paint as the action is very cavalry heavy, biased towards the Russians. I also need to rustle up some Chasseurs d Afrique and some Royal Marines!!

I shall continue to work on this idea.
Posted by Bob The Old Painter at 07:05 3 comments:

Email ThisBlogThis!Share to TwitterShare to FacebookShare to Pinterest
Labels: Battle of Balaclava

Another Russian gun team takes to the field. these particular figures are by Tumbling Dice. They are very nicely animated, cleanly cast and are lovely to paint. The only slight drawback is that there is some assembly involved and I hope my super glue will keep all the bits in place: 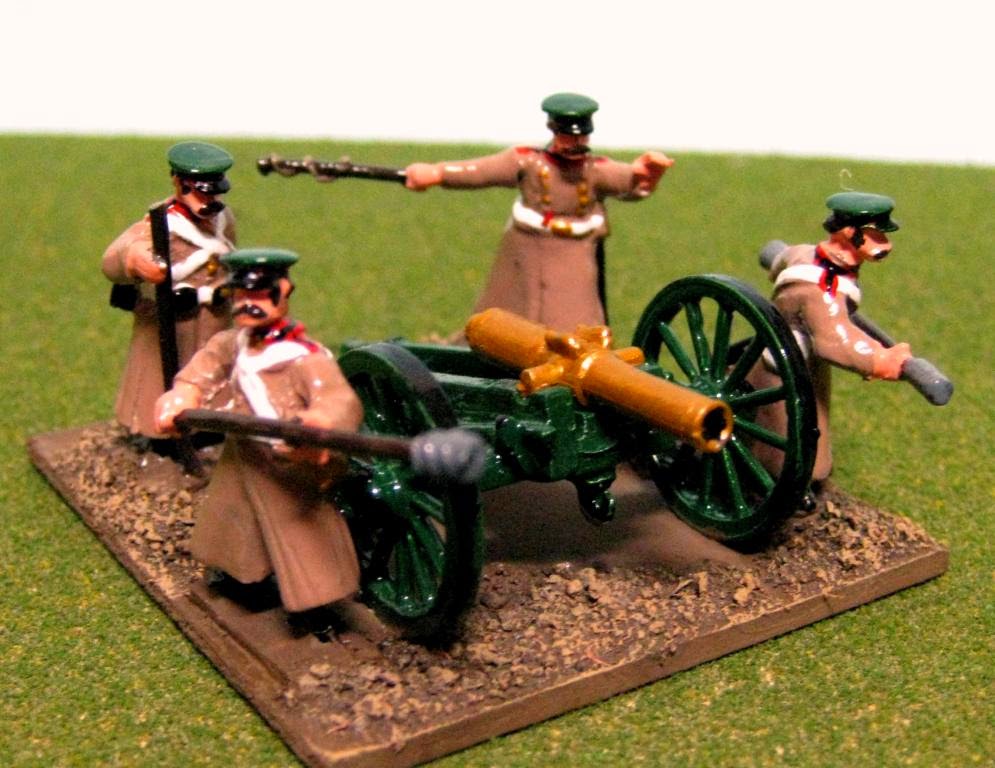 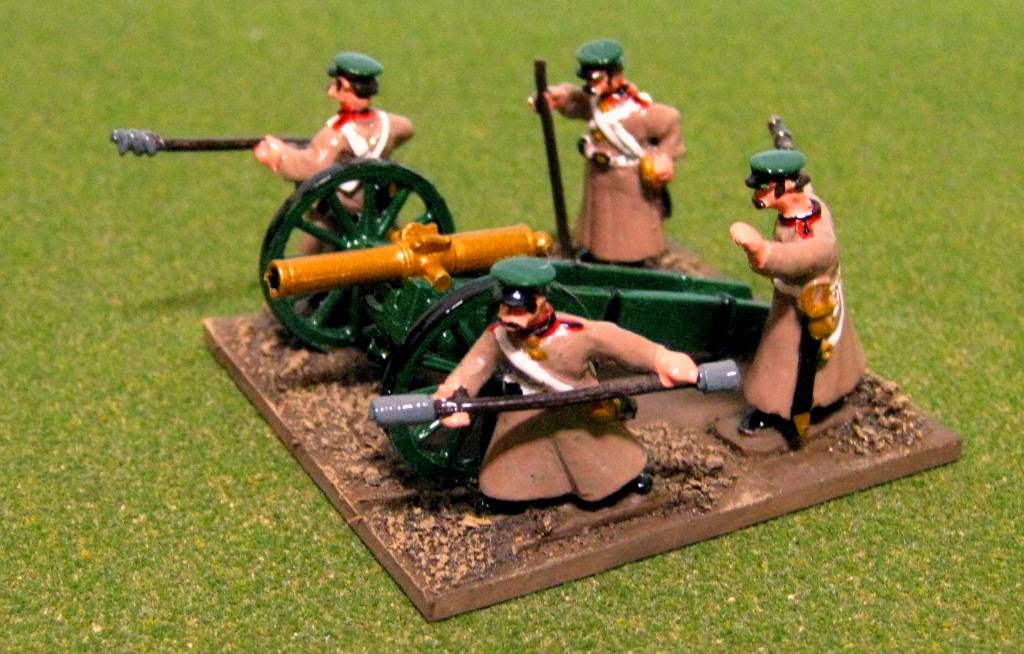 I am working on some more Cossacks, also from Tumbling Dice and I may make some progress over the weekend.

A second unit of Douglas Miniatures Cossacks takes to the field, I painted these in grey greatcoats, as opposed to the more normal blue, based upon references found on line. I have two more Cossack regiments on the go, one from Tumbling Dice and the second from Irregular Miniatures. When completed, along with another lancer unit, I will have eight Russian regiments, one Turkish and seven British Regiments. Being able to fight an action at Balaclava is becoming a reality.

Here are the latest Russians to join the ranks: 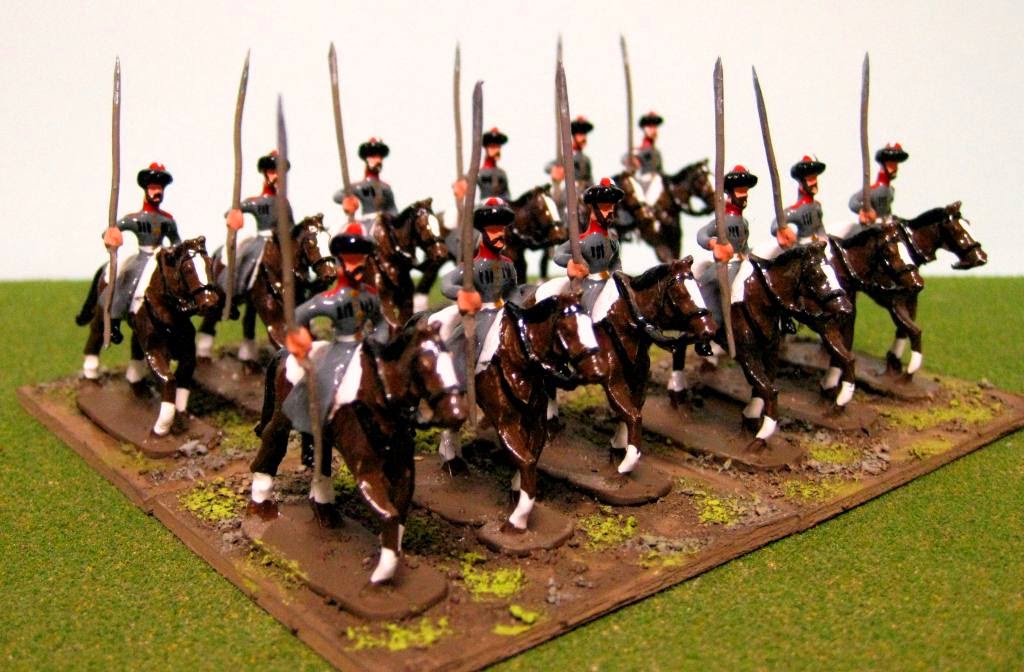 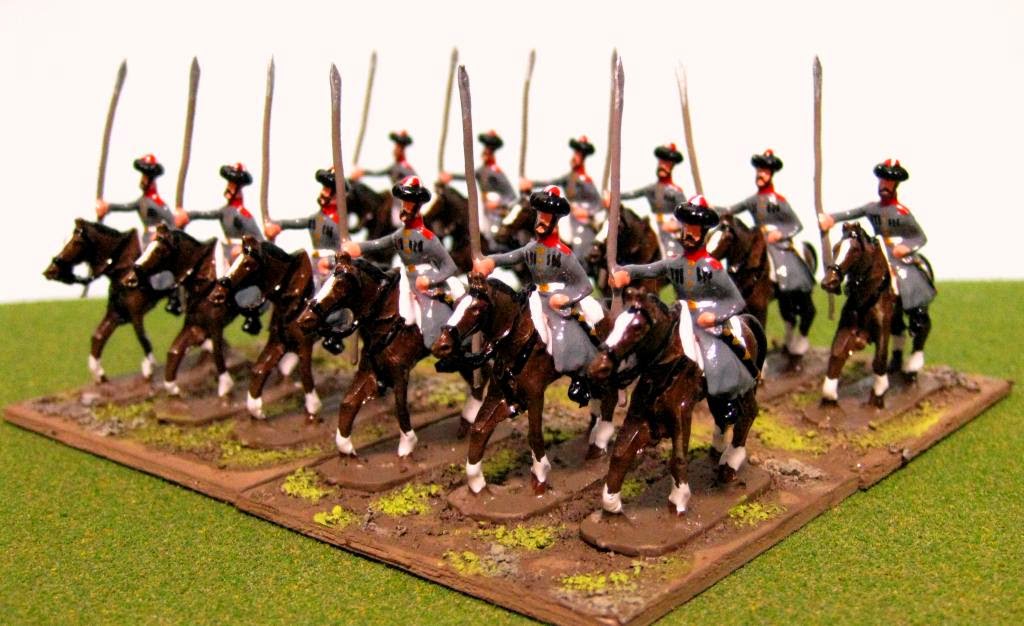