Continuing the process of building up the skirmish forces across the armies, this offering features Sardinian light infantry (Bersaglieri) in skirmish order. The figures are by Strelets and are painted pretty much straight from the box.  These troops will come in very handy when I come to refight the battle of Tchernaya, which will see French, Sardinian and Turkish troops attempt to hold off a massive Russian attack - but that battle is some way off at the moment.


Finding reliable information on the dress of the Sardinian artillery during the Crimean War has proved to be a challenge; however, a uniform in the French style with black facings, piped in yellow is fairly consistently recorded, as is the dark blue tunic, breeches and shako (trimmed in yellow). The horse artillery had a drooping black plume, again similar to the French line artillery, although the length and style varies between sources. Leather straps are reportedly yellow or buff in colour.

I have based my version of these colourful troops on the Minifigs S Range French artillery and they will provide valuable support to my growing Sardinian contingent. 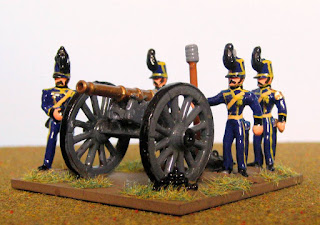 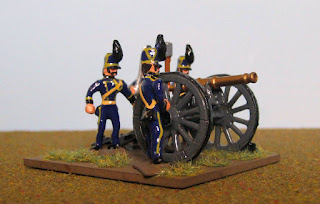 Of all the Crimean figures produced by Strelets, I think this set is my favourite. It has loads of good poses, crisp detail and has great figures, especially when compared to the British line infantry set from the same company. Fortunately the uniforms of the Rifle Brigade and line troops were very similar and so the set becomes quite versatile. Sadly no officer or NCO figures feature in the set, which is a shame.

On this occasion I have painted them straight out of the box as a unit from the Rifle brigade in light order equipment as skirmishers. The officer comes from the Hat British Light Infantry set, with a new head: 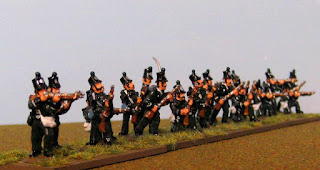 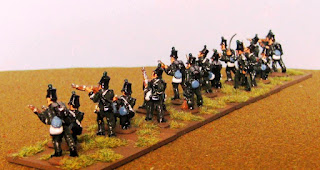 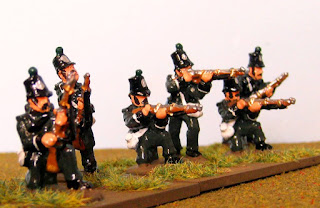 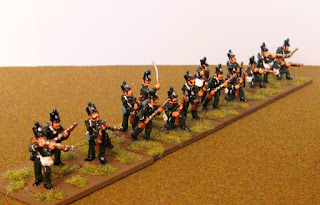