Over Christmas my wife and I headed for the sun, which is the reason that I have not posted for a bit; however, as part of my reading list I took two of my favourite books - "Battle" by Charles Grant and "Operation Warboard" by Gavin and Bernard Lyall. Now, whilst I have had these books for decades and thumbed through on countless occasions, I had never actually read them from cover to cover. 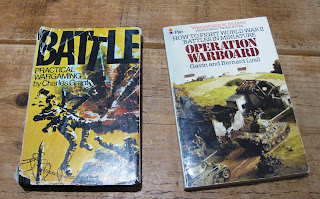 I was taken by the introductory scenario in "Battle", the Action at Twin Farms and was inspired to have a go. I did not use the rules in the book, chosing to use my own, for two reasons. First I am not keen on the machine gun and artillery grid system and second, I wanted to introduce the idea of suppression, suppressing fire and the effect this has on command.  This allows some fire and manouvre.

Also, I changed the forces from Russians versus German to British versus German. I  gave the British a carrier platoon as a substitute for the third half track. The Germans have a platoon plus, while the British have three platoons, including a light mortar. Here is the scenario from the book: 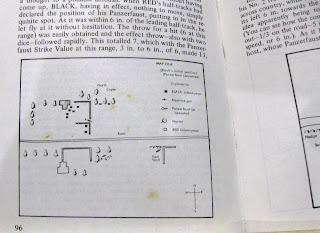 This is how the battlefield looks when laid out on my 6 x 4 table: 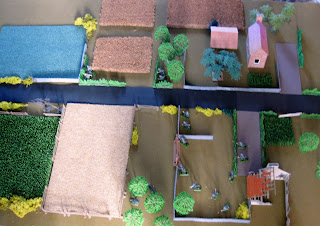 The table is 180 degrees different to the map. North is to the left and I have called the top farm' East Farm and the bottom farm, West Farm.  The German dispositions are also shown; on the far top left is the anti tank team supported by a machine gun in the copse to their rear. Around West Farm are the remaining Germans, with a second machine gun by the gate covering the road. British forces are off the table.

I decided to start the scenario as Grant did, with the first (1 Platoon) half track coming into range of the German anti-tank team: 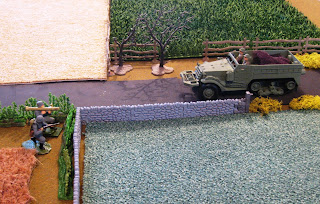 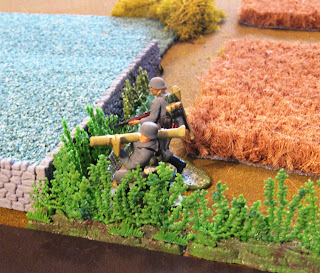 The action kicks off with the Germans firing the panzerschreck, which misses and a burst of machine gun fire, which hits one of the British infantry in the half track. They throw for suppression but they are OK.

The British cry, "ambush left" and debus from the half track fearing another anti tank round and the vehicle machine gun pours fire into the anti tank team eliminating the loader. 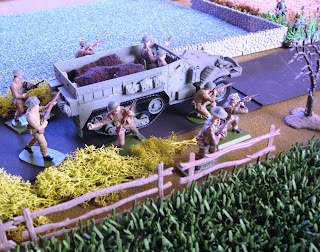 A second half track comes onto the board. 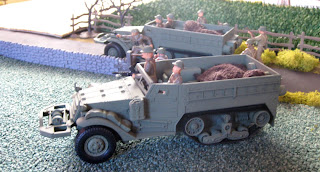 In round two the remaining German anti-tank gunner decides to make a run for it and is cut down by rifle fire and the half track pours fire into the corner of the copse taking out the machine gun and loader, but not before they cut down two further members of 1 platoon. The German ambush is eliminated. The 2 platoon half track continues to move around the east flank and the first vehicle of the carrier platoon arrives: 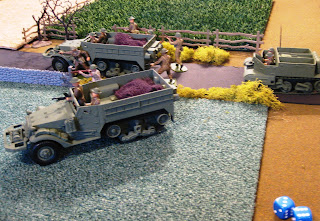 On move three the German commander is concerned about his exposed east flank and orders additional infantry to reinforce East Farm. At the same time the second German machine gun, forward of West Farm, opens up on the now debussed 1 Platoon, causing a further casualty and suppressing 1 Platoon.

The British dismount 2 Platoon, while the german machine gun continues to take its toll, eliminating another rifleman in 1 Platoon.

British command falters and for a while they are halted by the heavy fire coming from West Farm. Meanwhile the Germans pull back some forward infantry on their left flank and continue to reinforce East Farm as infantry dash across the road: 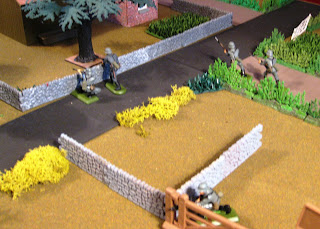 On move 5 the german machine cuts down another member of 1 platoon, which remains trapped on the edge of the field next to their vehicle. The British commander, again with a weak command throw, decides to try to out flank the Germans to the east by deploying the carrier platoon. 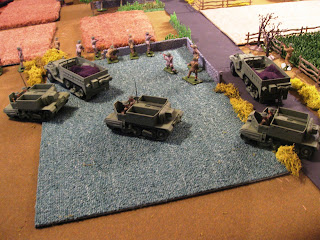 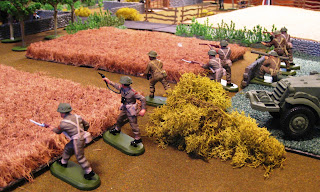 In move six, the german reinforcment from West Farm arrives in East Farm and the machine gun causes another two casualties in 1 Platoon, which breaks and pulls back out of range. 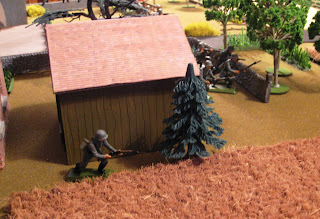 On move seven, the German commander decides to redeploy some of his forces in West farm, including the machine gun, so that they can engage 2 Platoon. Meanwhile 2 Platoon accounts for one German in East Farm.

This creates a slight lull for the British, who despite the loss of 1 Platoon reorganise and push forward, with the carriers sweeping around the flank and a 2" morter is deployed, which engages the german machine gun, but the rounds fall short: 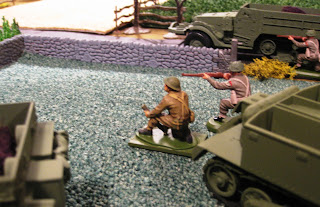 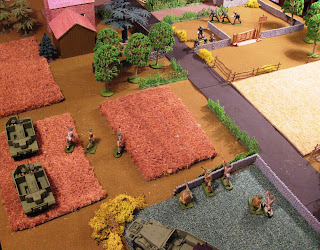 On move 8 number 2 Platoon is swept by fire from the newly deployed machine gun and lose 3 men, including their officer, meanwhile the British pour fire from the carriers and the 2 Platoon bren gun into East farm to little effect. This exchange of fire continues and 2 Platoon lose another man, and they too pull back. The British carriers open up on the Germans in East farm causing two casualties and the defence of the farm begins to collapse as the Germans are suppressed.

On move nine the German commander decides to withdraw as British mortar fire takes out the remaining machine gun and the carriers eliminate the defenders in East Farm. 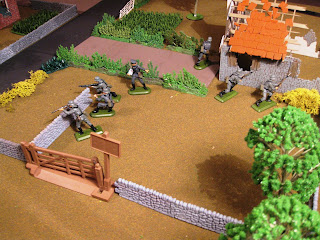 The British carrier platoon dismounts to sweep through the farm while the Germans escape off the to the southwest. 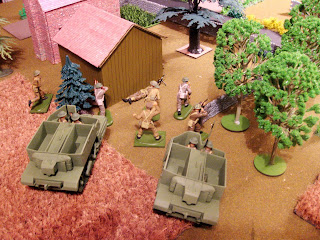 Having lost over half of his troops the British commander decides to advance no further and consolidates around East Farm. The battle ends. While the British have control of the field the German commander has done well to halt the enemy advance and inflict heavy casualties. A thoroughly enjoyable scenario.