The Action at Twee Heuvels

Having assembled my 2mm Armies, in the shape of a French and an Allied Corps, I spent the weekend setting up and playing out a small action.  I based this upon the battle in Bob Cordrey's Portable Napoleonic Wargames book, designed to be used with his army/corps level rules.

My game consisted of a meeting engagement, with an Allied corps, consisting of three infantry divisions, a cavalry division and an artillery brigade.  The French force was roughly the same size. As per the book, the Allies pushed forwards to sieze the village of Twee Heuvels and the ridges on either flank, with the Dutch division taking the allied right hand ridge and the cavalry on the left.  The third British division is moving up in reserve.

The French, seeing that the allies have taken the key ground, begin to organise themselves for an assault. This is where we pick up the action. The French move two divisions up to assault the village, supported by artillery, while the cavalry and the third division move around the flank towards the Dutch. Here is a picture of the situation seen from the French end: 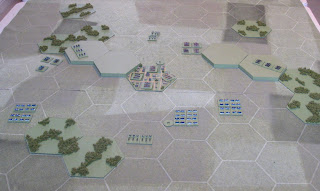 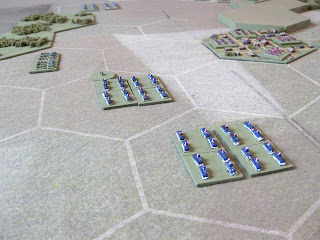 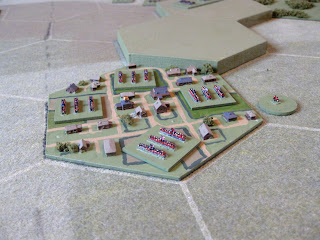 On the next move the allies move up the reserve division behind the village and the Dutch engage the French cavalry - very badly, inflicting no damage.  On their turn the French cavalry crashes into the Dutch forcing them off the ridge and causing casualties. Not good for the Allies, as their right flank collapses; 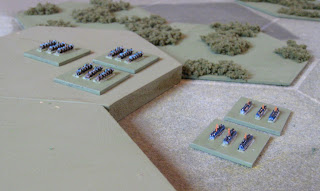 In the same move the French assault goes into the village, causing heavy British losses: 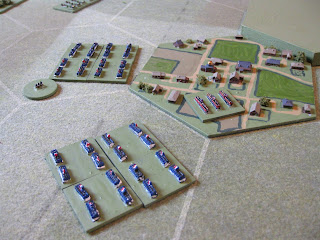 During the next turn, the allies use up their iniative points on firing at the attacking French, with little effect.  The French cavalry now finish off the Dutch division, which routs off the field and the French infantry carry the village, destroying the British 1st Division.

However, now it is the allied turn to win the initiative, the British 3rd Division, supported by the allied cavalry driving into the French 2nd Division: 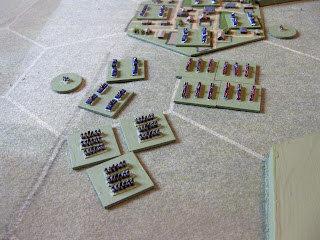 The French are destroyed and the British 3rd Division turns its attention to the village.  Meanwhile the French cavalry attempt to attack the allied artillery, but are intercepted by the allied cavalry. A major action ensues over on the allied right flank: 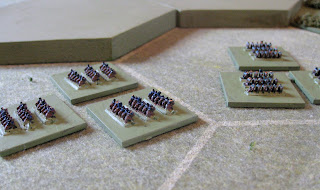 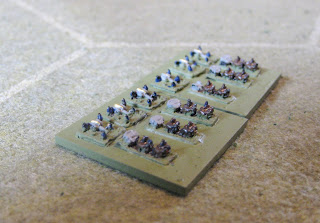 The French cavalry is all but destroyed by combined artillery fire an an allied cavalry attack.

Meanwhile, in the centre, the British 3rd Division storms into the village, taking out significant numbers of French troops, despite close support from French artillery: 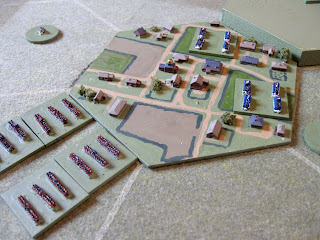 The French exhaustion point is now very close, and luck remains with the allies. Just as the French bring up their reserve division it is hit by Allied cavalry thundering down off the ridge. 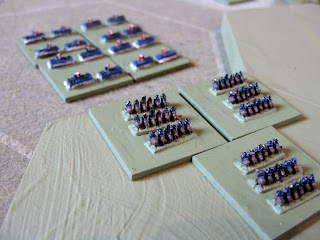 In the village French restance collapses and the battle ends. The Allies win a costly victory by holding the village and driving off the French. This was a fun game, the rules allowed things to move on quickly and the battle was over in less than an hour.  It would be easy to play with multiple corps, allowing some full scale napoleonic engagements.

These figures came as a gift from one of my internet friends. Neither he nor I know of their origin, but they have a similarity in terms of size, moulding and pose to Warrior figures; however, they are not by Warrior.  The officer is a Minifigs S Range casting and he goes well with the other figures.

Bavarian light infantry wore green jackets, with black facings, piped red, along with grey breeches, very much in the jaeger style of the period. They are painted to represent the 1st Battalion around about 1811.

Here are a few pictures: 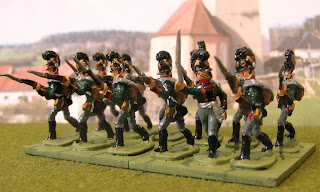 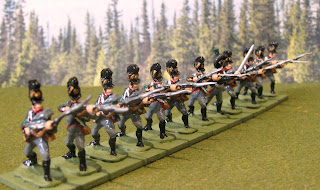 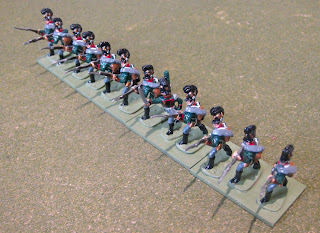 If anyone can identify these figures, I would be interested to know what make they are.

Another unit marches off the production line.  This time it is a Minifigs 25mm Confederate regiment.  The figures are listed in the Minifigs catelogue as 'Irregulars', but to me they look pretty much like most confederate infantry in the field.  I have added some browns and buff to add a bit of variety. 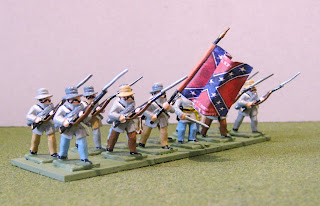 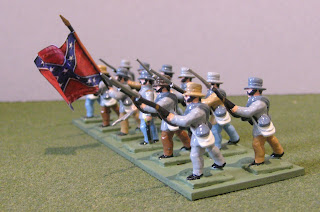 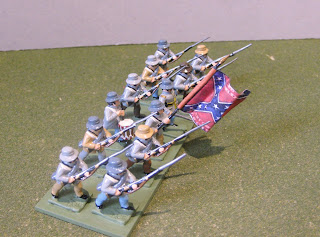 These figures were a joy to paint and quite pleasing when finished. Next in line for this project are some Union gunners. 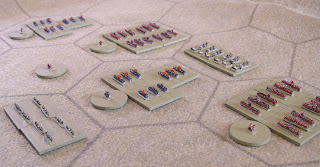 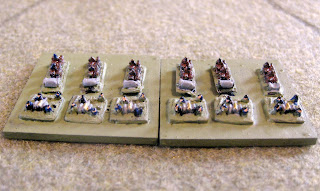 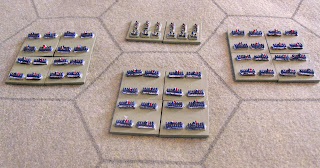 I recently purchased these figures along with some infantry.  They were well painted and just required some touching up and new bases.  They will make a useful addition to my growing Russian army.  The figures are Minifigs S range, 25mm: 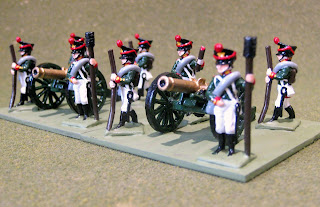 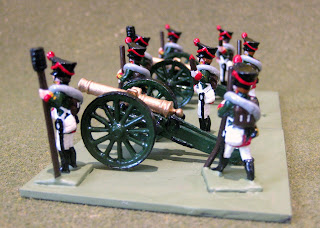 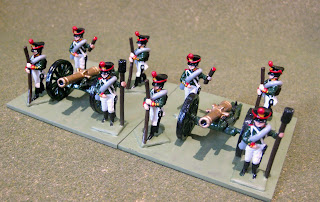 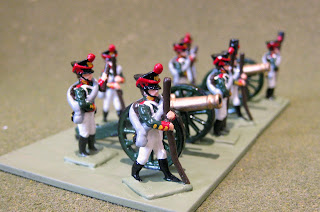 Posted by Bob The Old Painter at 05:04 No comments: