Instead of the annual Christmas viewing of Zulu, I decided to have a go at a scenario from the Command & Colors Battlecry map selection; Isandlwana.  The map, shown below depicts a scenario where the Zulu army has already deployed the two horns and the main body has come into view: 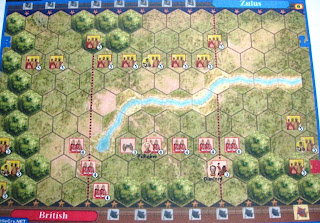 As can be seen the tactical options for the British are somewhat limited, other than stand and fight.  Durnford and his cavalry have already withdrawn back to the main position and the British force is all but surrounded.

This is what the table looked like, viewed from the main Zulu army: 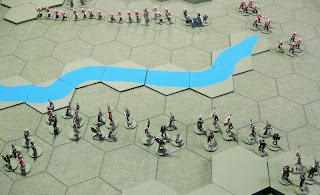 With the right horn: 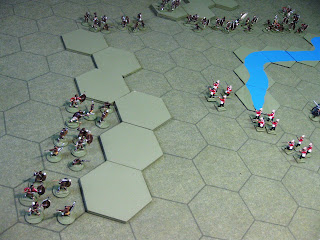 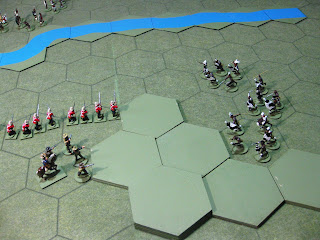 And the British firing line: 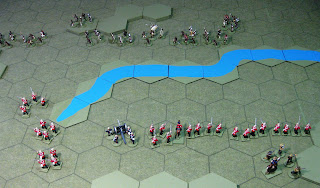 The British plan was to pull back the three units out on their left flank and attempt to form a square.  The Zulus decided to press on the British flanks to draw off men from the main firing line then deliver a final blow in the centre.

Almost immediately the Zulu right horn poured down off the slopes. 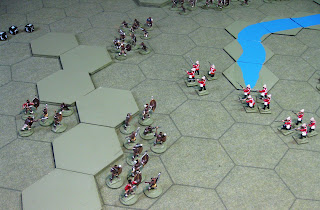 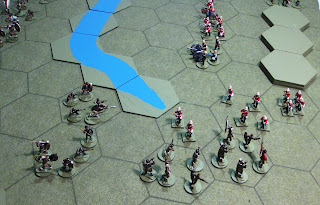 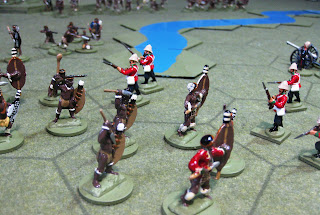 The Zulus sliced into the British left hacking down a number of the soldiers.

As this was going on a similar event takes place on the other flank as the left horn charges into the British infantry and dismounted irregular horse: 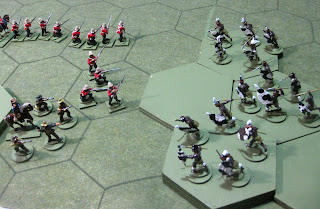 The situation looks grim for the British: 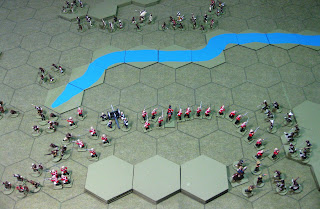 However, despite heavy casualties, first the right horn is pushed back: 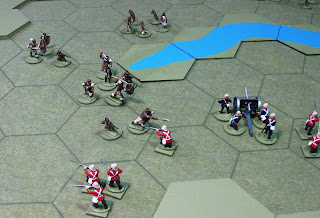 And on their right the British stand their ground, albeit having been forced back by the left horn and with many casualties: 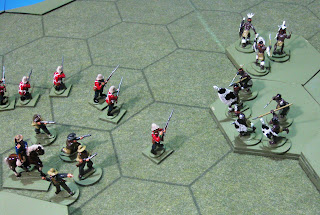 Now the Zulu main body begins to move forward, however, as the two horns have failed to draw off troops from the firing line the Zulus crossing the river are met by both heavy volley fire and artillery: 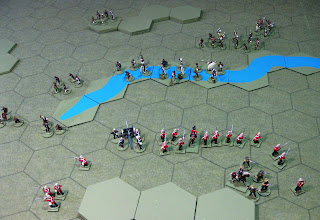 The Zulu main body is stopped in its tracks, but the Zulu right horn, having rallied pushes in against a weakened British left flank. The British gunners are wiped out and several more infantrymen fall: 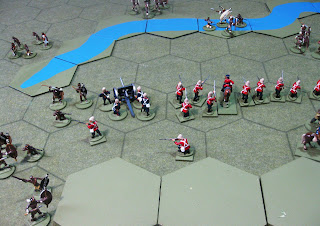 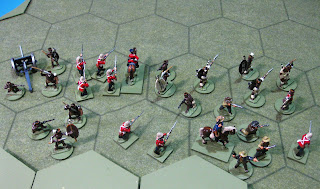 Now under pressure on the left, the British firing line begins to falter allowing the Zulu main body into contact and the situation looks dire for the redcoats.  This is the Zulu high watermark.

Successful volley fire and a couple of bayonet charges tips the balance for the British (and some lucky dice rolls!). The Zulu now have reached their exhaustion point with well over 50% casualties.  They break off the attack.

The final situation as the much depleted British force holds their position at Isandlwana: 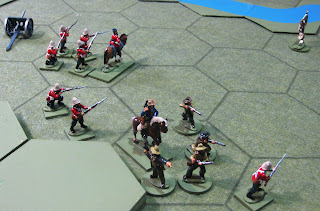 An unexpected result, but a fast and enjoyable action.  I must try the Rorkes Drift scenario!

Work has continued on creating the 6" hex table top.  The rivers are completed as are the hills and road sections.  I have constructed a bridge out of balsa, although I need to finish this off as it is currently in its base coat.

Here are some pictures with a few of Bob Black's GNW Russians to give an idea of scale: 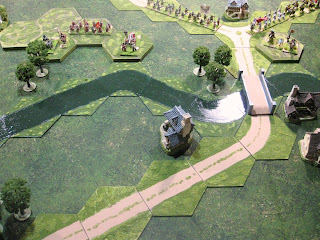 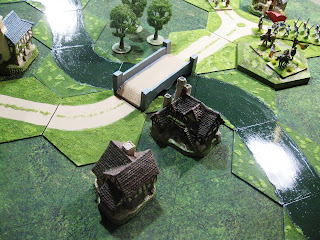 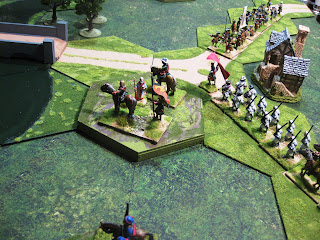 The buildings are from Lilliput Lane, David Winter series, which I picked up for less than a £1 each.  They were a bit chipped, so have been touched up.

Time for the Swedes to deploy methinks!

I haven't posted for a while as I have had little show and have not played any games.  Instead, I have been undertaking several projects.  The biggest has been the creation of scenic tiles to support my 6" hex gaming mat.  This required the usual hills, roads and river sections.  I have been trying to match up the colours to blend in with the mat, using flock.  As can be seen, there is still some way to go: 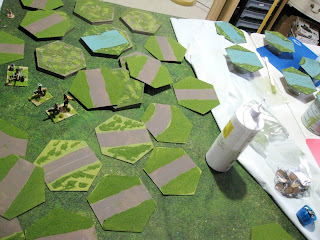 I have also been completeing some colonial projects, including some Zulu War British infantry and artillery, as well as some irregular cavalry. Here are the cavalry.  They are made up from odds and ends purchased on eBay and the chap with the sword was donated by Bob Black: 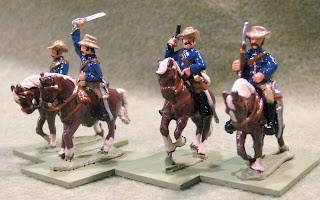 To add to my Zulu army these Irregular Miniatures Zulus have also been completed.  One is dressed in a Royal Artillery uniform jacket, just for a change from the usual scarlet: 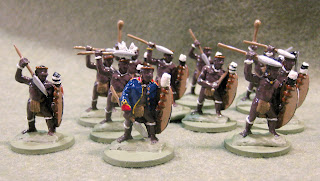 Last weekend I finished a second Sudanese unit which now joins my growing colonial British army.  The figures are by Barry Minot and were part of a large group of 25/30mm figures that I bought a couple of years ago: 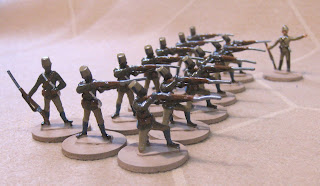 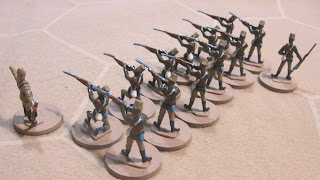 These troops are wearing the brown woollen jumpers common to Sudanese troops on campaign. Not sure if the guy at the rear is taking a leak, or maybe just reloading!