The first of Eric's big cavalry units, consisting of 18 figures. Again I have spruced them up and added some minor details. On the base these figures are annotated: Prussian Cuirassier Regt No 1. So, that is what they shall be: 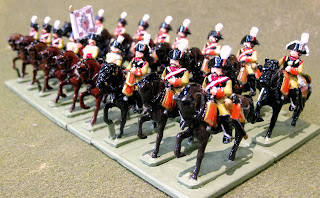 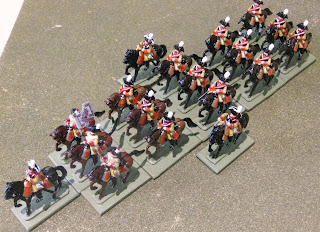 Having decided to increase the size of my SYW units, first off is an Austrian Line Regiment. These are very old minifigs that have been lurking in my collection for a couple of decades. I bought them not realising that the varnish had gone really yellow and so I put them away for a rainy day. However, they were of the right number to fit in with my new plans and they have received a spruce up and new bases.

They represent Austrian Regiment Nr. 50 Harsch, with their white uniforms with red facings: 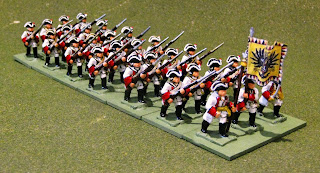 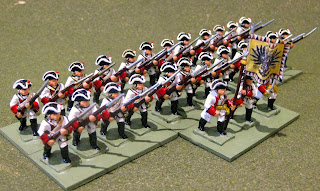 I am happy with this arrangement and will organise all of my SYW infantry units along these lines.

Last night I varnished and painted the bases of a small sample of the collection, just to see how they would look and how easy it would be to carry out.  Varnishing was time consuming and painting the bases proved quite easy, although getting into three horse stands required care.

First off is a small unit of Prussian Mounted Jaegers, which included an even smaller group of foot soldiers to represent the unit dismounted: 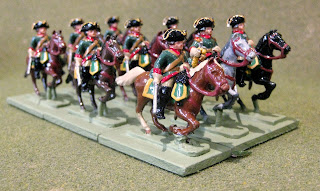 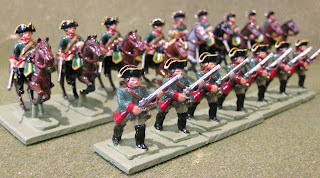 I also gave the same treatment to a Prussian artillery battery and a general figure: 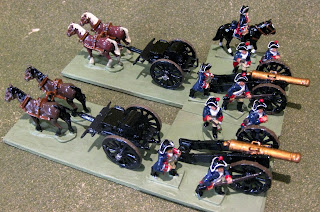 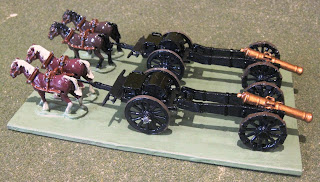 And the guns with their crews: 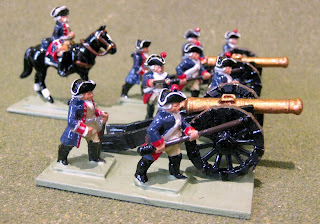 I am quite pleased with the results so far,

Over the past year I have been accumulating a significant number of unpainted 25mm Seven Years War (SYW) figures by Minfigs, enough to build several European armies.  At the outset I decided to follow previous unit organisations, with 12 figure units, based to fit my Command & Colors hex mats.

However; on Friday I received the final batch of figures, which were all painted and based and were originally part of the Eric Knowles huge collection.  My initial plan was to reorganise and base these figures in my usual way. That was until I saw them.  Mostly cavalry, the figures are organised into large regiments of around 18 figures, with a significant amount of artillery guns, crews and limbers.

I decided that I could not break up these units and decided to to keep them whole. At the same time I dug out this small book: 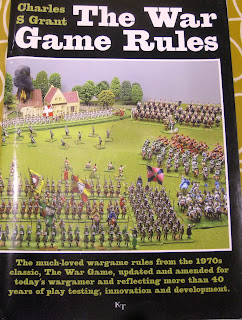 These are the rules from the classic book 'The Wargame' by Charles Grant, which usefully has a section on playing with smaller units than the 48 figure battalions used in the original,

So, my SYW project is going to be based on the above rules using half size units.

A large portion of my 25mm Russian Napoleonic cavalry is made up of Del Prado 'Relive Austerlitz' figures.  These look quite good and match the Minifigs quite well, however, it has always been my long term aim to replace these with proper Minifigs castings.  So far I have assembled a Minifigs Dragoon Regiment and a Hussar Regiment.  Today I finished off my second Hussar Regiment.

I always find painting hussars a challenge an with so many small details it is hard to do them justice with gloss paints. This latest unit is the Izumsky (I have found so many different spellings of this name) Regiment, red dolman, piped white, blue breeches and blue pelisse.

Here they are ready to take to the field: 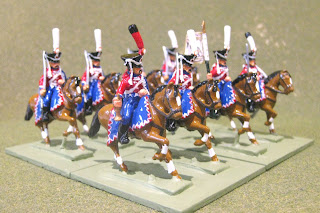 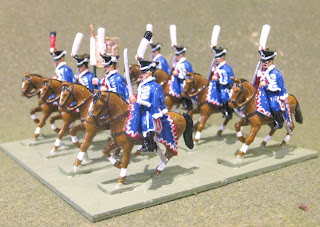 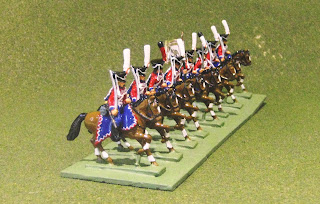 Next, some French Dragoons, that I have already started.

One of my favourite uniforms is that of the British Grenadier of the American War of Independence and I think these 25mm Minifigs castings capture their spirit very well.  They were a joy to paint and I can't wait for their first outing on the wargames table: 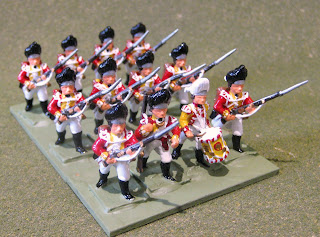 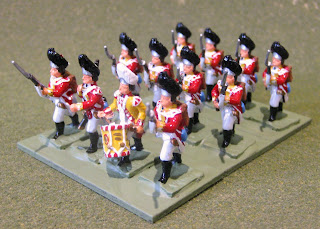 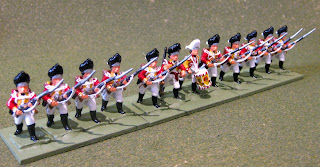 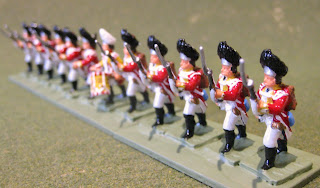 Started before Christmas, last night I finished off this pair of French line artillery units. I have to say that I am really pleased with the way they look. The figures are from the Ros 25mm range and these particular specimens are originals that I purchased in 1976. At last they take to the field in their correct uniforms: 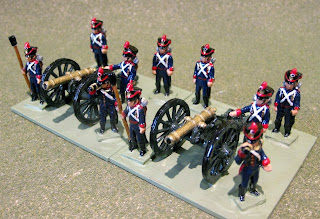 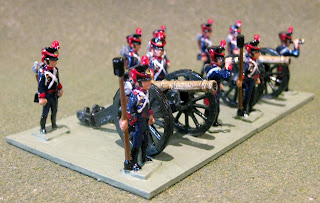 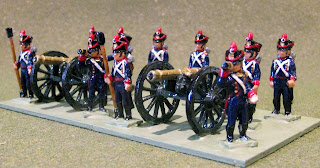 The first unit to take to the field is this batch of Minifigs S Range Carabiniers.  This unit has been cobbled together over several years by picking up these figures as they have turned up for sale from a variety of sources: 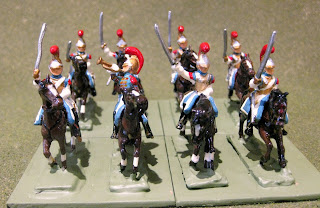 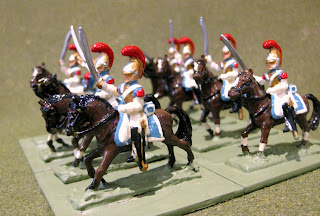 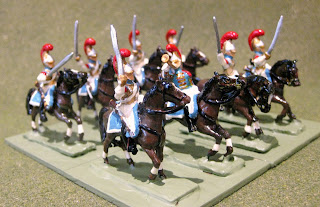