Another heavy cavalry unit joins my Spanish forces, this time Cuirassiers in the splendid red tunics.  Also from Warior Miniatures, these lovely figures were fun to paint and look the part as they join the ranks of the Spanish Army.  I will need to send off to John Holt for some light cavalry next. 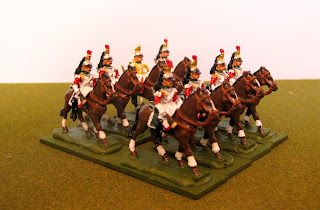 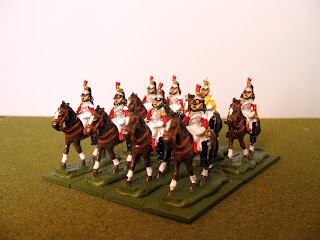 Several people of asked me about using Warrior figures to fill gaps in old Minifigs S Range collections. An area that does need filling are in the Minifigs cavalry ranges, as only the British and French napoleonics had command groups. So, Russian, Austrian Minifigs and several other states have just a limited selection of figures. The same can be said for artillery figures, which were produced, but today are hard to find. 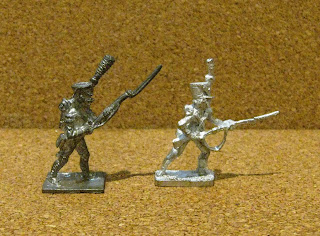 I think cavalry figures work much better, again Warrior on the right: 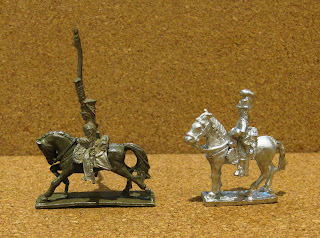 It can be seen that the two cavalry figures are about the same size, but the Warrior horse is taller. However; if you put a Warrior figure on a Minifigs horse, the match is very good: 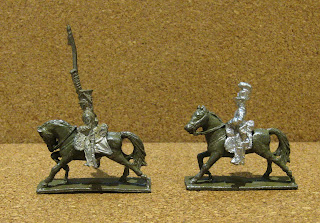 Swapping the horses around, as the left one is a little smaller: 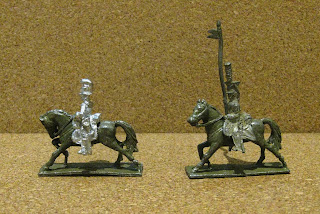 There you have it. I did do some comparisons of Austrian artillery in an earlier post, but could do some side by side shots as above, if that would be useful.

Next off the production line are these rather smart dragoons; 25mm figures from Warrior Miniatures. As with all of these vintage casts they are fun to paint and produce a pleasing result.

The Spanish cavalry certainly add some colour to the field, with these bright yellow dragoons. Next up will be some red coated cuirassiers! 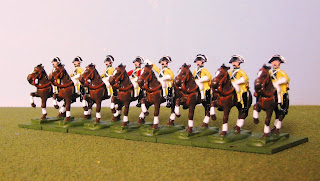 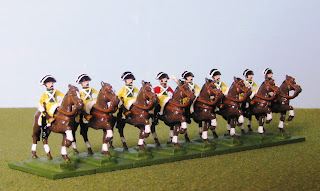 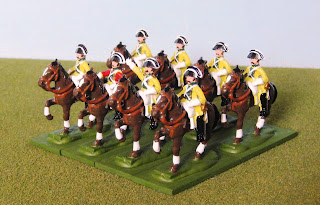