Having cobbled together  a set of tables for movement, visibility and firing for tanks based upon hexes, I need to think about unit size and the area they occupy. Starting off with Grant's book 'Battle' and also looking at other rules by early wargamers, including Wise, Featherstone, Lyall & Son, Quarrie and Asquith, there seems to be a consensus that one tank model represents a platoon/troop and a group of three models represents a squadron. If I were to go along with this, it would make sense for one tank to represent a 'unit' and a unit fits into one hex. Thus a Company/Squadron can be made up of 3-5 tanks, occupying the same number of adjacent hexes.  I have decidd to have three tanks per Company and set out would look like this: 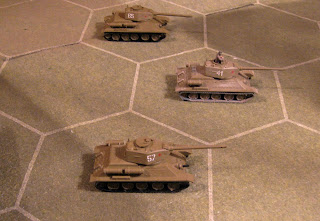 Using the same model my Battalion/Regiment, would be nine tanks and would look something like this: 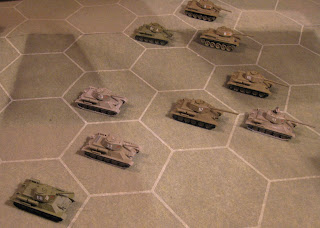 This is likely to be close to the limit of tanks on my table, possibly I could add one more company; but I think it looks about right. Any more tanks per hex would be too crowded. For the time being this is what I will go with.

Whilst looking at this issue, I decided to give some thought to infantry structures.  Looking at the same sources they all have settled for an organisation of 10 - 12 figures representing either a platoon or a company.Most have a leader, 4-5 riflemen, a couple of submachine (SMG) gunners, a light machine gun (LMG) team and an antitank (Atk) team; although Grant does not have any heavier machine guns at this level in his rules. I have settled on a leader with SMG, a two man LMG, a second SMG, four riflemen and two Atk men; giving a unit of 10, which I will call a platoon.  I tried this on my table, but sqeezing so many figures in to one hex did not look right at all.

So, I have decided that an infantry unit can occupy two adjacent hexes, looking like this: 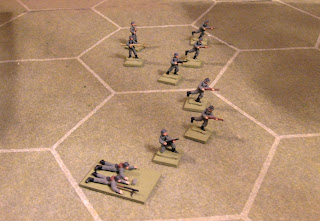 Three of these units/platoons will make up a company, with an additional command team: 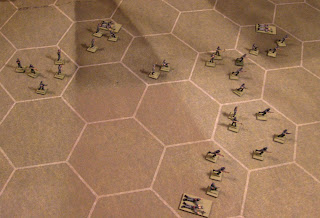 Three companies put together will create a battlion. In addtion to the above, a battalion will have a support comapny, with a heavy machine gun platoon, a mortar platoon and heavy anti-tank platoon, as well as a command group. Eachsupport  platoon occupies one hex; although I will probably allow these platoons to split when on the table. In such a case they would have to be adjacent to at least one unit. In this example I have used Russians, as illustrated here: 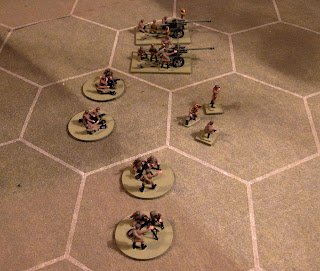 Next I hope to play test the armour rules; although I am also thinking about how to convert Grant's infantry rules so that they work on a hex table.