I haven't played a game for ages, and for some time I have been thinking about an air wargame, inspired by the neat rules in Bob Cordery's 'Developing the Portable Wargame' book.  These simple rules allow for a fun fast moving game.  At first I tried it out using a couple of 1/144 scale ME 109s and a couple of Hurricanes. It was OK, but I found that, for me, it did not work too well being played as a solo game.

What I needed was a fixed enemy.  Now I have some 1/600 scale Lancaster bombers and I thought I could create an enemy consisting of targets, fixed air defence units all on a hex based table.

I used the industrial and AA markers from the Axis and Allies board game.  The idea being that each Lancaster has a strength of 3 points (SP) and a hit from an AA gun costs one SP. The Lancasters have to fly through the air defence network to reach the target, which has an SP of 4.  The aim being to fly the bombers in without being shot down and to destroy the targets, in my game there were two, with eight bombers in two waves of four.

I added a rule that if an aircraft can be engaged by two or more AA units at once, the defender could dice (D5,6) for a searchlight cone, which in turn increased the hit probability. This is what ir looked like:

The first wave of Lancasters head for target one: 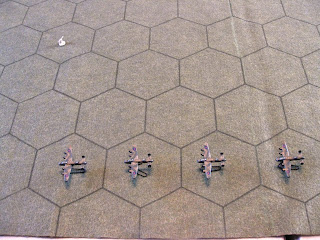 A Lancaster over the target, that has already lost one SP: 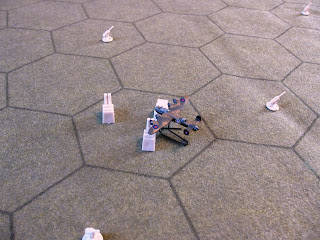 A Lancaster is 'coned' by searchlights: 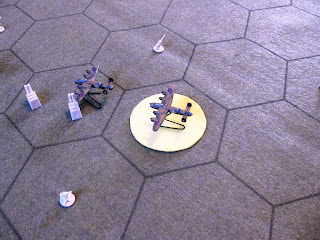 The raid completed the Lancasters head for home, still being shot at by the flak units, damage to the aircraft is denoted by the white spots on the wings. 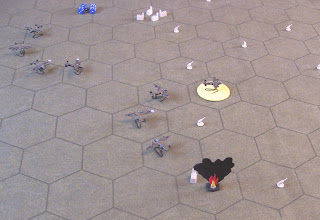 In this game the primary target is hit and loses three SPs, The secondary target (at the top of the above picture) is untouched. One lancaster is shot down, two are damaged, one losing one SP, the other two. They will not be able to take part in the next raid. This means that there are only five Lancasters available for tomorrow's raid, the damaged Lancasters being out of the game for one round and two rounds respectively.

Overall this all worked well. The AA units need a D6 to hit an aircraft, but this is decreased to D4,5,6 if the aircraft are in a searchlight cone. The destroyed Lancaster suffered this fate. I enjoyed playing this as I only had to concentrate on the Lancasters, the enemy being completely static.

I will see how raid two goes.