The Battle for Mount Hoedown 1982

June 1982 and British forces are closing in on Port Stanley, but Argentine forces (FAA) hold a series of rocky mountain tops that shield the port .

In a move to secure a key peak that overlooks the line of advance for the main British force, a battalion group consisting of 8 PARA, with artillery (FOO) and naval gunfire (NGS) observers as well as other supporting elements are to stealthily sail into Penguin Cove aboard RFA Sir Gregory, under cover of darkness and move quickly ashore to carry out a night attack against Mount Hoedown, approaching from the West. 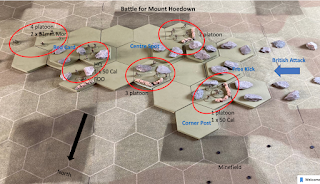 Mount Hoedown is defended by an infantry company supported by a platoon of Marines and two 81mm mortar sections.  The FAA believe the threat comes mostly from the north and mines have been laid and two .50 cal machine guns in sangars cover the open ground in this direction.  The mortars have also a number of DFs covering likely approaches.

Things do not go well for the British from the outset.  Sir Gregory is late departing and arrives in Penguin Cove three hours late.  It is imperative that she is back out to sea well before first light due to the enemy air threat.  The delay means that only half of 8 PARA is able to land (B & D Companies) with their artillery observers.  Most of the heavy weapons and the Forward Air Controller remain aboard. A Harrier strike is scheduled for 07:00 on RED CARD.  8 PARA will have no way of adjusting this, having to relay messages via Brigade HQ, rather than talking directly to the pilots.

Abandoning the operation is considered, but seizing Mount Hoedown is key to other operations against other FAA positions.  So, it is decided that D Company will race forward and capture the first knoll known as FREE KICK.  B Company will pass through and clear CENTRE SPOT and RED CARD. A mortar section will support along with two sections of machine guns.

At 06:30 D Company is approaching the western crags and so far has not been detected by FAA defenders: 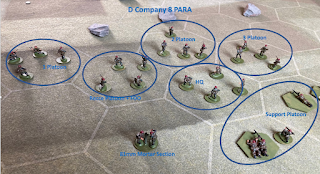 Almost at the crags D Company is spotted as FAA troops turn to the west and mortar rounds begin to land amongst the paratroopers. Two soldiers fall, one killed and one wounded: 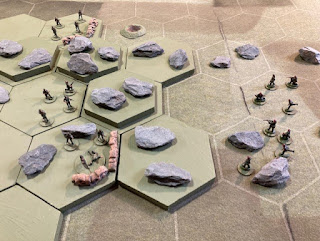 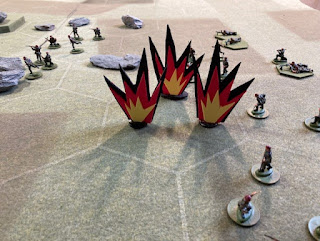 Under cover of smoke from the British mortars D Company edges closer to the crags: 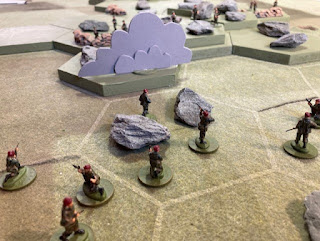 By 06:50 the paras assault the west end of the feature hoping to bounce the defenders. Two FAA soldiers fall and confidence is high. 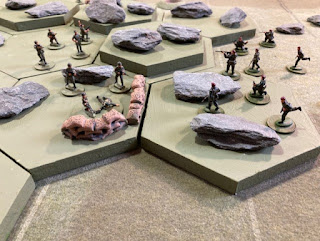 However, the FAA are well protected by the rocks and their defences and they bring down heavy fire and D Company casualties begin to rise as a major close quarter firefight ensues.  The FAA put up a very strong defence: 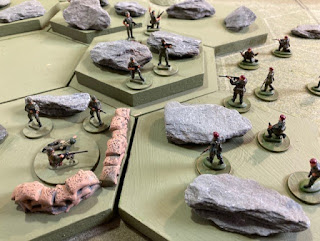 At around 06:55 B Company arrives and begins to move up to relieve D Company and push on towards RED CARD: 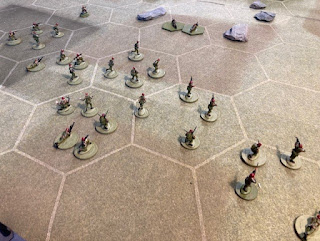 The CO of 8 PARA had decided that the airstrike on RED CARD should go ahead and prays that the attack is accurate.  At 07:00 a Harrier streaks in and drops two 1000lb bombs smack on to RED CARD and destroys the FAA HQ platoon, killing two: 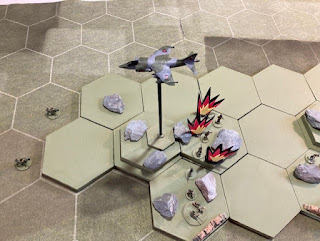 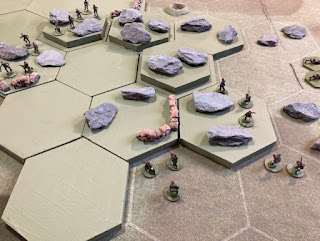 A mortar attack on B Company, still in the open ground, causes their first casualties: 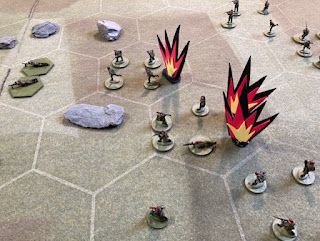 B Company consolidates on FREE KICK and attempt to position the NGS officer to bring fire from a supporting warship onto the FAA positions.
The next few turns were taken up by both sides consolidating and with B Company moving up to the crags.  However, before B Company can go firm the FAA mount a spirited counter attack with mortar fire support and rush back towards FREE KICK: 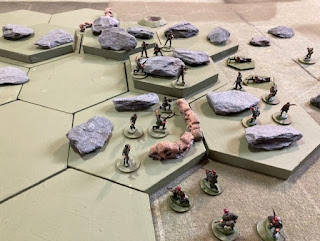 The struggle for FREE KICK sees more casualties amongst D Company, including the loss of the NGS team, but as B Company arrives and a determined effort by the remnants of D Company the FAA are pushed back with heavy losses: 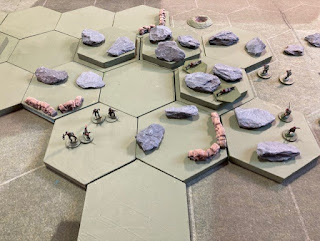 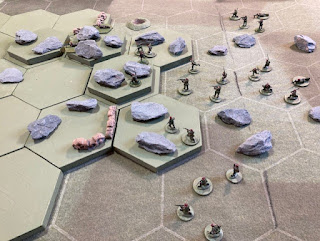 and the FAA concentrate around RED CARD, but begin to realise that the weight of British fire will overwhelm them, but they do not give up easily as their mortars hammer down on B Company: 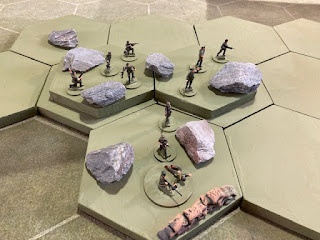 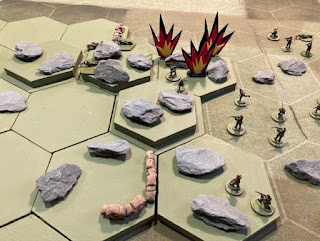 With artillery support, and smoke from the British mortars B Company begins the assault on RED CARD: 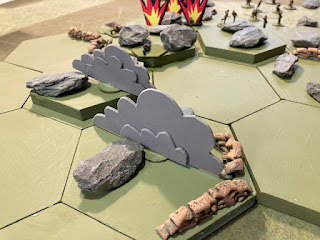 105mm artillery crashes down on RED CARD causing more casualties and with the threat from B Company the FAA commander decides to withdraw: 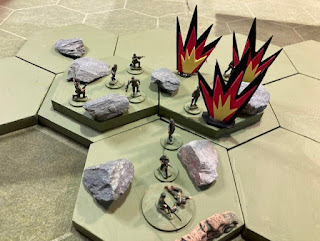 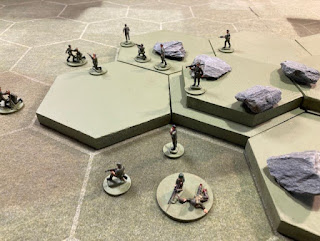 At around 07:40 the battle ends and B Company occupies RED CARD.  It has been a very costly victory for the British, with 7 dead and 25 wounded (out of 60), while the FAA have just 2 dead and 15 wounded (out of 29).  It is a narrow victory for the British but D Company is totally non effective.
I used modified Memoire '44 rules for the game. the troops are plastic Matchbox paras and ESCI figures for the FAA. The smoke and artillery shot markers are home made.
Of course there is no Mount Hoedown, or 8 PARA, other than in my imagination.
Posted by Bob The Old Painter at 01:05