Our most recent battle was another Command & Colors Napoleonic scenario, the battle of Ligny 16th June 1815.  This was played the day after we fought Quatre Bras.  This time William and I played the French while Phil played the Prussians. 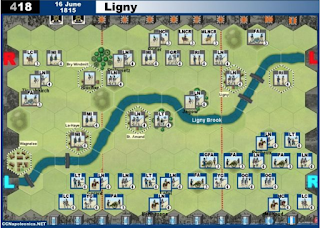 As can be seen from the map the battlefield is divided by Ligny Brook, with the Prussians defending the north bank using a string of villages and woods.
The picture below shows the French right flank with the settlement of Ligny with its twin bridges.  The bulk of the French army, including most of the artillery and the imperial Guard are positioned on the right: 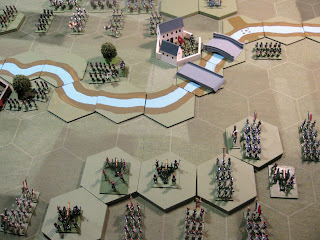 The centre and left (from left to right) has the villages of Wagnelee, La Haye and, on the south bank of the brook, St Amand.  Again the Prussians are occupying the villages, apart from Wagnelee: 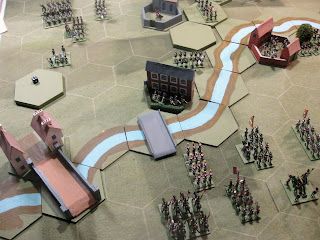 A view of the battlefield from the French right, with Napoleon himself in attendance! 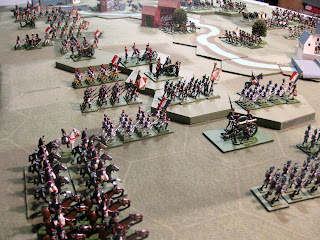 Battle commenced with a sustained artillery attack by the four French batteries on the ridge, causing some damage to several Prussian units.
A small action took place on the right flank when a Prussian infantry regiment, supported by artillery pushed forward and destroyed a French regiment; however, they were quickly beaten back, badly mauled. 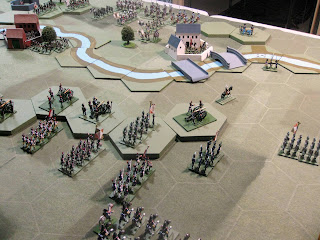 Artillery exchanges continued on the right flank, but a second Prussian advance, this time on the French left forced a French response. Of concern was the arrival of a Prussian artillery battery deploying onto the knoll behind Wagnelee, which began firing into the flank of French columns. Also fresh Prussian infantry units moved forwards. 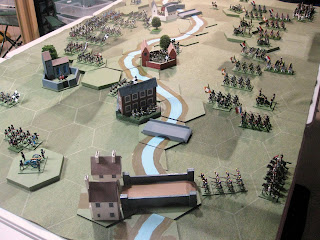 The French rapidly pushed a couple of battalions over the brook and light infantry rushed into the village to drive off the Prussian gunners, but they were met with grapeshot and had to withdraw into the shelter of the buildings. The Prussian battery remained an annoyance for the rest of the battle. Meanwhile the french capture La Haye with heavy casualties, but Fresh Prussian units soon drive them out again: 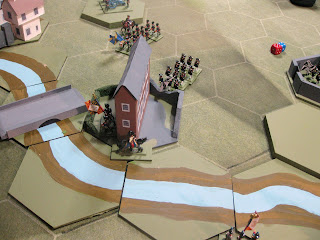 The battle now was concentrated almost entirely on the left flank, although the french artillery continued to bombard the centre and the right. A pattern emerged, with the French storming the buildings, but were then forced out by Prussian counter attacks.  Most of the Prussian units on this flank were Landwehr and they suffered heavily. 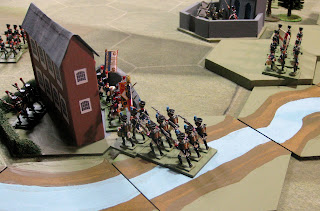 The battle became one of attrition with the Prussians taking huge numbers of casualties as they attempted to regain lost ground.  Bit by bit the French edged forward and St Amand fell.  A counter attack by Prussian Cuirassiers supported by infantry failed to dislodge the French and soon the Prussians reached their exhaustion point and it was all over.  The French claimed a huge victory with a score of 11 - 5.  Revenge for our defeat the day before!
I have played this scenario solo before, but it was much more enjoyable with a 'live' opponent.