Today I fnished the last of the British units, completing the scrap box project. I have enough figures, generals and guns to play the Command and Colors 1815 scenarios, with all the right models. This has given me a Dutch Belgian contingent, with 6 infantry units. A gun battery provided by Minifigs and a Del Prado general and cavalry: 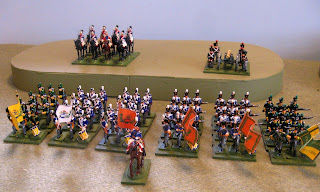 Then there are two British Brigades. The first consists of the 2nd Foot Guards, the 42nd Foot (Black Watch) and the 4th Foot: 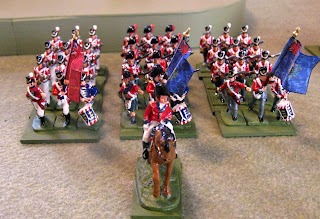 The second Brigade has four units; the 1st Brunswick Line, the 30th and 5th Line and the 92nd Highlanders: 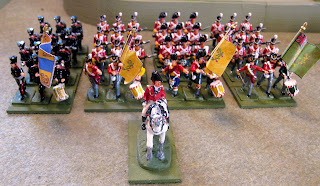 With a light cavalry Hussar regiment, a foot battery, as well has a heavy cavalry brigade, with its horse artillery the British contingent looks like this:

Putting the whole lot together, adding a battalion of rifles and senior commanders we have the allied army:

The cavalry are all Del Prado, as are the rifles and most of the commanders.