Last time I dug this game out I had a go at setting it up and learning some of the rules; however, I was a little disappointed with the aircraft models, in that the game is more strategic where the models represent a raid of multiple squadrons.  Thus, the models are purely representative. I thought it might be better to try out the type of markers used during WW2 in the Ops Rooms, which indicate a complete raid.

I made up some markers that reflect the units in the game, but also look like the real markers.  These were printed out on card  and stuck to a wooden base. I made some sticks to push them around too! 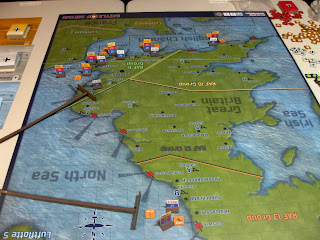 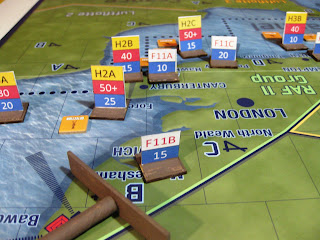 I then play tested a scenario with a German raid being intercepted over the SW coast. The markers in the top centre of the picture below represent two British squadrons of Spitfires and one of Blenheims vs a German bomber formation of three squadrons with no fighter escort.  The Germans were wiped out. 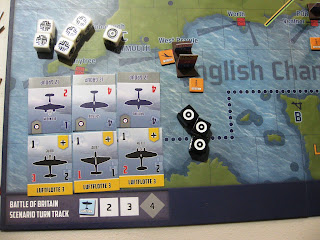 The markers worked quite well, although it became quite difficult to work out which group each marker belonged to, so since taking these pictures I have painted the marker bases to match the various group colours.  I will give this game another go, although I need to revisit the rules to check out some minor points.