That venerable old school firm Warrior Miniatures caters well for the main protagonists of the napoleonic wars but there is limited coverage of the minor states.  There is a Brunswick element in the British section of the catalogue, but only for the Lieb Battalion with  the distinctive long coat and horse tail plume, but no line troops. Thanks to the work of Jeffers there are some Saxon troops available but that's about it.

I needed some of the minor nations troops for the 1815 campaign, so I set about paint converting some of my abundant French infantry casting.  Jeffers also upgraded these figures but as far as I know were never put into production.  John Holt the owner of Warrior Miniatures sadly has suspended the production of the Warrior range due to illness.  It is not know when or if production and sales will resume.

My idea is to paint a few battalions of German and Dutch troops to supplement my allied army.  So far two units have been completed. 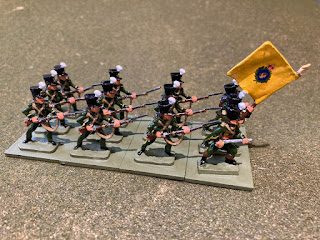 And a Brunswick battalion: 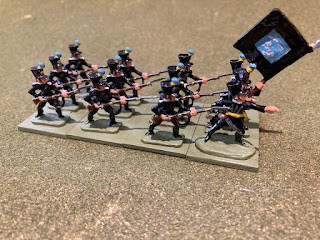 I will add to these units occasionally.