Peninsular Warriors and the Spanish Ulcer

I have had a plan to recreate some of the battles fought during the Peninsula War for many years, but have never had the troops to do so. All of my Napoleonics, until recently, have been painted and uniformed for the 1815, 100 days campaign period. I could have used them with some wargaming license, but I don't like doing that.  Two things have inspired me to have a go at this fascinating campaign, or series of campaigns. Firstly, I purchased a Spanish Napoleonic Army from that very nice man John at Warrior Miniatures. I went down this road as I did not want to spend a fortune on this project and he sells 25mm infantry for 50p and 100 piece armies for around £35.  The second trigger for this project was the article by Conrad Kinch in a recent copy of Miniature Wargames. He fought an action using 20mm soldiers and command and colors rules. I took the bait and out came the paintbrush. So far I have painted four Spanish infantry units and a couple of batteries of guns.

I also have painted a unit of French infantry and discovered several British infantry and cavalry units that had been sitting unused in boxes since the 1980s. The same search revealed some French cavalry too. All of these are by Warrior Miniatures.  I started to dust them down, touch them up and re-base them.

Warrior f25mm Napoleonic figures do not seem to have a very big fan base; however, I like them, being a sucker for the old school style toy soldiers!

Here are the first of the Spanish; first artillery and the first line regiment: 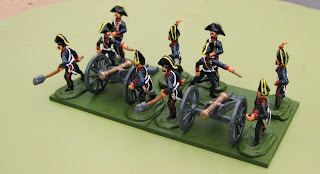 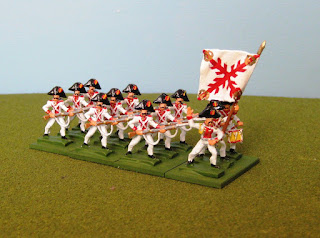 I will post some more pictures shortly and as the collection grows.
Posted by Bob The Old Painter at 07:50