This was to be the last major land battle during the Crimean war, fought between the allied French, Sardinian and Turkish forces against the Russian field army. The Russians launched their attack in the early hours of 16 August 1855 with around 58,000, mainly infantry, troops. Their plan was to attack the allies in the rear across the Tchernaya River in an attempt to break the siege of Sevastopol. This would be their third and final attempt to do so, having failed to succeed in doing this at Balaclava and Inkerman.

The allied force consisted of mostly French troops, supported by Sardinians and some Turks, that were positioned along the North edge of the Fedioukine Hills. The photo below gives an overview of the main part of the battlefield, with allies at the top of the map and the Russians at the bottom: 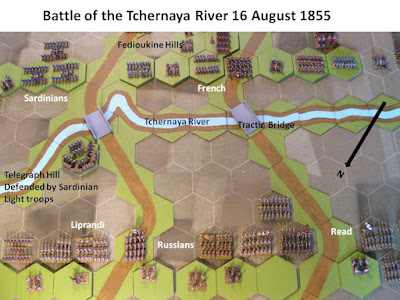 For this game I am using a gridded board, with 5 inch hexagons. The rules I will use will be an adaptation of Bob Cordrey's portable war games system. Here are some further views of the battlefield and opposing forces:

Off to the right, not shown above, are the Turks, the Sardinians can be seen in the background: 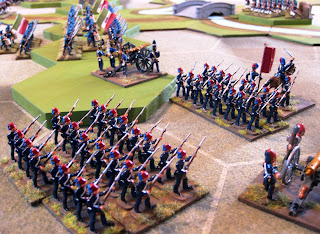 Forward of the allied line is a small hill, known as Telegraph Hill, which covers one of the river crossings. This was defended by Sardinian light infantry behind some field works: 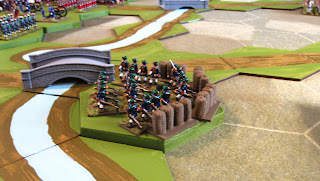 This is the allied centre, with French troops guarding the key Tractir Bridge. 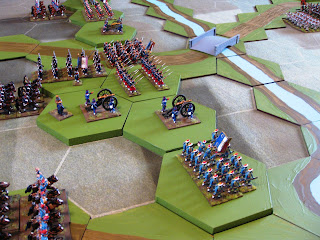 The French left, with the Tractir Bridge in the background 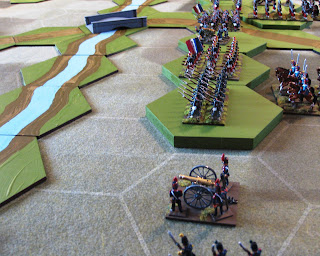 An overview of the allied centre from the left. 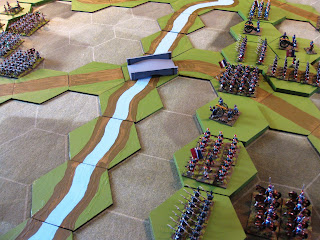 On the Russian right is Read's Corps: 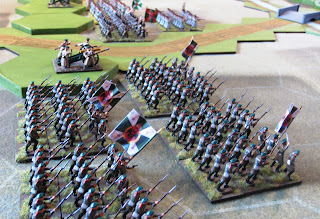 While in the centre and left we have Liprandi's Corps: 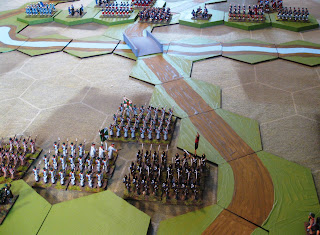 From the Russian left the Telegraph Hill feature can be seen in the background: 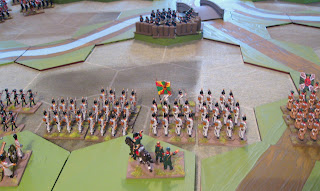 Finally a look along the Russian line from the left: 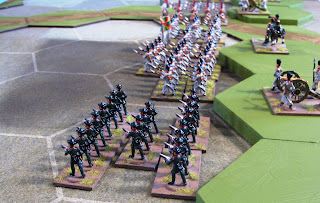 Some notes:
The Tchernaya River was a deep wade, with difficult banks. There was also a second water obstacle; an aqueduct which ran parallel to the river. I have not included this using the river to represent the complete valley floor, as in reality there were also ditches and dykes. To reflect this the river will restrict movement, taking a complete turn to cross, except via the two bridges.

The hills are quite steep giving the defender higher up an advantage.

In the real battle the command and control of the Russian forces was poor, leading to a piecemeal attack before they were properly prepared. I will reflect this at the outset.