I have been reading with interest about a growing move towards playing games that involve whole armies fighting, rather than a couple of Brigades or a Division on the table. Inspiration has come from sites such as Bob Cordreys developing Napoleonic game, as well as Hexblitz and other sites, such as the Napoleonic Wargaming Blog; Napoleonic Wargames

In most cases a grouping of units, which would be about a brigade on my table, represents a corps, with four or five 'corps' making up an army. I have tried this to some extent with Command and Colors by using figures, but even this does not give manoeuvre feel of a number Napoleonic corps widely dispersed.

With this in mind I have dug out my old 'big fat' 25mm Minifigs and based them along similar lines to those described in the blogs.  I am just about able to field an Austrian army: 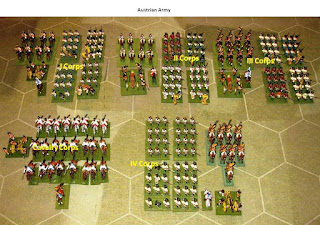 This army consists of five 'Corps'. Four are infantry consisting of four blocks of 12 troops, a gun, a cavalry unit and a command figure. The fifth corps is a cavalry corps of three units of heavy cavalry and a horse artillery gun.

I have organised the French in a similar way: 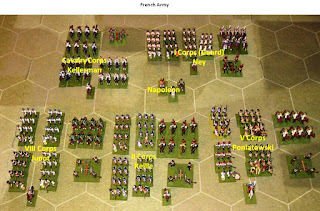 My plan is to devise a mechanism, whereby the battle will start with one or two Corps in contact and the remainder marching to the sound of the guns. The table will be divided into entry sectors and the marching Corps will arrive in one of those sectors, with a D10 time delay. This should make for an interesting game.