These soldiers were a real joy to paint. Consisting of Minifigs S Range recasts from Old John, they are a mix of different ranges. The command group are from the S Range Turkish Crimean War range, while the soldiers are in fact S Range French Napoleonic Egyptian Infantry (F22). I am not keen on the infantry poses in the Crimean War series, which is why I went for these; besides, Egypt contributed several thousand troops to Turkey during the war and the uniforms appear correct. They probably should have a green flag, and I may produce one at a later stage. I really like these figures and I can feel the urge to purchase some more! 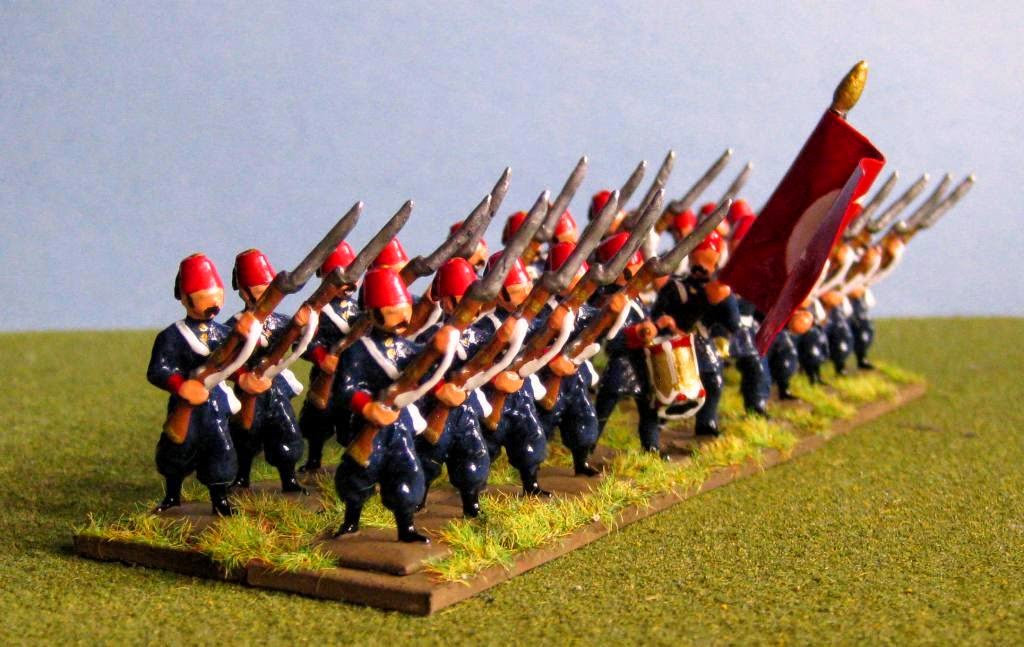 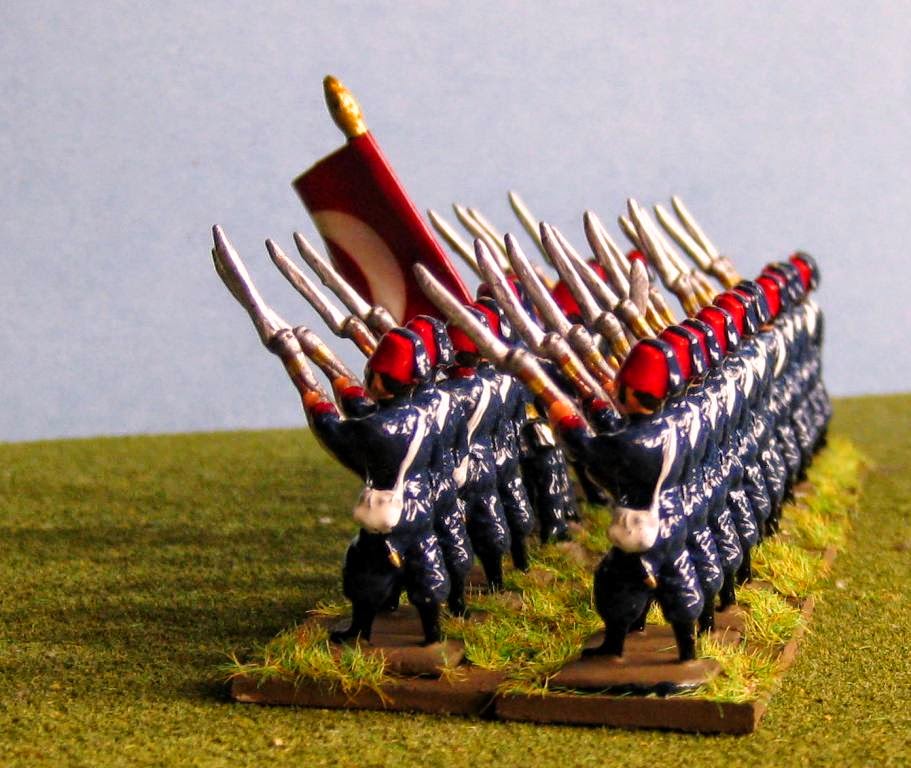 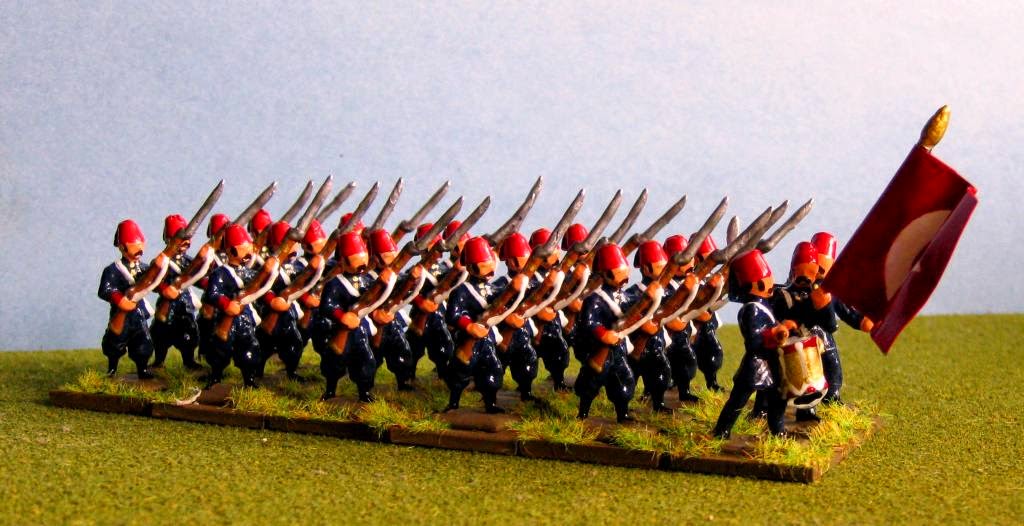 There will be a lull in production for the next couple of months as I am moving house.

This rather splendid figure is a Minifigs S Range one piece casting that came with some other figures as a sample from Old John. He has been sitting in a box for ages, so a couple of nights ago I decided to paint him and really liked the result, The figure is a true 25mm and is thus a little large for Douglas range, but he does look the part: 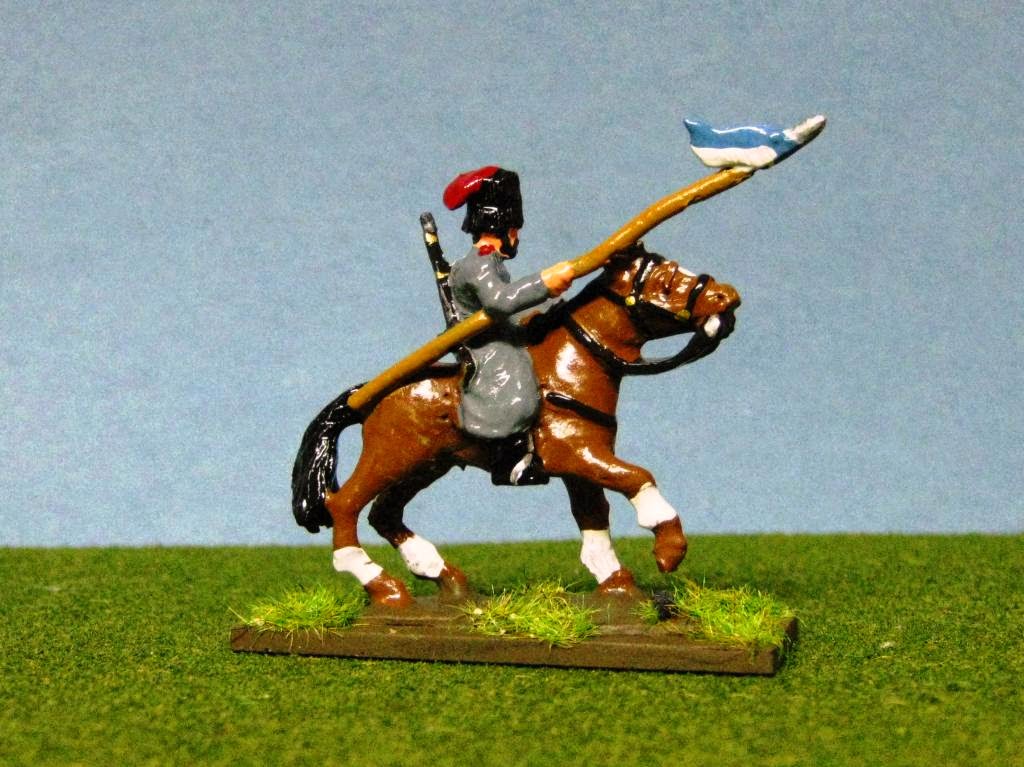 Meanwhile work on the Turks continues.
Posted by Bob The Old Painter at 12:44 3 comments:

Here we have another batch of Douglas Miniatures F1 Zouave figures, but this time painted as Algerian Tirailleurs, in French service. I was attracted to the sky blue uniform, with white, red and yellow tasseled turban. The officer, drummer and standard bearer are by Wodensfeld. All the figures are available from John Cunningham's  ranges. 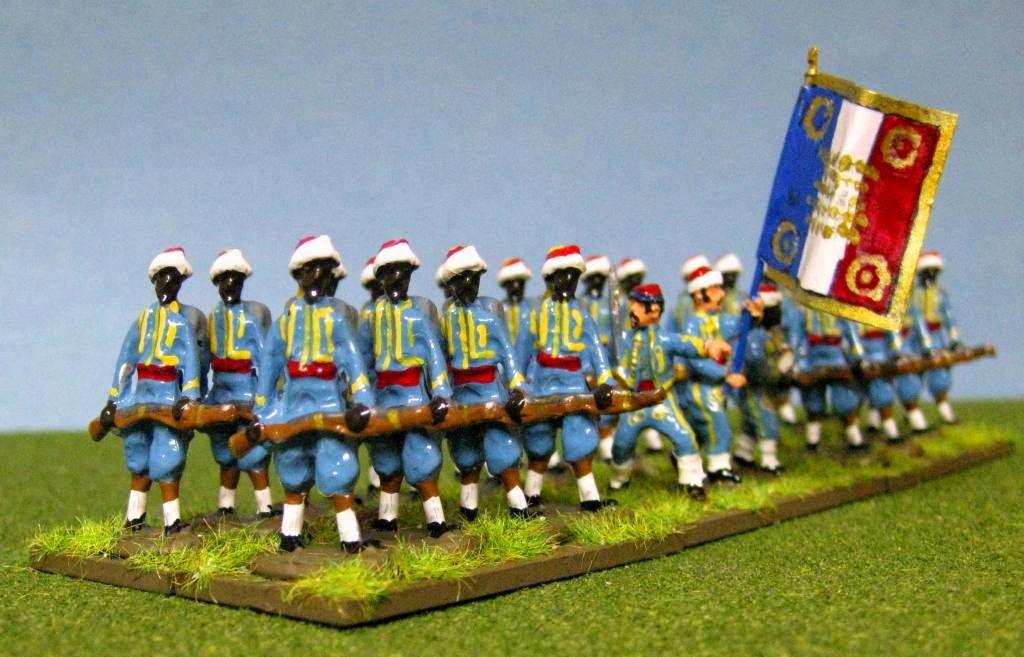 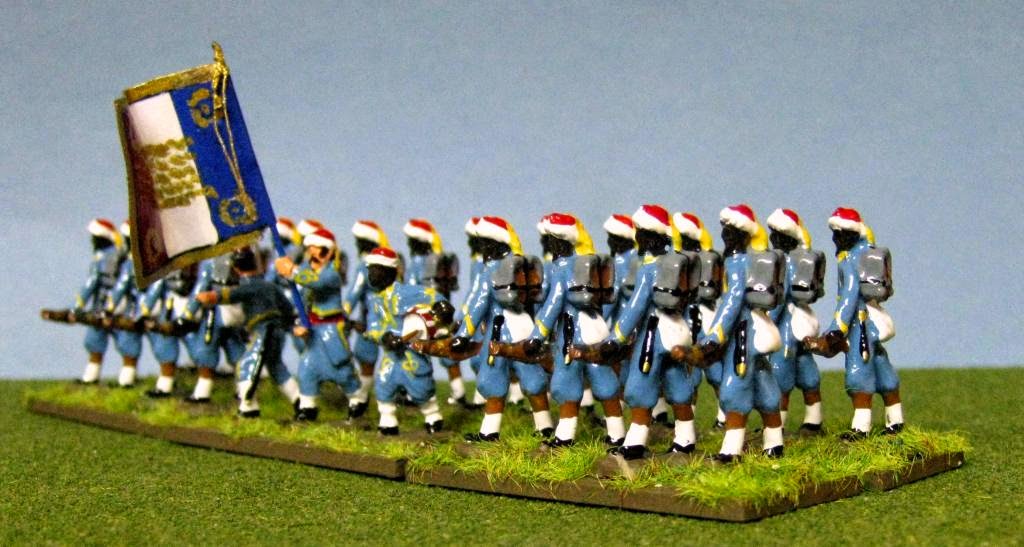 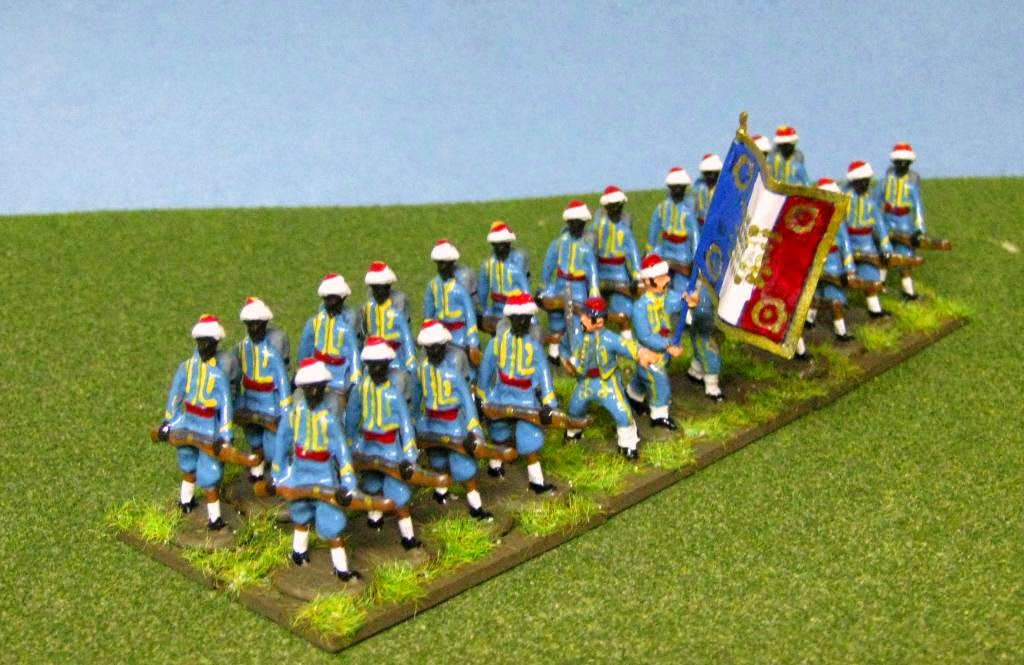 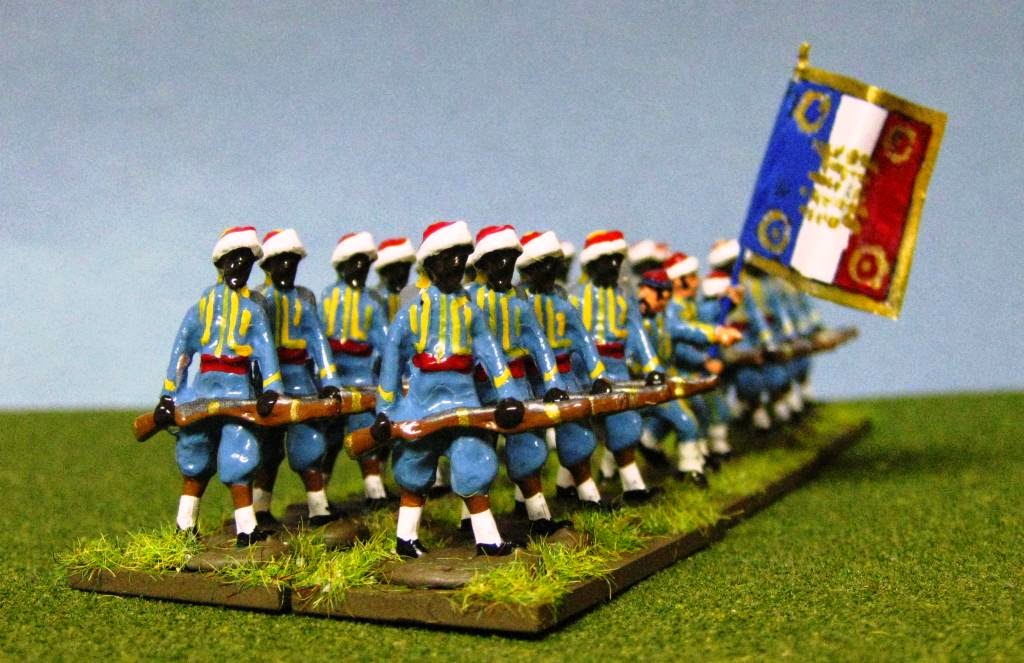 I have almost finished a batch of Minifigs S Range Turks, which will join the collection shortly.

With the limitations in the available castings - I am sure there are more out there somewhere, it is necessary to make simple conversions of figures. I am currently starting to create a Russian Naval Battalion, using the soft hatted advancing figure. As mentioned before there are no command figures available, although according to original publications they were made, or at least were planned for the range.

At the moment the only solution is to swap heads between figures. I thought I would share my technique, which is simple, but a bit fiddly. Here I have used a helmeted officer figure and carefully sliced his head off using a sharp modelling blade. It would be possible to simply glue a new head on him, but given the tiny area in contact, it would not be a strong bond. Thus, some kind of peg will be needed.

For the new head I chopped one off an advancing soft hat soldier, again being careful to try and match the angle of cut on the body (otherwise the new head will sit at an odd angle). The peg is made from the thin wire found in a bag tie, with the plastic stripped away (see pic). Using a pin vice and a tiny drill, a hole is prepared in the body, followed by the insertion of a small length of the wire (about 5mm, you can just see this in the picture). This is secured with superglue. I then let this harden for a couple of hours. While that is going on a similar hole is drilled into the head. 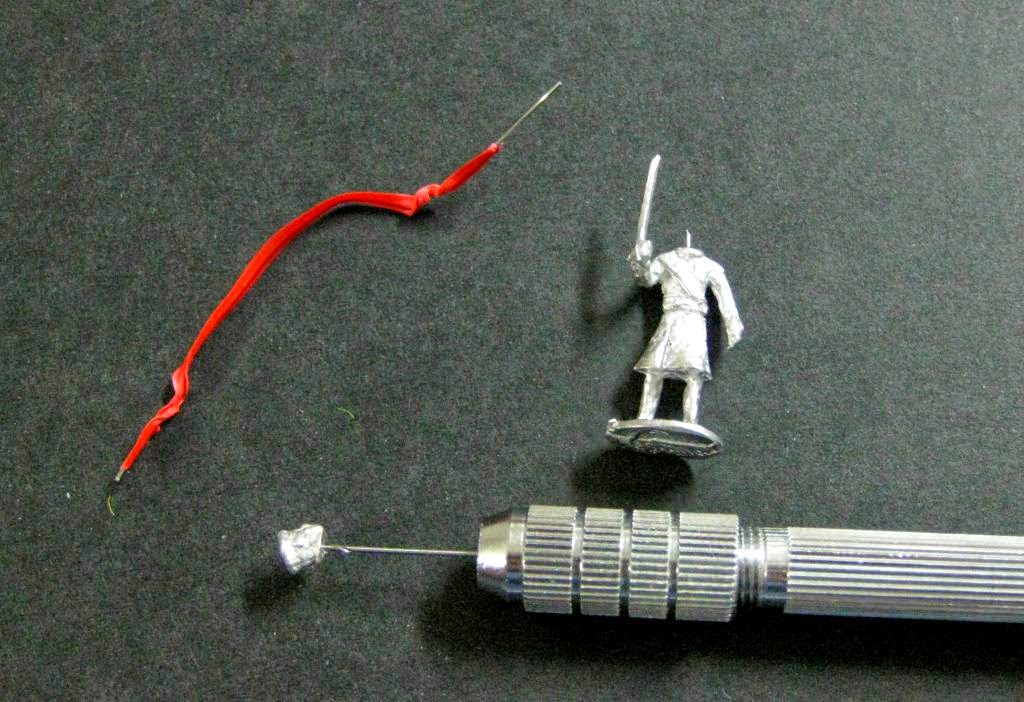 A bit of fitting is needed and the wire peg may need to be trimmed, but the next step is to pop the head on, again securing with super glue. I leave the whole thing to fix over night and that's it, job done. 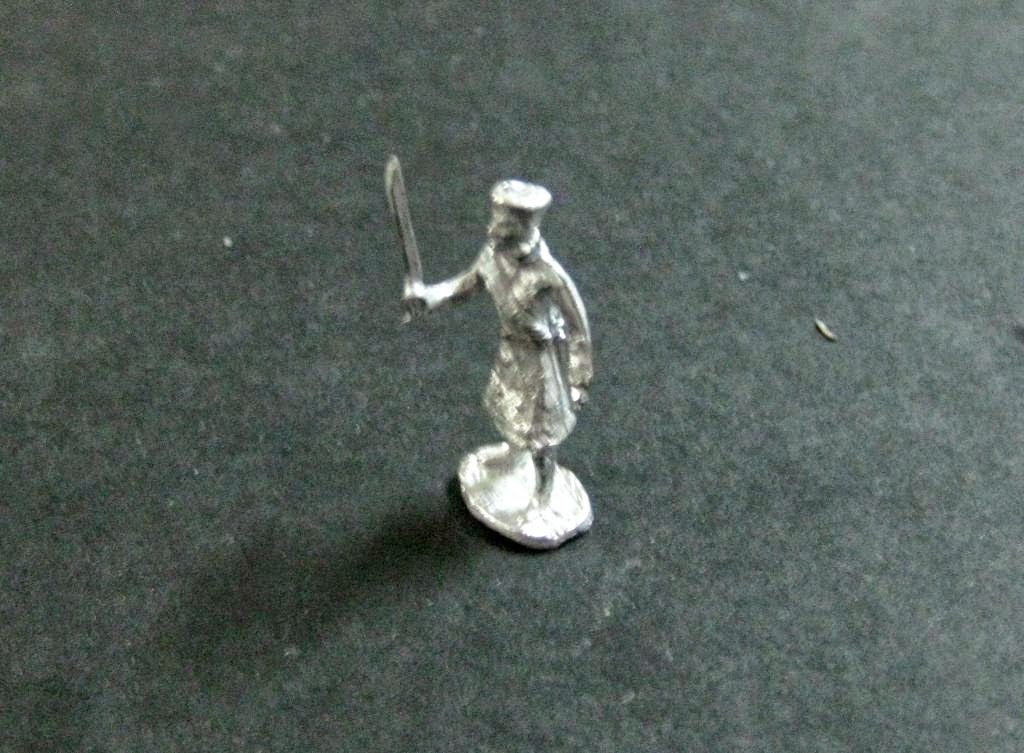 Email ThisBlogThis!Share to TwitterShare to FacebookShare to Pinterest
Labels: Conversions

Production has been slow in recent weeks, as I have let work get in the way of painting and we have been very busy. I recently bought a few 25mm Minifig S Range Turks from Old John, as the Douglas range lacks Turkish troops and Scruby do not make them either. I had my doubts when I fisrt saw them as some of the detail is vague and the figures themselves are somewhat larger than Scruby figures. However, they have a real charm about them and when painted look quite good. Here is a picture of the completed crew and gun: 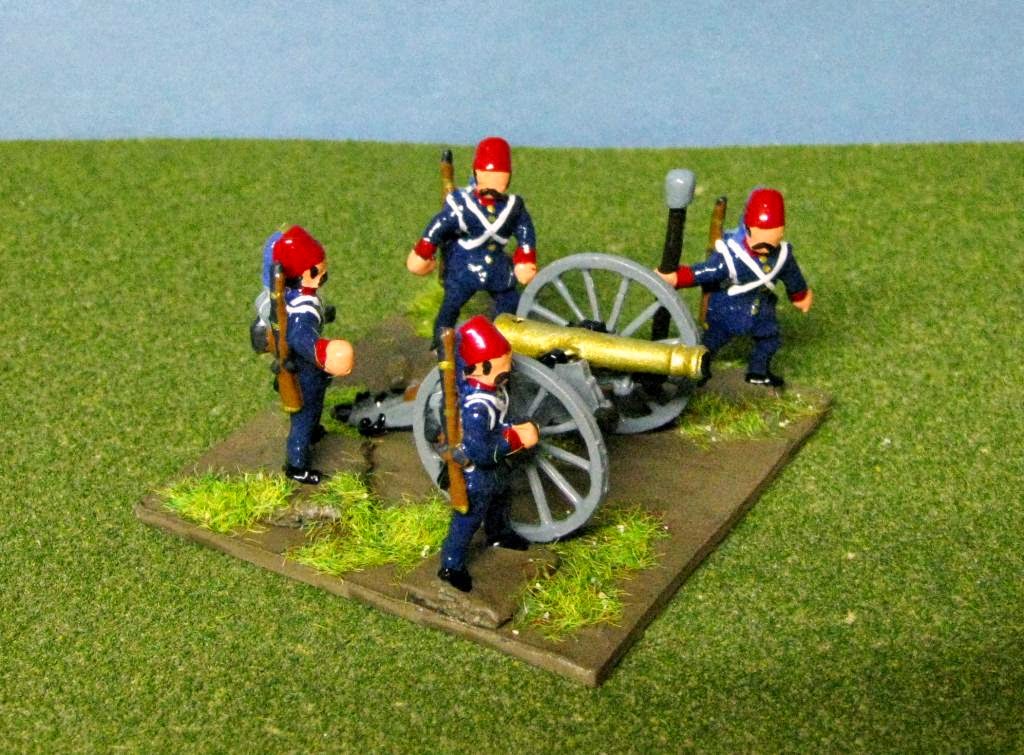 In the pipeline, close to completion I have another unit of Scruby ottoman infantry, plus some Douglas Miniatures French Zouaves, which I am painting up as Algerians.