A hot day on the gun line - Day 1 at the siege of Sevastopol.

Having set this game up, I have been working out how best to play it. I plan to use Battle Cry rules with some slight modifications to weapon ranges. Also, I will not be using the cards, but will use D6 dice to activate units; this is largely because the action, when it takes place, will likely be in just one sector of the board.

The game will be played by ‘days’ each lasting ten turns.  Guns have sufficient ammunition to fire for three turns each. Each salvo is marked by a ‘puff’ of cotton wool. This means each side will have to manage resources well, as resupply will occur at night. There may not be enough supplies available to replenish all the guns in one night.

At night each side will roll a D 10 which will give them activation points. These can be used to resupply gun ammunition (one point per gun, giving three turns of fire), or the points can be used to repair damaged earth works/guns or to move reserves up to the line. Reserves are limited to those available at the beginning of the game. This means that the allies will have about 15 fresh battalions and the Russian around six.

I am anticipating that the allies will attack on one day, but, if unsuccessful, will have to spend a few nights replenishing before going on the offensive once more. Meanwhile the Russians can repair damage and bring in fresh troops to the defences.

The action points will limit the size of the allied assaults too. This should all make for an interesting game.

So, the first day consists of an exchange of fire with the opposing guns blasting away at each other. On the allied side it is mostly the French guns that attempt to destroy the guns in the Mamelon – to no real effect. Some of the British guns also add to the fire.  After five hours, with ammunition running low the firing fades away. 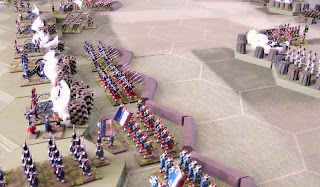 The Russians reply with their heavy guns to pummel one of the British heavy batteries, killing the crew and destroying the emplacement: As night falls both sides start to resupply. The Allies roll an 8 and decide to resupply seven batteries and repair/replace the destroyed battery. The Russians are less fortunate as they roll a one.  This means that only one battery can be resupplied, leaving some guns dangerously low on ammunition for the next day!