After a further drenching of the siege lines the rain finally stops and amid huge political pressure from London, Raglan gives orders for the British 2nd Division to assault the Redan, following a three hour preparatory bombardment.  The British begin their preparations; however, the weather changes again and the morning is greeted by a thick blanket of fog that has rolled in off the Black Sea. The British gunners advise Raglan to postpone the attack as they will not be able to fire the guns.  The infantry commanders, keen to at last get to grips with the Russians, having been humiliated by the French for their inaction, urge Raglan to order the attack. The British commanders feel that the fog would allow the infantry to reach the Russian defences unseen. Raglan orders the assault.

At 7am the British leave the protection of the trenches and begin to move forward: 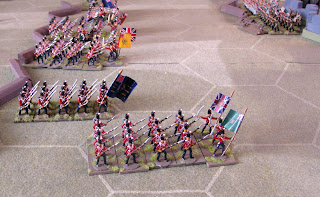 However, by 8am the British are still trying to organise themselves with the added confusion of trying to form a Division into line in dense fog, without alerting the Russians in the Redan. 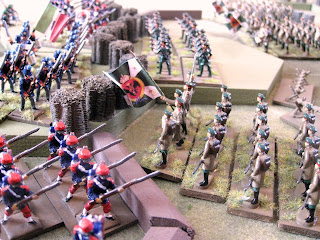 The Russian assault quickly overwhelms the forward French defenders and a Caucasian regiment pours into the Mamelon defences: 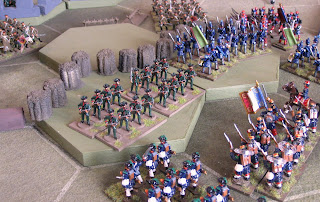 A second Russian regiment pushes forwards and the Sardinian defenders collapse. The Russians take the Mamelon: 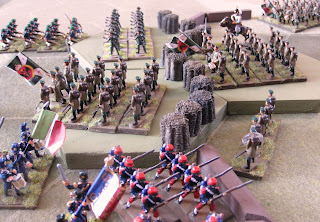 On the other side of the field the British begin to advance, but at 9am the fog begins to lift giving the Russian gunners a juicy target, with a whole division spread out across the open ground. The allied staff on the home ridge witness carnage as shot and shell plough through the British lines. One Regiment halts and pulls back in confusion. 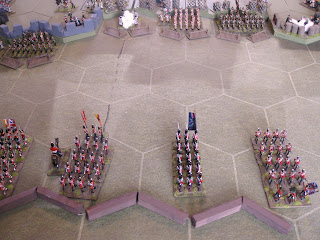 To their right the allied commanders can hear the crackle of musketry and emerging from the smoke is a steady stream of allied soldiers fleeing the Mamelon. A Russian flag can be seen flying from the ramparts.

Over at the Mamelon Sardinian troops mount a counter-attack and a regiment of Bersagleri force their way into the defences, crushing the Caucasians: 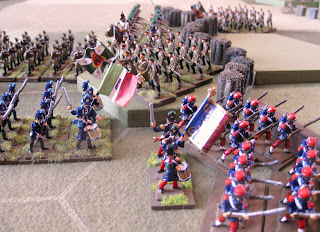 The Allies gain a toehold in the Mamelon once more, but the Russians again break through and the Sardinians are ejected: 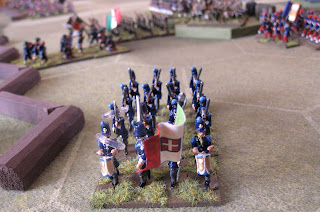 Over on the left, the British have reorganised and advance steadily towards the Russian lines, as cannon fire continues the mow down their ranks: 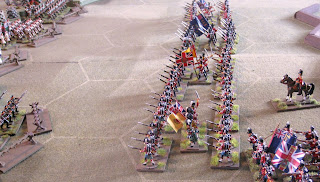 Once again on the right the allies attempt to mount a counter-attack against the growing number of Russians in the Mamelon, and have some success initially: 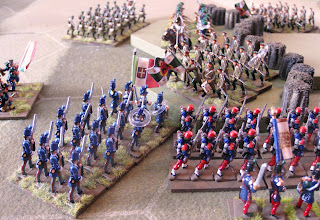 But the exhausted French and Sardinians are spent and now outnumbered. Fighting uphill against the buoyant Russians becomes futile. Soon their is just a single French unit remaining: 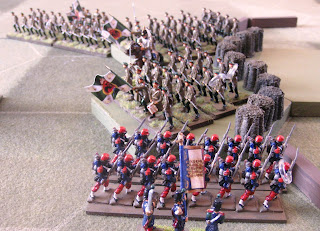 Although causing some damage to the Russians the French unit is unable to hold on and is soon heading for the rear. The Mamelon has been lost!

On the left the British assault reaches the walls and a highland regiment smashes into the forward defences pushing the Russians out. 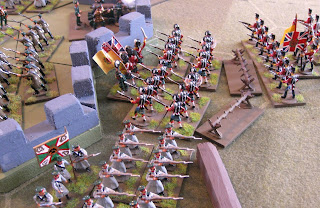 With a cheer the British surge forward, but they are caught in a deadly crossfire and soon the highlanders are no more and canister and musket balls cut into the following ranks: 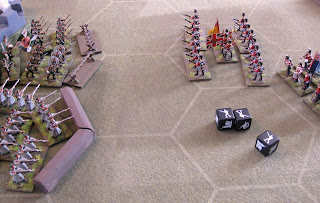 It becomes evident to the British commanders that this assault cannot succeed and the order is given to withdraw.

As the evening sets in the allies lick their wounds and take stock of the situation. They have lost the Mamelon and there are insufficient troops to retake it, without significant reinforcement. The British 2nd Division failed in its attempt to take the Redan losing half of its strength.

Amid the political row during the following days and cries for commanders heads to roll, Raglan and Pelissier resist pressure to mount another futile assault, but decide to reorganise and bring up additional men and guns - but there will be no attack for several weeks.

This phase of the siege draws to a conclusion and it is a resounding Russian success, having recaptured the Mamelon and destroyed most of the allied forces on the right and having given the British a bloody nose on the left.

As a game this battle was very enjoyable, being broken down into short daily chunks.  The mechanisms worked well and allowed a complicated campaign to be played out without becoming bogged down in the detail.  At the end I think the result was a fair reflection of reality and the limited command and resupply points mimicked the inept command and logistics evident in the Crimea.

There is scope for a second attempt at a later date.