Having conferred during the night Lord Raglan and French commander General Pelissier agreed that the French should have a go at assaulting the Mamelon. Accordingly all supplies and action points would be allocated to this attack.

At 9am four French regiments rise out of the forward trenches and advanced towards the Russian position. 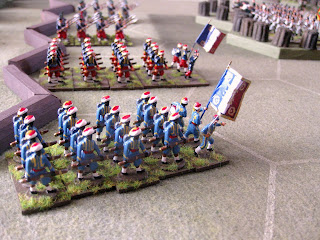 Immediately the light infantry on the left come under fire from the 32 pdrs up on the Mamelon. They waver under the hail of shot and pull back to the safety of the trenches. However, the Zouaves, Algerians and a French line regiment continue on, but soon another French unit is forced back. 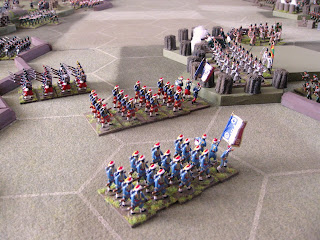 The Zouaves reach the wall and begin to break in causing some Russian casualties.  Then the Russians counter attack. The Zouaves are all but wiped out and in the next turn all of the French pull back towards the safety of their own lines. 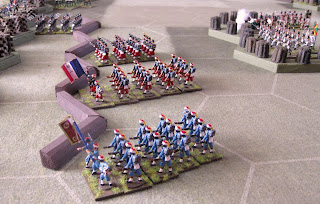 The French are severely bruised, but they have destroyed one Russian regiment and damaged another.

The French artillery begins to bombard the Mamelon, this time aiming for the Russian infantry, causing more casualties. A second French assault is also unsuccessful and two of the French units are destroyed.

French reserves move, including a Guard Regiment and reorganise themselves for another assault. 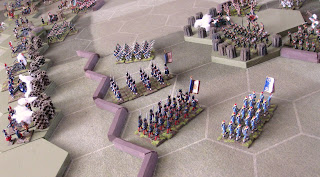 The Russian take advantage of the lull and move up more infantry into the Mamelon, just in time to receive the second French assault.  This time the French have a little more success, although one of the French line regiments is destroyed by a mix of artillery and musket fire.

The French guard and a line regiment reach the defences and storm into the Mamelon, sending a Russian regiment to destruction: 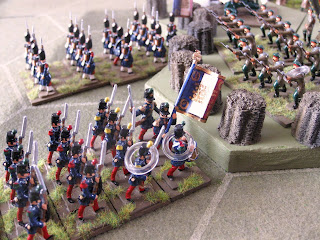 however the other French units are not so successful and are forced back.  The Guards are now on their own inside the Mamelon. 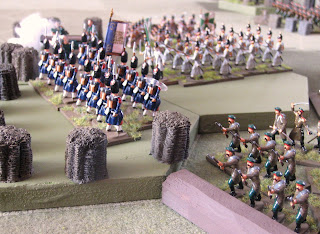 The Russians immediately counter attack and the French Guard are overwhelmed and destroyed.  The Mamelon is now back in Russian hands.

The two remaining French regiments, which includes the battered Algerians, rally and once more charge up against the defences. 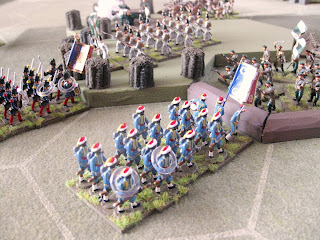 They are met with a hail of musket balls and canister from the guns up on the Malakoff. The French attack fails and the remnants of six battalions limp back to the French lines: 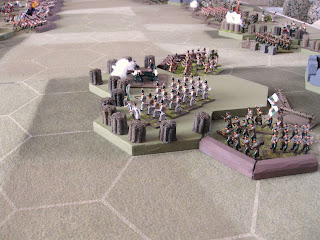 As night falls the allied commanders confer and decide to try again in the morning. Once again the allies throw a strong 9 for resupply. During darkness they will bring up fresh troops for the morning assault and have sufficient to replenish the guns. The Russians again are not so lucky, throwing just two. They decide to use all their points to resupply the guns on the Mamelon and Malakoff defences.
Posted by Bob The Old Painter at 11:00