Day 6 Siege of Sevastopol - Action before the Redan

Having agreed that the British should begin operations against the Redan, during the night the guns are resupplied and orders given for a major bombardment of the forward Russian defences forward of the Redan. The aim is to target the infantry to weaken them prior to the assault.

With preparations in place a roll for weather is made and a score of ONE means that days of sunny weather end as fog has come down during the early morning, masking the guns and and delaying the bombardment. A roll of the D10 sees the fog clearing after six hours, around 2pm.  This has seriously disrupted the British plans for the day.

However, the British use the cover of the fog to move some skirmishers from the Rifle Brigade forward. As the fog lifts the crackle of musketry breaks the silence, followed by the roar of the guns.

The British riflemen engage in a brisk firefight with the Russians behind the defences, with minimal success. The Russians return fire and some of the Greenjackets begin to fall: 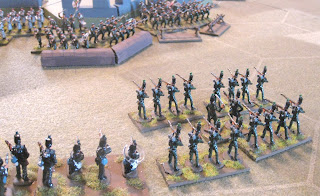 The next turn is better for the British, with sufficient action points most of the guns open fire, including the heavy mortars: 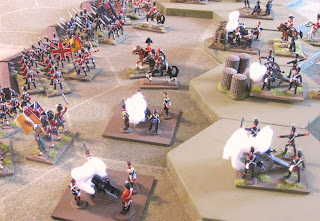 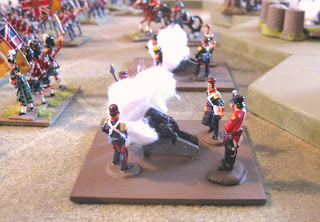 The combined heavy artillery and rifle fire causes one of the Russian regiments serious casualties and next turn, further casualties force it to rout off the field.

In a counter move the Russians deploy a Jaeger regiment which begins pouring fire into the left hand rifle battalion, causing heavy casualties and forcing it to retreat: 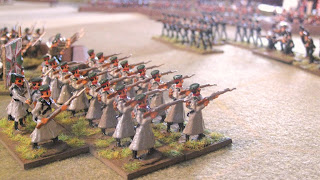 As dusk nears the exchange of fire continues, but the British casualties mount and soon the second Rifle battalion is forced off the field.  With visibility reduced the firing stops and both sides assess the damage. There is no clear winner, although British casualties are higher, at around 300, and so the Russians probably came off on top.