Political Games
Given that two attempts to take the Mamelon have failed and this is at the cost of getting on for 5000 French troops, I thought it might be interesting to include a bit of political intrigue at this juncture. I think the most important aspects are the political reactions in capitals and the political relations between the two key allies; France and Britain. I am not considering the Russians at the moment, but may do later.

I have devised a simple series of charts with a column for each nation. Rolling a D6 at each stage. The first part tests the national mood, ranging from great concern at the bottom and need more of the same at the top (satisfied). Once the national mood is established there are two charts. If the mood is bad then the political message demands more actions on a sliding scale. On the other-hand if the mood is good then encouraging noises are made by the politicians. I am assuming that political advisors are present in the Crimea and they receive higher level advice via telegraph from London and Paris (with a time delay).

At this point I tried the test and both the French and the British rolled D6 for mood. In both cases the politicians are content at the moment. In the case of the British the direction was 'Continue as you are and await the outcome of the French assaults before ordering any British actions'. The French orders were to 'Continue attacks against the Mamelon', and with previous direction: if successful it is essential France gains the credit, avoid seeking British support unless absolutely essential, on no account should British troops enter the Mamelon before the French'. And now - 'France may support British requests for support'.

So for today, it is business as usual!

The 3rd French Assault
This time the French decided that a dawn silent approach should be tried in an attempt to get as close to the ramparts before the Russians are alerted. Four allied regiments climb out of the the forward trenches: 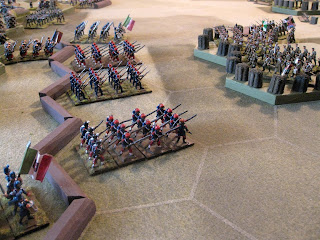 Unfortunately for the French the Russians are not dozing and the resupplied guns begin pouring shot and shell into the advancing columns. The left hand Sardinian regiment is particularly exposed and loses hundreds of casualties to the guns on the main ramparts: 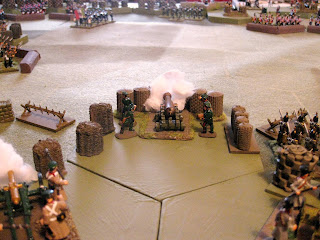 However, the battered Sardinians, the Turks and French manage to reach the walls of the Mamelon and fight the defenders: 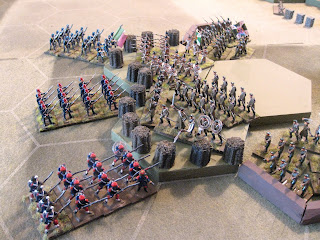 This time the attackers are in sufficient numbers to push back the Russians and one of the Russian regiments is pushed aside, the Turks break into the Mamelon; however, the weakened Sardinians collapse and rout to the rear, and the French are also forced back: 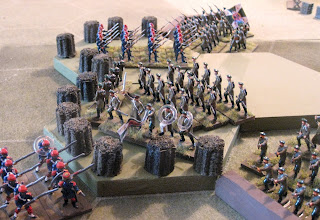 The Turkish hold on the Mamelon is short lived as they are driven out once more. This attack is beginning to go like the previous assaults, with each successful attack being pushed out. However, this time the allies rally and once more assault the walls. 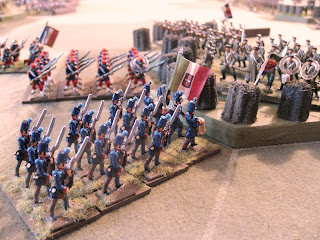 Another Russian unit collapses and suddenly the second Sardinian regiment is in the Mamelon: 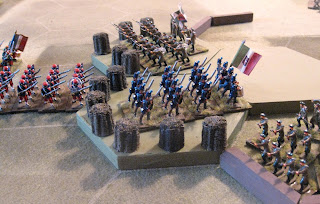 With a French unit assaulting in support the remaining Russians on the Mamelon feature are also forced out with heavy casualties. The Allies are now in control of the Mamelon: 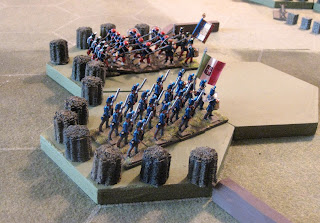 The last Russian defenders are swept aside as the Allies celebrate on the heights, quickly bringing forward additional troops and engineers.  The Russians do not have sufficient troops to counter attack and the day ends with a brief exchange of artillery fire.

During the night the French fortify the Mamelon to thwart a counter attack expected at dawn: 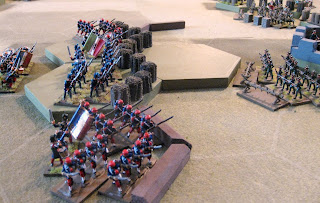 The Allies celebrate and with a roll of 4 bring up more troops into the French sector, mostly Sardinians.  The toll for the days action is 726 allied casualties and some 2640 Russians, most of which were caused as they collapsed inside the defences.

That night the Russians, who roll a seven, rearm their artillery and bring in three fresh regiments into the area of the Malakoff.