Alan, from ABC Wargamers, very kindly gave me two Victorian era warships.  One of these is a Dapper Class gunboat, which I have named HMS Grinder.

A number of scenarios came to mind, however, I thought this fictitious battle would be fun.

The setting is the Crimea 1855 and an old Ottoman watchtower has been occupied and fortified by the Russians. Several heavy guns have been installed, protected by infantry.  These guns have been harassing allied shipping moving along the coast. So, it is decided that an amphibious force, protected by HMS Grinder will assault the guns from the sea.  The troops will off load from transports and row ashore during darkness, to land at dawn. It is hoped that the Russians can be taken by surprise.

For three turns the British force is undetected, however, on turn three, 32lb shells begin to fall in the sea around the British. Here HMS Grinder covers the landing: 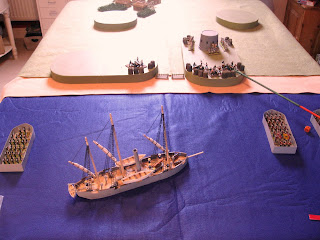 The British landing force consists of three battalions; on the right the 20th and 68th foot and on the left the 2nd Rifle Brigade. 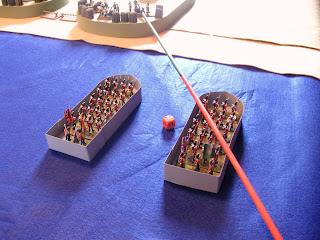 HMS Grinder brings her guns to bear on the Russian batteries: 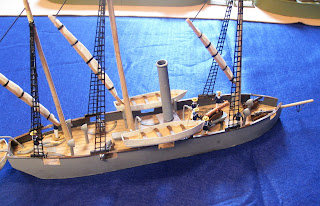 The Russian batteries, now fully alert, blast away at the British boats and Grinder takes a few hits: 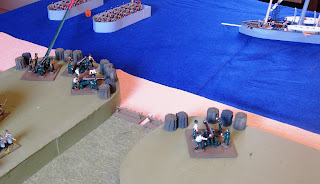 The sound of the firing alerts the Russian garrison in a nearby village and they prepare to march towards the firing: 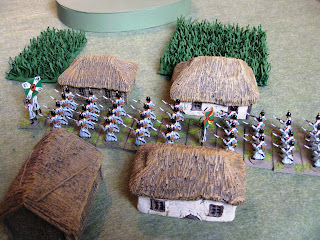 For the Rifle Brigade things go much better and they approach the beach without drawing any enemy fire: 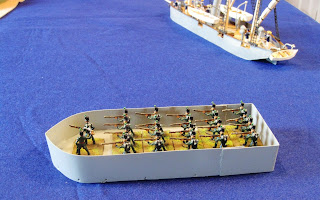 After taking a few casualties the 20th and 68th hit the beach and form up: 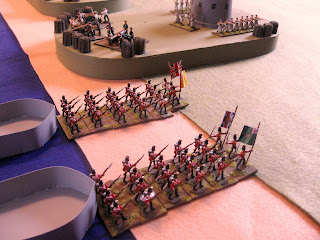 The Russian Garrison pours down volleys of fairly non effective musket fire as the British infantry begin to assault: 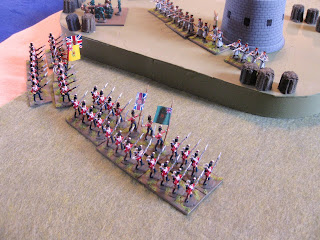 The Rifle Brigade has also landed and has quickly gained the top of the cliffs to attack the Russian right hand battery: 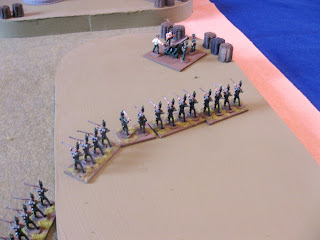 The Green Jackets quickly deal with the Russian gunners, but can see two columns of Russian infantry coming up from the village: 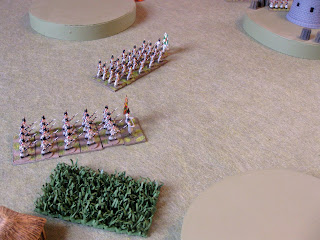 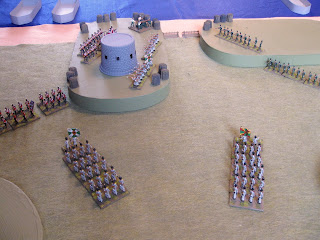 As the Russians approach, the 20th storm the Ottoman watch tower and push out the garrison, while the 68th form line and devastate one of the advancing columns with Minie Rifle fire. Soon the plain behind the batteries is full of routing Russians: 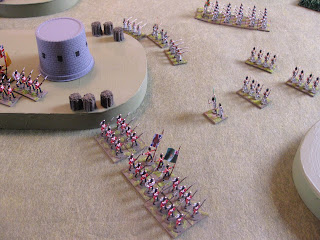 However, during this time HMS Grinder has been in a bitter firefight with the remaining Russian guns and has suffered badly and is forced to withdraw: 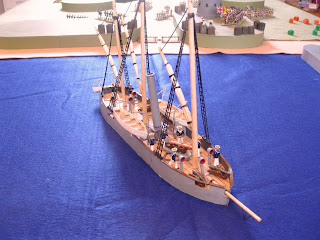 This is bad news as Grinder will be important in providing covering fire as the raiding force withdraws.

There is more bad news for the British, one of two Cossack regiments that had been on a dawn patrol has galloped to the sound of the guns and turns up on the Rifle brigade's left: 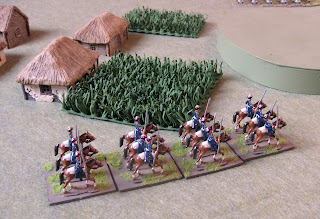 At last the 20th clear out the remaining Russian gunners and now engineers can begin to destroy the batteries: 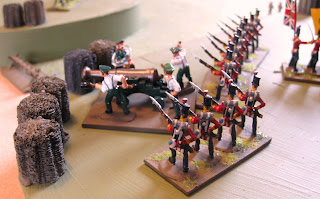 However, more bad news. As the British gain full control of the Russian position a second Cossack regiment appears on the British right: 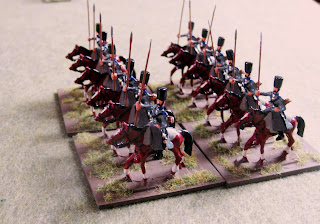 Seeing the arrival of the Russian cavalry those Russian units that routed rally and join the advance: 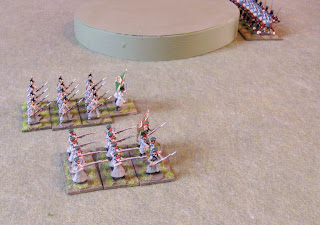 On the British left, the Rifle Brigade form line to face a cavalry regiment and Russian grenadiers: 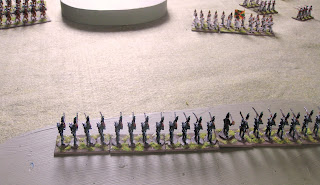 The cavalry charge forwards, but are cut down by rifle fire, but the British take some casualties from the Russian grenadiers: 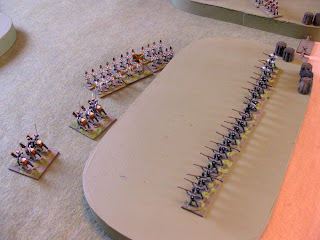 The Russian grenadiers advance and a firefight ensues, and although many riflemen are cut down, the Russian column is destroyed before it can make contact with the Rifle Brigade. The British left flank is secured: 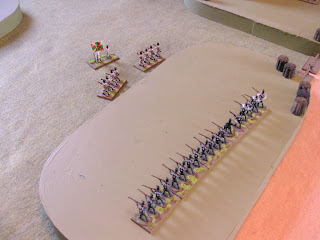 On the British right, the second Cossack regiment sits just out of effective range to await more Russian infantry: 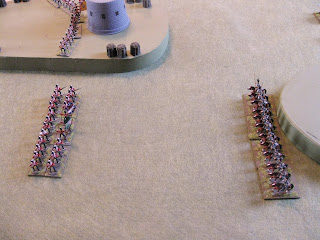 The British engineers have now completed their task of destroying the Russian guns and, escorted by the 20th, they set off back to the boats: 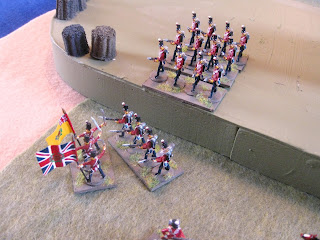 Seeing the British withdrawing and with Russian infantry close to the tower, the Cossacks attack: 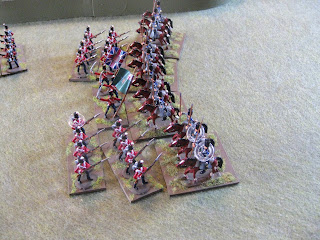 This time it does not go so well for the British, who fire a volley at the charging cavalry, but only with limited effect. The 68th are pushed back and a bitter melee takes place. The 20th form up behind the 68th to lend support, but also need to start boarding their boats before the Russian infantry come into range: 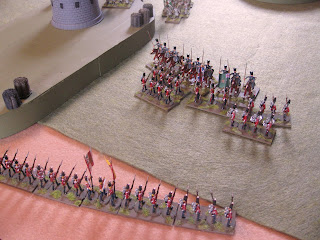 The Cossacks are forced back in the next turn, but they reform and charge again: 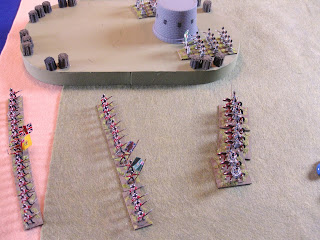 This time they are met by a devastating volley and the Cossacks are shattered: 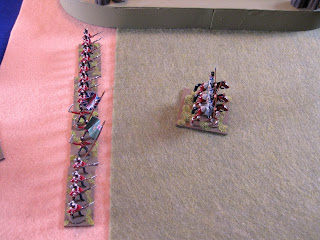 By now the Rifle Brigade have manged to board their boats and row off back towards the awaiting transports: 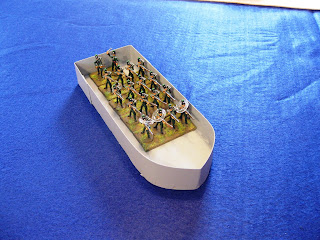 The 20th too are now boarding as the 68th pull back to the beach: 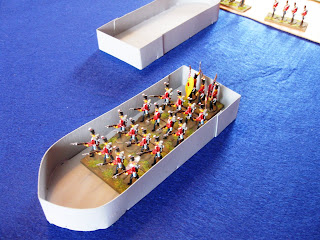 On their own the 68th attempt to board their boats, but come under sustained fire from the Russians and suffer many casualties; 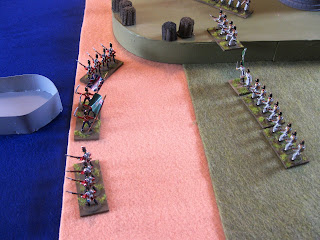 The commander of the 68th orders the colours to be saved, but it is hopeless, trapped on the beach, with increasing numbers of Russians firing from above and from the front. The remnants of the 68th surrender.

The battle ends. A successful but costly operation for the British, having had a warship badly damaged and losing over a third of the force.

I used my own homegrown rules for this game, which proved to be a fast paced little action.