A Commotion Within the Shire

Now Cuthbert is a bad man, he and previous generations of his family, through theft, violence, forced marriage and swindles, have gained vast areas of the shire amassing huge wealth. However, Cuthbert was invited by the King to partake in the war in France, where he and other nobles formed a contingent of the English army.  While Cuthbert was away at war, his main rival and neighbour, Rupert, decided to move. After a few skirmishes much of the land taken by Cuthbert is recovered. However; Cuthbert soon learns of these developments and gains leave from the King to return to England.

On arrival at the shire Cuthbert is greeted by a small army consisting of aggrieved nobles and hired knights blocking his path along a low ridge.  Cuthbert deploys his men and the two forces prepare for battle. His forces are at the bottom of the table. 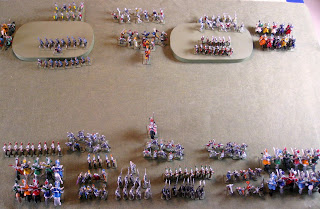 Both sides have a mixture of foot and mounted knights and men at arms, archers, Rupert also has some crossbows. Looking along Cuthbert's right flank: 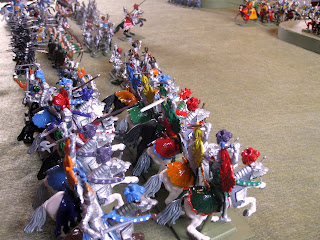 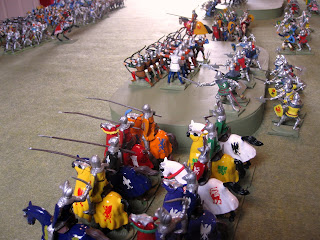 The two leaders ride out to confer and decide on how the battle should be fought, but this soon breaks down into loud cursing and swearing: 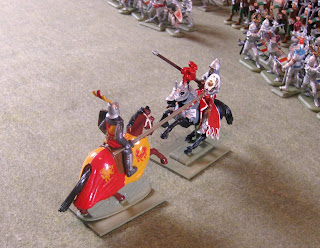 The leaders return to their lines and Cuthbert orders his archers to deploy forwards: 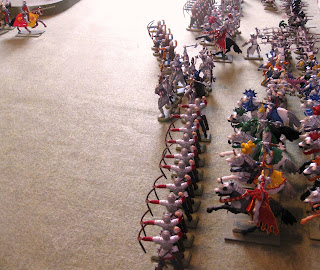 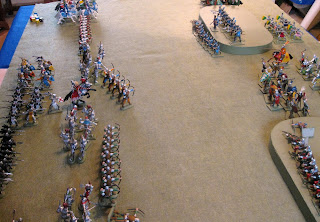 There follows an exchange of fire and both sides take some casualties amongst their archers and crossbow men. 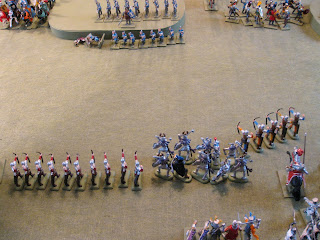 After a few volleys of bolts and arrows Cuthbert's cavalry move forwards on both flanks, feeling confident as they outnumber Rupert's mounted knights, the two sides clash: 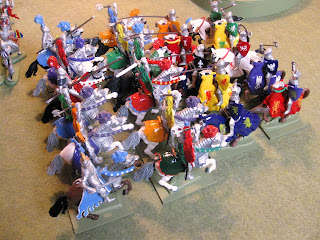 A cavalry melee develops on both flanks and Rupert's men take more casualties, here is the other flank: 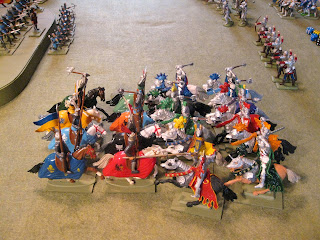 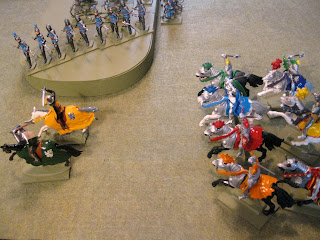 As this is going on, the archers continue to fire and Cuthbert orders some of his foot soldiers to advance to take the high ground: 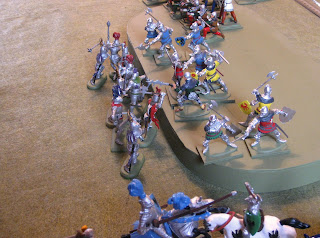 A bitter struggle ensues and initially Rupert has the edge, but more of Cuthbert's men join the fray: 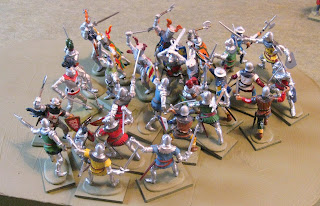 Over on his right flank, seeing his cavalry turn tail, Rupert deploys some pikemen to deter the cavalry from turning his flank: 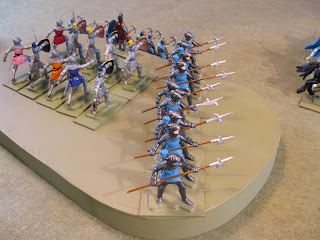 Only just in time as Cuthbert's knights storm up the slopes: 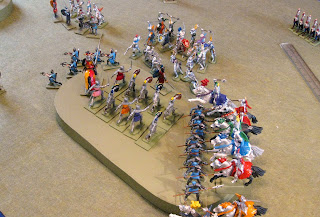 but, the horses are blown, and take many casualties fighting a wall of pikes uphill.

Cuthbert orders more of his infantry forwards and  a series of melees occur across the field; the crossbowmen are badly beaten and flee. 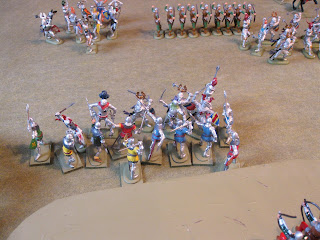 Then, Rupert's cavalry on his left flank break and this allows Cuthbert's knights to swing around the flank; 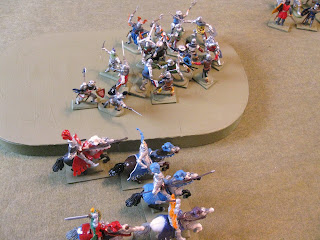 The mounted men sweep away Rupert's archers and in behind his lines: 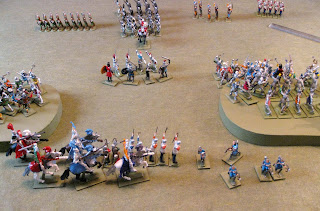 At the same time riding at the head of his reserves, supported by his archers Cuthbert moves into the centre. Rupert decides that the day is lost and he and his knights flee the field. There will be terrible retribution at the hand of Cuthbert!

All figures are 1/32 scale. Cuthbert's troops are Britains Deetail, while Rupert commands a mix of herald, Revell, Italeri, Timpo and Accurate figures.  I borrowed the fast play rules from the internet, adding some morale and fire factors.