During the summer of 1855 HMS Grinder and nine other gunboats (Beagle, Boxer, Cracker, Curlew, Fancy, Jasper, Vesuvius, Swallow and Wrangler ) were employed destroying fisheries and corn stores, as well as ammunition stores, around the Sea of Azov. Their raids forced the Russian land forces to maintain a state of constant readiness lest there be a landing.  Raids on Russian food and ammunition stores were also carried out to prevent supplies reaching the Russian troops in the Crimea.

The British naval squadron, including Grinder, was active on 23 September 1855 at the entrance to the Sea of Azov in destroying communications between Temryuk and Taman, an area of shallow seas, swamps and bridges.

For some of this summer period, Grinder, under the command of Lieutenant Francis Trevor Hamilton, served as a tender to the first rate Royal Albert, flagship of Rear Admiral Sir Edmund Lyons, Bart GCB. From July 1855 Grinder was commanded by Lieutenant Burgoyne. She played her small part in the actions against the fort at the head of Dnieper Bay as part in a joint force of British and French warships, including the steam frigate Valourous, Gladiator and Clinker, on 18 October 1855.

Further activities of the squadron, including Grinder, consisted of destroying vast quantities of provisions and fuel near the town of Yeisk in the Sea of Azov on 3 November 1855, just as the weather was changing to make naval activities there impossible. The attacks were on such a broad front that even the presence of 1500 Cossacks in the area did not inconvenience the landing parties.

The Grinder chasing Russian boats in the Sea of Azov, 31 August 1855: 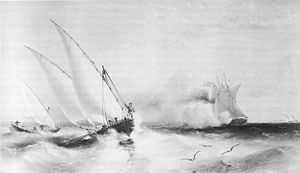 * photograph and notes from wikipedia