I have always wanted to play a game that represents one of the big WW2 battles and have had an enduring interest in OP GOODWOOD fought after D Day in 1944.  Looking on line, I found the Memoir '44 game that attempts to simulate this action. So I set about converting the M '44 map to my wargame table. I looked at 20mm figures to start with, but this just did not look right, and so I set it up using 1/300 models. This is the battlefield as laid out, the allies are on the right, Germans on the left. The central village representing the town of Cagney, Caen would be off the table at the top: 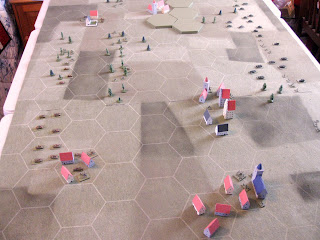 The view from the other (Caen) end: 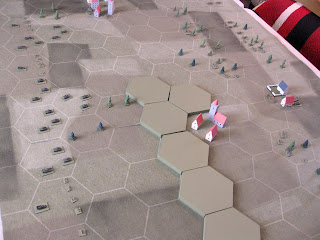 Having set it all up I began to play, but after the initial moves I felt that I just wasn't getting the feel of such a big operation. The scenario had no allied artillery in play - yet the allies deployed a huge amount, and two Corps worth of armour and infantry were represented by just  6 units of tanks and a similar number of infantry on the British side.  This means that three models represent roughly a brigade and one model a regiment/battalion. 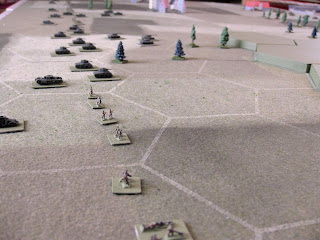 Despite the initial attraction, I just could not get into this battle. It sat on the table for several days, after which I packed it all away - maybe I was just not in the mood!