Inspired by this old print of the siege of Sevastopol, during the Crimean War, I thought I would have a go at building a similar battlefield on my hex mat and perhaps re fighting some of the action: 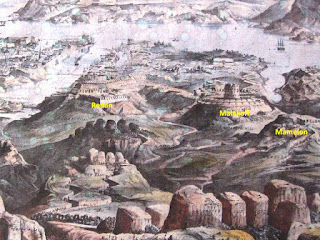 Playing around with my tiles I put together the battlefield to cover the key areas attacked by the Allies in 1855: 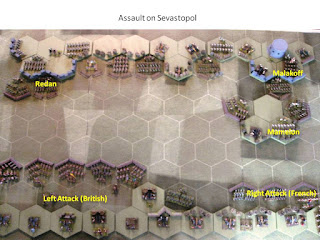 Here is some of the detail. First the area of the Mamelon, in front of the French lines: 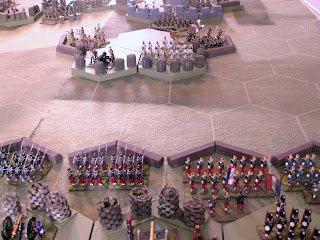 This was a fortified pimple of land that sat forward of the main city defences and was regarded as a key position by the allies as fire from here could sweep across the open terrain on both sides. The French will be responsible for the attacks in this area.

Beyond the Mamelon lies the much tougher position, known as the Malakoff, consisting of stone walls, a fortified tower and earthworks: 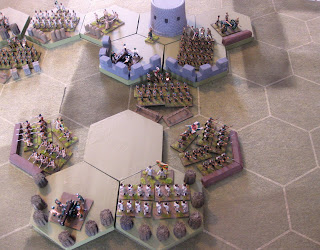 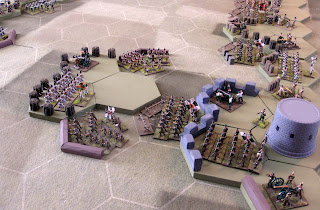 A series of earthworks running along high ground link up with the main British objective, The Redan lying at the far end: 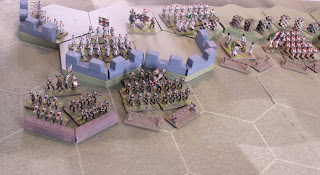 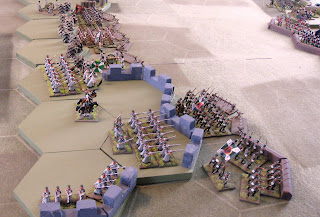 More Russian guns will be positioned in the Redan.

The Allies have assembled a mass of heavy guns that are positioned behind major earthworks on high ground opposite the city. Allied infantry are deployed across the front, protected by deep trenches: 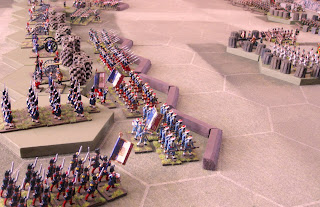 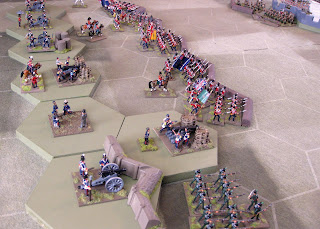 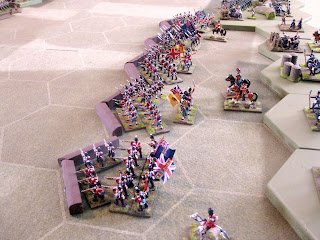 The Allies have significant reserves encamped to the rear (off the table, including Sardinian and Turkish troops, as well as the balance of French and British forces. The Russians too have reserves within the city, which is also being bombarded by Allied naval forces and other siege guns.

The Allies are preparing for their first assault.

Footnote:
I am not trying to accurately recreate the actual siege, which would require significant additional work, but I am simply drawing inspiration from the defences to create a setting for an assault against a fortress. In the real battle the Mamelon fell to the French in June 1855, while the attacks against the Malakoff and the fall of the city did not happen until September that year.