I have more-or-less decided that my WW2 wargames will be played on a hex mat using modified Memoir '44 (M 44) rules. To that end I have been slowly reorganising my model figures and rebasing them. My groupings of figures are designed to be used at various levels, so a group can be a platoon, a company or a battalion. Most often they will be used at battalion level.

I have boxes of painted loose figures that were used in the 1980s in a series of large WW2 wargame mini-campaigns, one of which included a D-Day assault on the German held Isle of Man!

I digress.  My infantry 'groups' are a cluster of 'units' and essentially consist of four rifle units, one or two machine gun units, a mortar unit, an anti-tank unit and a command unit (I use the term unit in that these 'units' are stand alone elements when it comes to using the M 44 rules),  I have drafted some additional rules that allow these 'units' to perform as such on the table - for example a machine gun unit is classed as infantry, has a strength of two figures, rolls three dice out to a range of 4 hex.

I will set out a summary of these rule additions in a future post. To illustrate here is an Airfix US infantry 'battalion' that I have just rebased, set out as above: 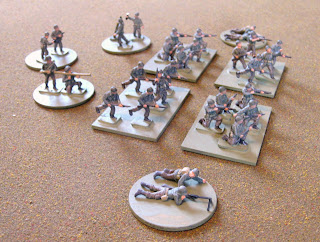 I have also rebased my Russians, and here are two Battalion groups, representing a Regiment/Brigade: 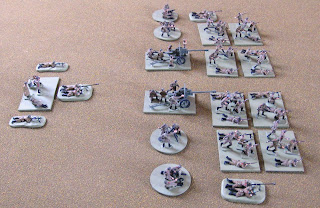 I am working on a German group, made up from old Matchbox figures. I have still to work out how to incorporate transport for my troops - for example does a machine gun armed half track become a unit? Lots of mulling over to be done!