I recently bought some buildings, a pack of 5 for about £12, and assembled them.  Also, having just painted a heap of colonial figures, I thought a small game was the order of the day.

The scenario is that an Anglo-Sudanese force has occupied a town near the River Nile.  The occupants of the town had been attacking shipping on the river and extorting  money from the boat owners. The British force had achieved its objective, occupied the town and was awaiting a boat to come and pick them up  Unfortunately the river levels had dropped and the boat was grounded several miles down stream. Meanwhile, the tribes of the River Valley had come together and had decided to attack the British in the town.  Seriously out numbered and with nowhere to go the British force must hold on until relief arrives.  The Anglo-Sudanese force consists of three companies each from the Loamshire Regiment, The McVities Highlanders and the 1st Juba Rifles. In support they have a light field gun and a gatling gun team. The force is commanded by Colonel  F R Smyth -Jones.

Here is the town with its defenders: 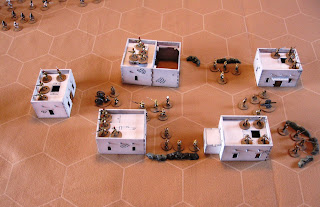 The combined River Valley tribes have the town surrounded. On a nearby jebel, amongst the rocks are some Sudanese riflemen, along with a muzzle loading cannon.  Behind the Jebel are three units of cavalry, Sudanese tribesmen and Eastern Fanatics: 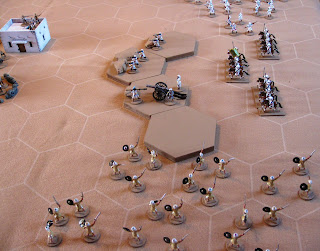 At the other end of town a large group of Hadendowah tribesmen have congregated, 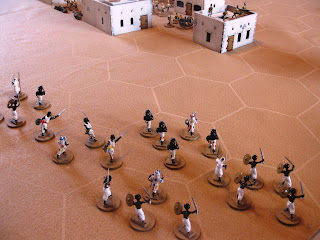 and amongst some rocks rifle armed hillmen have been sniping into the town causing some casualties amongst the Juba Regiment. 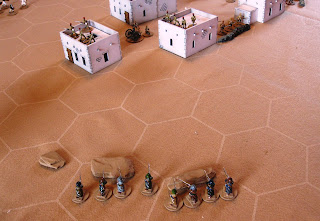 The tribesmen do not wait long before beginning their attack, as the Fanatics swing around the Jebel and charge towads the Loamshires, who fire volleys from the sangar and buildings: 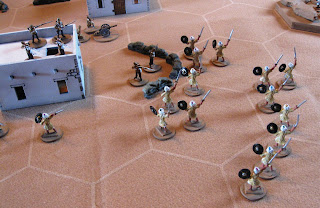 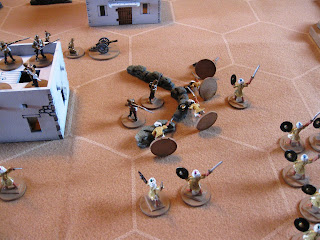 Almost simultaneously the Hadendowah charge towards the other end of the town under a hail of fire from the Juba Regiment and the Gatling gun: 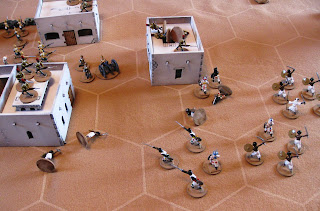 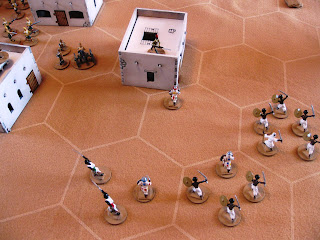 After taking many casualties the Hadendowah take one of the buildings and overun the gatling gun as well as a company of Highlanders who had mounted a counter attack, but the Hadendowah are now a spent force: 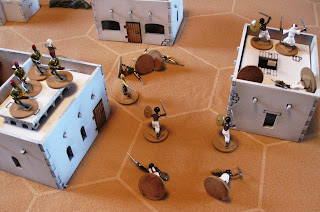 All the time artillery and rifle fire rain down from the Jebel, which gradually eliminates the light gun crew. With the British gun destroyed the Fanatics renew their attacks against the Loamshires, who are reinforced by some Highlanders. 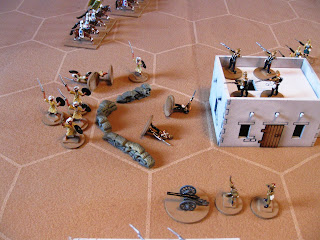 To make matters worse, the cavalry begin to sweep around the flanks and the Sudanese tribesmen begin their adavance: 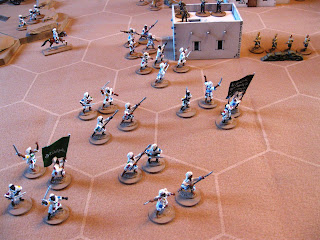 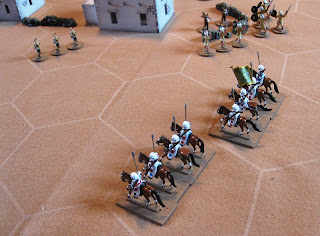 At the other end of the town the Juba Regiment continues to take casualties from the Hillmen, and skirmishes with the remaining Hadendowah, who have occupied one of the buildings.

The cavalry charge the highlanders behind the defences: 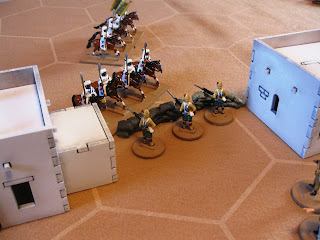 But are mown down: 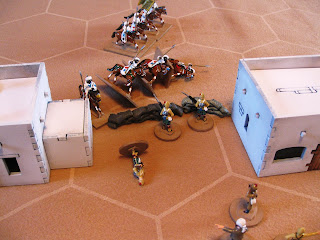 Whilst this is going on the Sudanese tribesmen storm forwards into a hail of bullets and suffer badly: 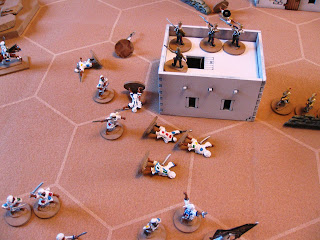 But the Fanatics finally overwhelm the other Loamshires company and take the building and a second wave of cavalry smash through the highlanders and enter the main street: 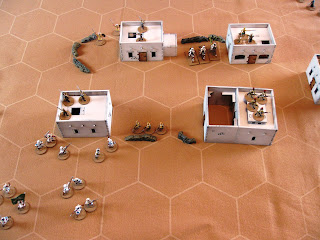 Now the remaining Loamshires company is overun and the last Highlander company is attacked by the Sudanese tribes men from the front and cavalry from the rear: 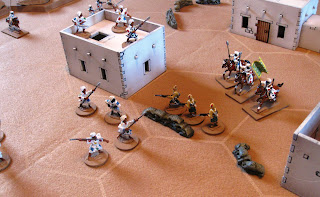 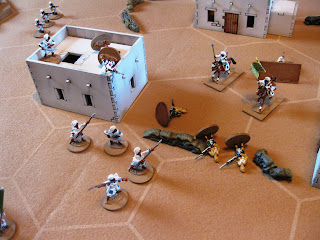 The Hillmen sweep into the other end of town, driving out the few remaining Juba Regiment, while Colonel Smyth-Jones, along with his artillery commander fall with revolvers in hand.

The battle is over and the Anglo-Sudanaese force is destroyed. The relief never arrived and the town falls back into the hands of the River Valley people.