Another wet few days, so I thought it would be fun to have a quick wargame. I decided to base the action upon Neil Thomas's example battle of the same name in his book 'Napoleonic Wargaming'.  This game has eight units per side.

I used my Warrior troops for this action, which include some very senior figures.  Two of the cavalry units were previously owned by the late Stuart Asquith and can be seen in action in December 2016 on Keith's Wargames Blog under the command of Stuart himself! 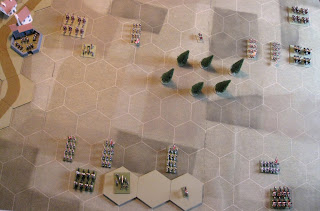 The French are at the bottom of the picture.  The town of Leibnitz is on the left, occupied by Russian Jaegers. In the centre right is the Schiller Forest and below that is Mount Hegal, around which is positioned the French army.

The Russian plan was to pin the French between Leibnitz and the Forest and bring their cavalry and heavy infantry around the opposite flank.  The French meanwhile decided to bypass Leibnitz town and batter their way through the gap between the forest and the town.

The battle kicked off with the French adavancing on the left and pulling back on the right. 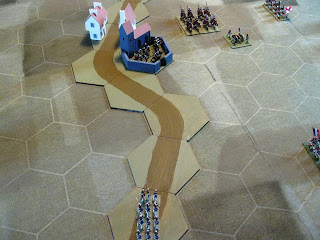 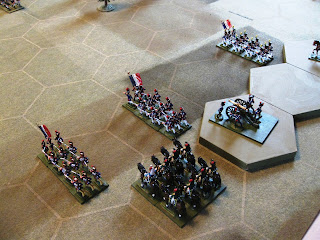 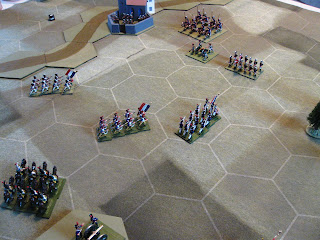 However, the Russian Cossacks charge and force the French Guard Battalion into a square: 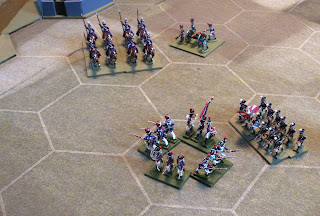 The French guard are then hit by artillery fire and finally destroyed by assaulting Russian infantry - not a good start for the French.

On the opposite flank the Russians begin their move, with two infantry battalions (one Guard) and two cavalry regiments, one heavy. 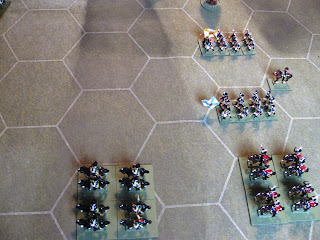 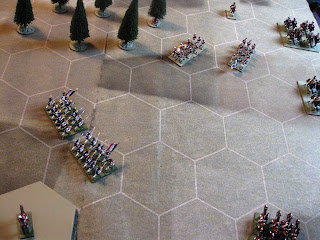 Back on the other flank things begin to hot up. The French send in their dragoons to chase off the Cossacks and a line grenadier battalion charges the the Russian line battalion that was already damaged during the fight with the guard. The Russian infantry is destroyed: 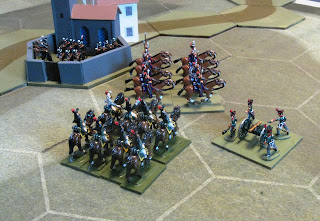 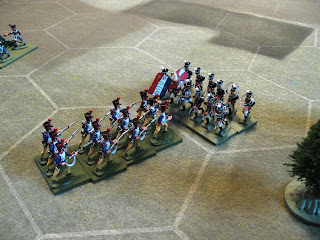 Having defeated the Russian line infantry the French storm into the Russian gunners nearby and wipe them out too: 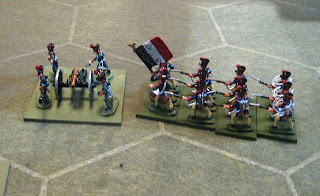 The French are much happier now, having seen off the Cossacks and destroyed  an infantry battalion and a gun.

On the other flank, things are also developing.  The French Chasseurs a Cheval attempt to fight off the Russian Cuirassiers, fail and then rout from the field leaving the French flank horribly exposed.  However, not waiting for support, the Russian guards storm into the French voltigeur battalion, causing some casualties and forcing them back.  This leaves the guards flank exposed and next turn they suffer heavy casualties from flank and frontal fire and rout off the field: 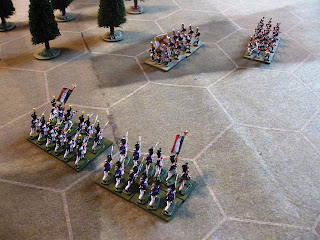 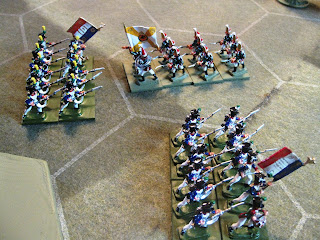 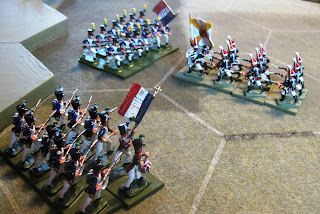 The French success is quickly forgotten as the two isolated units are threatened by cavalry and forced into square, whereupon they begin to take casualties from the Russian grenadier battalion that has moved into range: 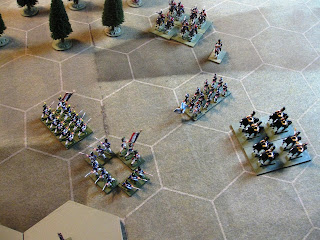 The French dragoons now hurtle across to the threatened flank and begin a lengthy melee with the Russian Hussars, with neither side making much headway. 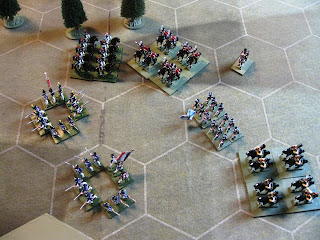 Having seen the French dragoons depart the Russian Cossacks come into play once more and charge the now exposed French Grenadiers, who fail to form square and are destroyed: 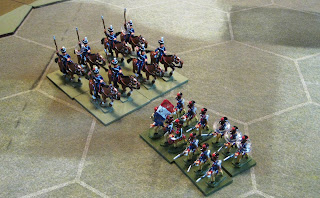 During the same turn the Russian Jaegers emerge from Leibnitz to threaten the French left, supported by the Cossacks: 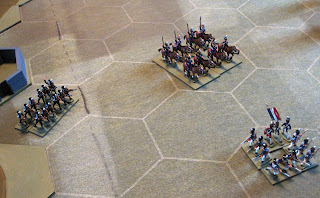 Back on the right flank, one of the French squares collapses and routs from the field. This leaves the French gun exposed to attack by the Russian Cuirassiers, and despite heavy casualties the guns are swept aside. This final blow sealed the fate of the French, giving a 5-4 victory to the Russians. 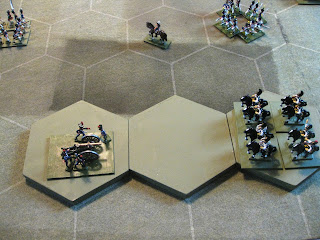 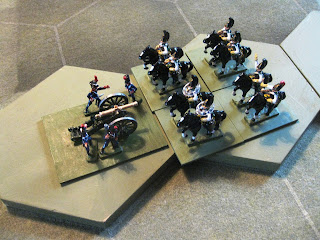 What a great game.  Sometimes it is the simple games that offer the most enjoyment.