This action is set in the late 60s, early 70s, with the British Army on the Rhine reacting to a surprise attack mounted by Soviet forces. The covering force did not have time to fully deploy and Soviet armoured formations have made thrusts through the british defences. A line has been hastily drawn along a river and sappers are preparing to blow the bridges.

One such bridge is the steel structure just outside the village of Kreuzdorf; which is being defended by an understrength battle group, of four infantry companies from the Loamshires, two tank squadrons from the Hussars and a Territorial Army armoured car squadron from the Yeomanry. There is also an artillery observation team, but there are no guns in direct support. Artillery will have to be requested when needed. The Battlegroup has a mortar platoon and battlegroup HQ.

Soviet forces are estimated to be a Tank Regiment group, with supporting infantry and artillery, as well as strong recce forces.

Here is an overview of the battlefield from the british positions: 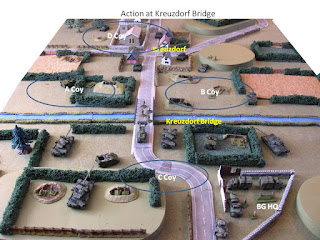 It can be seen that the Yeomanry with D Company are in the village itself to provide warning and delay; 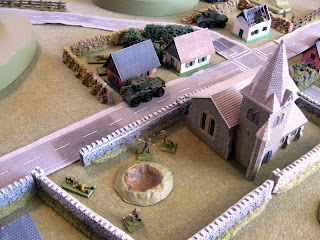 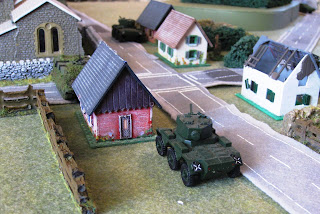 while A and B Companies are dug in on the far bank of the river. 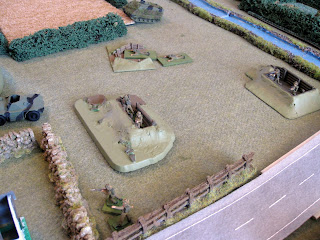 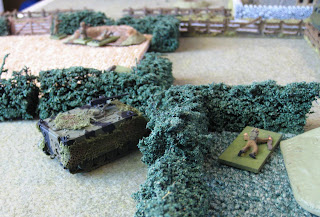 The tanks, C Compant and BG HQ are on the home bank. 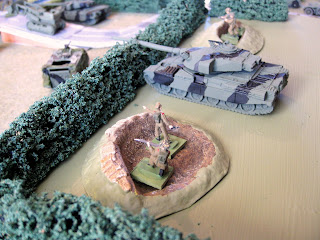 Engineers are preparing the Bridge for demolition. 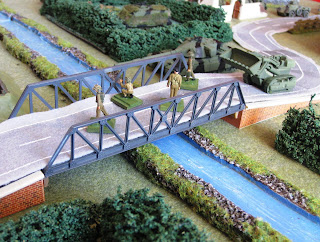 Almost as soon as the Battle group takes up its positions the leading Soviet reconnaissance elements can be seen approaching the village from two directions: 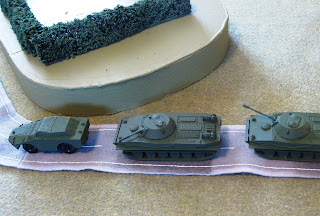 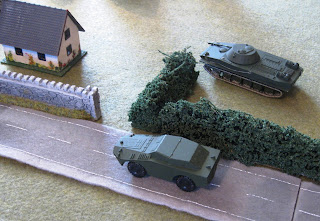