The British plan is to delay any enemy advance by defending Kreuzdorf village until it becomes untenable and then withdraw D Company and the Yeomanry Saladins back behind A and B Companies, that form the main defensive position.

All goes well to begin with. As the Soviet recce vehicles approach the village they come under heavy fire from the British armoured cars. A lucky hit knocks out a PT-76 light tank and as a BRDM-1 scout car runs for cover, it too is taken out. The Soviet probe around the church is destroyed. 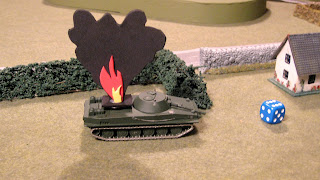 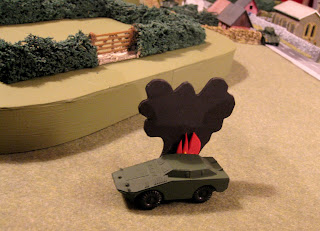 The Saladins have less luck on the eastern route, failing to damage any enemy vehicles.

The Soviets are alerted as the recce troops radio back the presence of the British in Kreuzdorf. The Soviet commander moves up and takes a position of observation on the hill outside the village. He also brings up a 120mm mortae team and SPG-9 recoiless anti-tank guns: 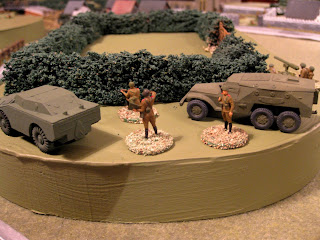 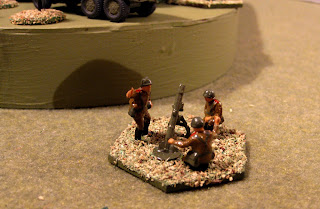 The exchange of fire between the Saladins and the PT-76s continues, with the Yemanry losing one vehicle: 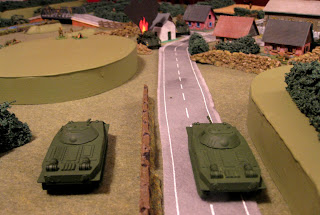 On the next turn the British Artillery observer requests a fire mission, but is turned down as all guns are busy. The Soviet commander however, uses his 120mm Mortars to good effect on the village. This stonk takes out the HQ of D Company and a couple of riflemen. The PT-76s destroy another Saladin: 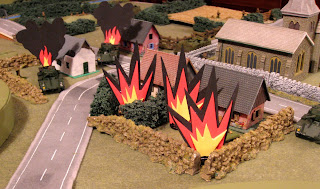 The British are losing the battle for the village, and the order is given to D Company and the Yemanry to pull back. The British Commander wonders whether he should have deployed some of his Cheiftains forward. As he ponders the sound of battle tanks can be heard beyond the village as a company of Soviet tanks appears: 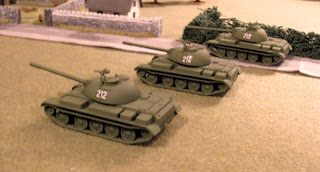 The Saladins pull back, but one is taken out by a Soviet tank: 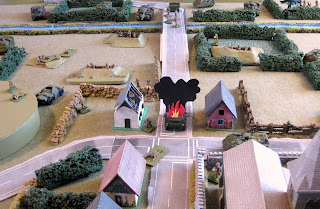 Only one Saladin remains and it scoots back towards A Company: 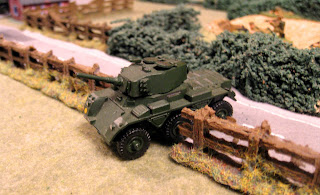 At last the British artillery observer is allocated some guns and he brings down fire that smashes into the Soviet HQ, killing the commander and a rifleman: 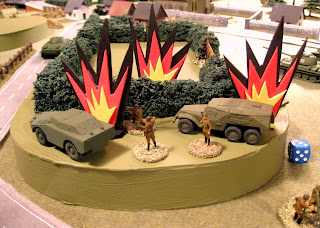 However, more Soviet tanks rumble onto the field: 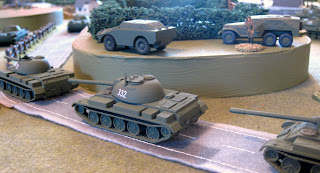 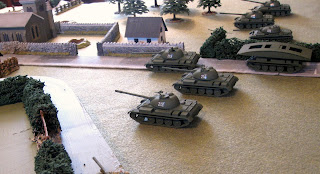 The remnants of D Company fight their way out of the village: 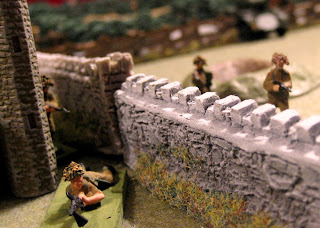 Not such a good morning for the British, although they have blunted the enemy recce and disrupted the Soviet command and control - for the time being.