The time has come and finally the troops are ready for this battle. Over the last few days I have been putting together the terrain and will refight my version of the battle during the coming week.

Here is the battlefield, looking from the South, set out on a 6 x 4 ft table: 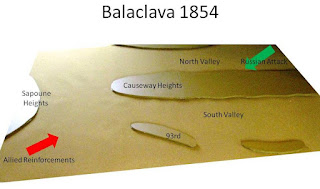 It's a bit tight but the main features are there. The battle will begin at dawn with the Russian assault on the Causeway Heights. Victory will be allocated to the side in possession of the heights at the close of the battle. While the rules will be those used in the two previous battles I want to reflect the circumstances of the real engagement. I think there are several factors that need to be included:

1. The confusion of the 1st Division reinforcements, which marched and counter marched all morning due to several earlier false alarms.

2, The uncertainty within the cavalry Division, given that the commanders on the ground could not see what was visible to the high command up on the Sapoune Heights (compounded by the hatred between the Cavalry commander (Lord Lucan) and the commander of the Light Brigade Lord Cardigan).

3. The willingness of the Russian cavalry to take on the British which led to moments of hesitation.

The alarm has gone out and the British troops are taking to the field as the Russians close in on the Turkish positions on the Causeway Heights.
Posted by Bob The Old Painter at 04:57