As mentioned in my previous post the Marines fire a devastating volley into the Caucasian Cossacks, who break and gallop off to the rear: 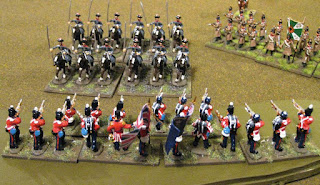 However, almost immediately the Marines are peppered with musket balls and shot and a column of Russian infantry charge into them. Despite fighting fiercely they are forced off the ridge and withdraw to the inner defences of Balaclava. This exposes the British redoubt, which is also stormed by the Russians and crushed.

Having beaten off the cavalry the Turkish Battalion is ripped into by a musket volley followed by a bayonet charge. The Turks crumble and run to the rear.

This leaves only the 93rd, who are now suffering casualties from Russian jagers and two regiments of infantry. They fire a volley into one of the Russian regiments, which halts and reties. However, the pressure is too great and their flank is threatened by more infantry. Sir Colin Campbell takes a musket ball in the arm and falls from his horse. The 93rd pulls back from the ridge pursued by the Russians: 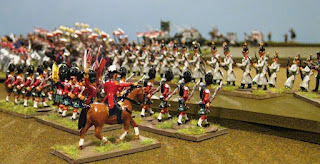 In the centre Lucan looks on in horror as the Inniskillings and they Greys are sucked into the massive cavalry melee. His staff urge him to send reinforcements, but on testing he refuses. (He can see the headlines in London "Lucan loses the Heavy Brigade". At the moment he can blame Raglan, who ordered them to support Campbell. 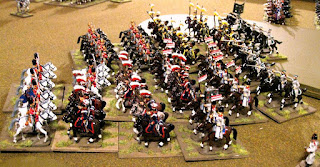 A few minutes later a message arrives from Raglan ordering him to attack the enemy cavalry on the Causeway Heights. Lucan canters over to Lord Cardigan and he instructs Cardigan to carry Raglan's order. Cardigan protests pointing to the massed enemy cavalry in the North Valley. After a serious argument, Cardigan wheels his horse and gallops back to the Light Brigade. He orders the 8th and 11th Hussars to attack the enemy cavalry up on the ridge, while instructing the 17th Lancers and 4th Light Dragoons to cover the North Valley. Surprisingly, in the face of overwhelming odds he splits his Brigade.

Pleased to see some action the two British hussar regiments wheel towards the Causeway Heights:

It is now past midday the bulk of the British cavalry are committed, the Russians have driven off all allied forces from the outer defences of Balaclava. The Russians have achieved their strategic objective, but the allied reinforcements continue to build. This is the overview of the field: 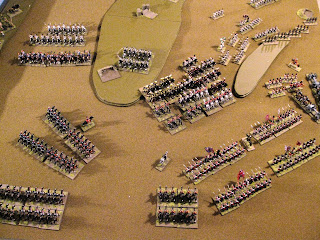