From his vantage point on the Causeway Heights the Russian Commander Liprandi looks across the South Valley with some satisfaction. His infantry have control of the area and, apart from some musketry from skirmishers, the valley is quiet once more.

To his right his cavalry have the upper hand in the brawl with the Heavy Brigade, although the fighting is intense. Further to the right he can see more British cavalry wheeling right with the apparent intent of taking his own cavalry in the flank.  Quickly identifying this new threat he issues an order to his mounted troops in the North Valley along with a Regiment of dragoons on the heights to counter the threat.

As for the British, the two regiments of hussars are now cantering up the slopes of the heights with their speed increasing. The Russian dragoons fail a charge test and the 8th Hussars slam into them pushing back the front ranks. The 11th Hussars plough into the flank of the Russian 13th Lancers, who are close to routing the Inniskillings. A second fierce cavalry action begins: 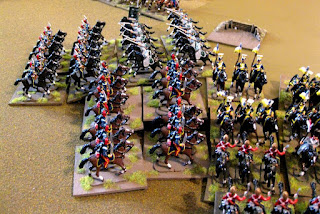 Meanwhile in the North Valley, Lord Cardigan anticipates the Russian’s next move. Unless he acts he can see more Russian cavalry turning the Hussar’s flanks. He orders the 17 Lancers and the Light Dragoons to engage the enemy cavalry to their front. The two regiments, with Cardigan at their head, trot forward and break into a gallop. To their front are three Russian regiments; the 2nd Lancers, Ingermannlandski Hussars and a unit of Don Cossacks. Battle is joined:

The Light Dragoons make short work of the Don Cossacks; however the 17th Lancers do not do as well, taking heavy casualties as they collide with the Hussars. 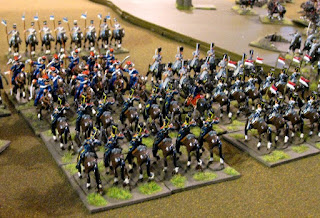 Up on the Causeway Heights, their horses blown and severely battered, the remnants of the two Heavy Brigade regiments break and retreat towards the west. Over 50% of their number are either casualties, lost their mounts or are taken prisoner. The Russian cavalry are also exhausted and seeing the scarlet ranks of the deploying 1st Division, they trot to the rear to reorganise. 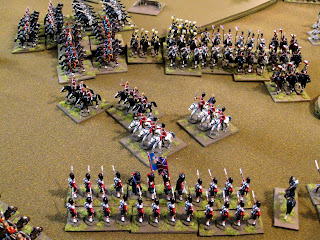 Back in the North Valley Cossacks up on the Fedioukine Hills begin to wheel left and threaten the flank of the Light Dragoons; however the French 4th Chasseurs d’ Afrique have been shadowing the action in the North Valley and they charge into the Cossacks with devastating effect. The Cossacks quickly turn tail and the French cavalry pursue them, hacking their way through a Russian artillery battery that is in their way.

On the Causeway heights the British Hussars are also successful the 11th Hussars shatter the Russian 13th Lancers, who break and gallop off to the rear. Equally successfully the 8th Hussars rout the Russian dragoons. But the action is costly as over 100 hussars are killed, wounded or dismounted. To add to their woes, the Russian 17th Lancers have reformed and charge into the flank of the 11th Hussars, causing more casualties. The battle on the heights culminates with the British hussars withdrawing back towards the allied lines, but the exhausted Russians do not follow up. To do so would bring them into range of the British infantry who are now at the mouth of the South valley. 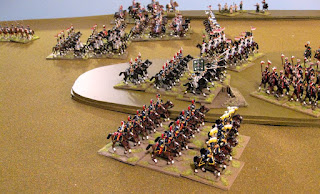 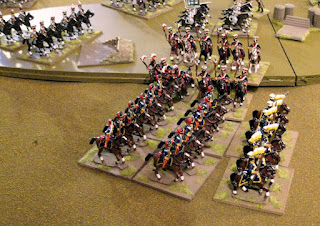 In the North Valley the British 17th Lancers break off the action and the recall is sounded for the Light Dragoons, who face another fresh Russian regiment – the 2nd Lancers.  Again the Russians do not pursue. Over to the west they can see a mass of blue uniforms as French infantry develop a defensive line below the Sapoune Ridge. The 4th Chasseurs d’ Afrique, having seen off the Cossacks and a battery of guns, trot back to their start positions.

It is late afternoon and the battle field falls silent save the chink of the cavalry as both sides ride to the rear and reorganise. In the North Valley the action breaks off too. 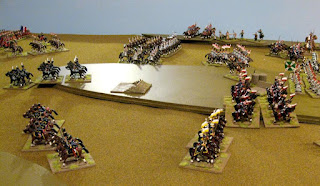