Over the years I have developed my own rules, learning from early experiences where once battle is joined it can take an hour or more per turn to resolve combat with complex charts and tables. These rules work for me and have no tables and are on one sheet of paper. They have two things which speed things up: 1; the use of coloured measuring sticks and a set of dice for each colour on the stick,numbered with higher probability for close range and lower for long range. 2; is that morale calculations are based on % casualties with a few adjustments. Everything else is much the same as other rules but greatly simplified. Here is the measuring stick for infantry in use. The British are firing on the Russians. Eight figures firing at medium range means two orange dice marked with 0,0,0,1,1,2 (see below) 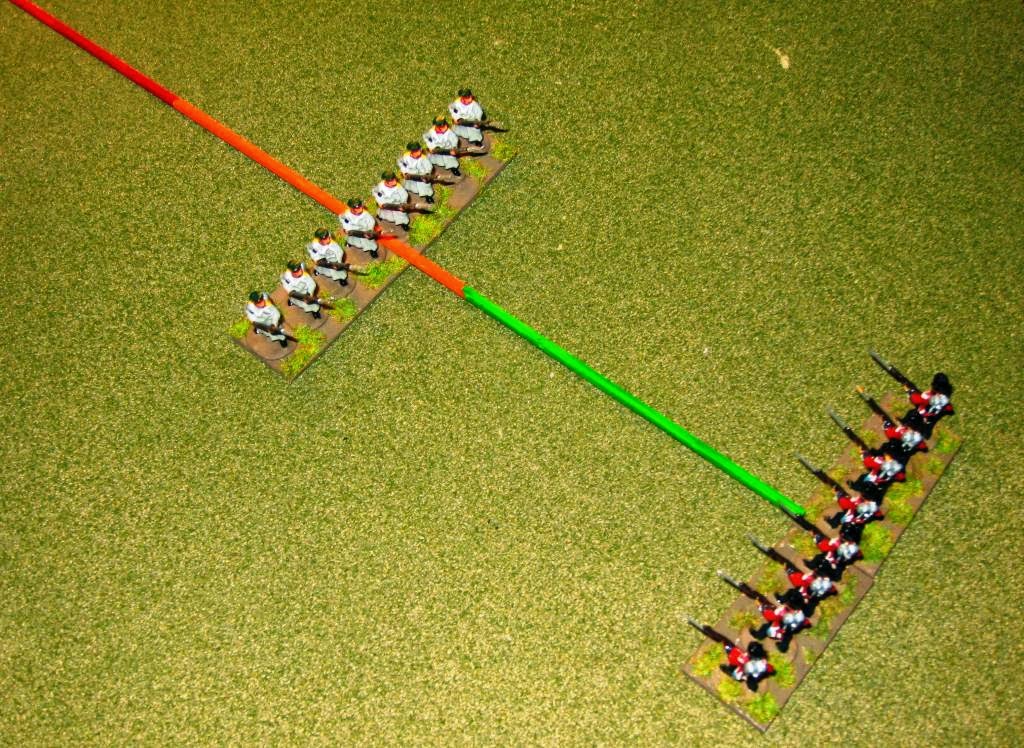 Here are the rules as set out:

Bob’s quick play Crimean rules
Rule 1 – These rules should consist of no more than one side of A4 paper.
Scale: 1 figure = 33 soldiers. 1mm = 1yard.
Equipment: small arms measuring stick (300 yds); artillery measuring stick 1000 yds
Movement
Firing:
Muskets and carbines use orange and red sections only (200 yds)
Units fire once per move, charging units are fired at half way through the charge.
Use appropriate measuring stick to work out range (short, medium, long) roll one dice for every four figures or battery firing. Total dice roll is number of figures deducted.
Dice face value- , Green = 0,1,1,2,2,3; Orange = 0,0,0,1,1,2;  Red = 0,0,0,0,1,2
Morale
Morale is based on casualties and is accumulative:
10% = Unit halts if advancing for one move, 20% = Unit pulls back half a move, 30% = Unit retires full move, 40% = unit retreats rear facing enemy, 50% = rout. (last two considered disorganized).
Adjustments
+ 10% if in hard cover, if Army commander present,if winning melee
-10% if General is killed, if under effective artillery fire, if flanking unit routs

Melee
Roll 2 ordinary dice, highest score wins deduct casualties based on one green dice for loser, red dice for winner.
Adjustments –
+1 if uphill, if charging, if elite, defending building. Russians have +1 in melee
-1 artillery in a melee, skirmishers caught by formed infantry, -2 if caught by cavalry -1 if disorganized

Special rules
British have mostly Minie rifles, Russian have high number of muskets (except jagers). Russians use column, allies line. Russians get +1 in a melee

Email ThisBlogThis!Share to TwitterShare to FacebookShare to Pinterest
Labels: Rules - My own quick game rules.