Today Bob Black paid us a visit today along with his wife. As well as having a thoroughly good chat over lunch we managed to play a short sharp wargame.  The chosen action was 1st Bull Run from the American Civil War based upon the C&C Battlecry scenario: 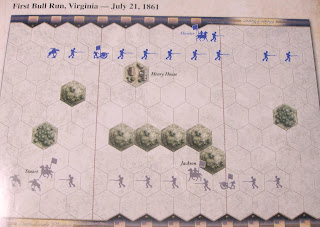 The troops were laid out as per the map.  I used my old Airfix figures on a 5" hex grid board.  Some views of the battle field, which covers the terrain from around Henry House to the ridge which was to be held by Gen 'Stonewall' Jackson: 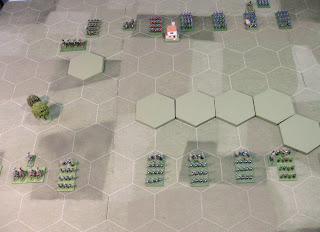 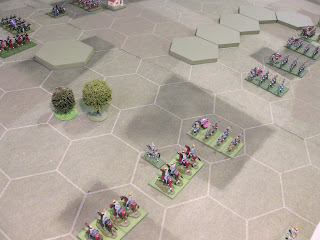 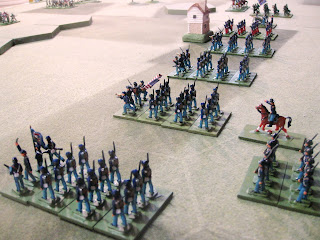 Bob took command of the Union forces and I the rebels. He began with an aggresive move against the rebel right flank with four regiments swinging around to his left 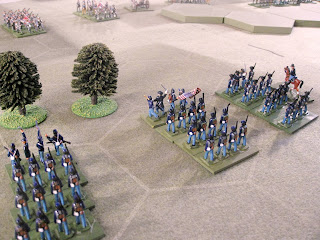 At the same time he moved two more regiments up the centre, I assumed to prevent reinforcement to the right, and he moved his Sharpshooters onto a small hill.  The Sharpshooters were quickly forced back, but the centre was now under threat too: 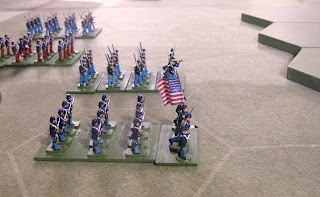 The rebels decided to hold firm and remain on the reverse slope of the ridge and countered the threat to the right flank with volleys of musket fire, also moving their artillery onto the ridge: 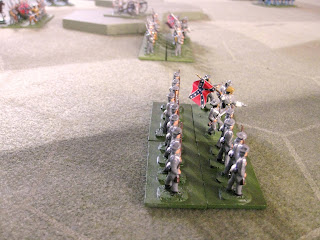 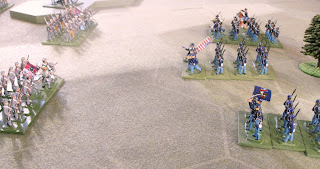 Initially the rebel fire did great damage to the union ranks, destroying one Union unit, but now in range, the Union troops began to cause significant damage to the grey ranks as one rebel unit collapsed and was destroyed.  It looked like the Union troops would sweep around the flank; however at just the right moment Jackson leads a unit and plugs the gap.  A combination of artillery and small arms fire checks the Union advance: 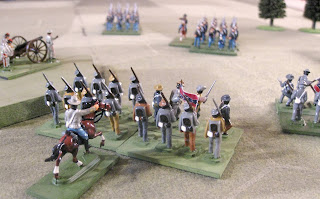 The action now shifts to the Centre as two Union units reach the crest of the ridge and are met with devastating short range volleys that quickly decimate one unit and force the other into retreat: 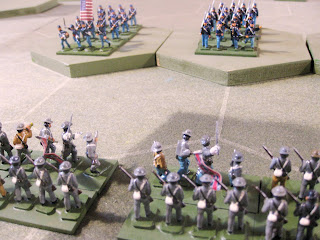 Back over on the rebel right the Union forces push forward again and another rebel regiment collapses; however, Gen Jeb Stuart rushes around to the right flank with a cavalry unit in an attempt to check the attack: 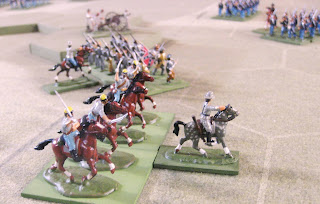 The cavalry charge into the flank of the nearest Union regiment, while artillery and musket fire hammer the other units: 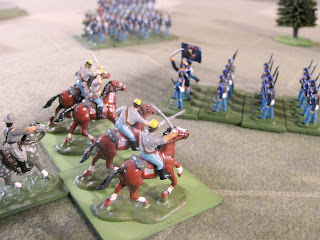 At the same time two rebel regiments advance onto the crest of the ridge and pour fire into the Union infantry below. Another Union regiment is destroyed. 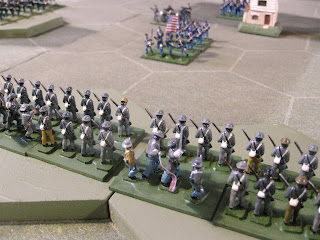 With this action and the collapse of the Union flank attack the battle is over.  The score is 6 - 2 to the rebels after a very enjoyable and hard fought action.

It was great to have a human opponent too.  I am sure Bob will be back to gain revenge!