A Parliamentary Force had been reported in northern Chilternshire, moving south attempting to cross the river Eydar intent on the capture of a Royalist town and armoury. A small Royalist force of three regiments of foot, two of horse and a gun have deployed onto the high gound of Eydar Down to block the advancing Parliamentarians. The commander of this force has been promised reinforcements as soon as they can be sent. 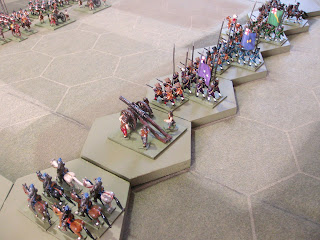 Soon the Parliamentarians arrive on the field, with five regiments of foot, four of horse and two guns. Both sides deploy their forces: 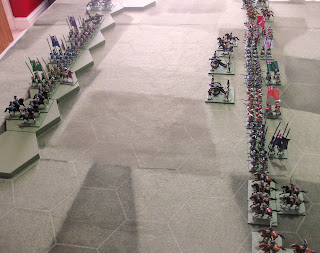 The Parliamentarians deploy their guns forward in the centre with the cavalry split between the wings. 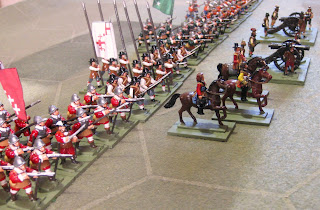 The Royalist single gun sits on their left with cavalry on both wings. The battle begins with a Parliamentry bombardment of the Royalist centre and for several turns the Blue regiment is hammered.

In an attempt to force the  Parliamentarians hand the Royalist commander orders his cavalry to take out the guns and so the two Royalist regiments of horse gallop forwards: 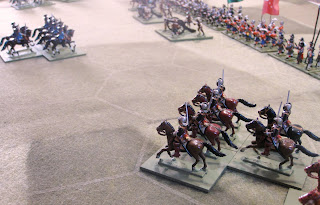 But as can be seen above this prompts the Parliamentarians to launch their cavalry.  A major cavalry battle begins in the centre, while the infantry of both sides look on. Initially the Royalsit Cuirassiers see off one of the enemy horse regiments, but on the ridge, with artillery rounds still falling amongst the Bluecoats, the infantry unit breaks:
. 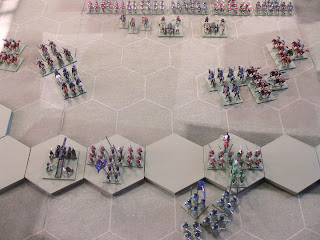 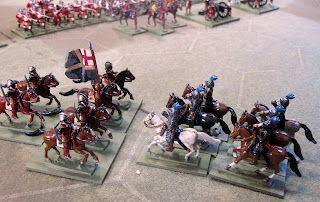 The Royalist commander hopes to delay the Parliamentarians, as each minute passing allows the much needed reinforcements to arrive; however it is clear that his cavalry will soon be overwhelmed.

Now down to just two foot regiments he attempts to bolster the morale of his men, being narrowly missed by a roundshot! 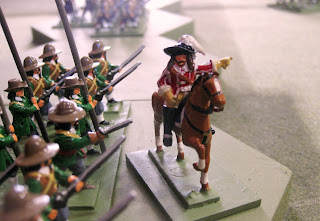 Then to his relief he hears the drums of more Royalist troops arriving in support: 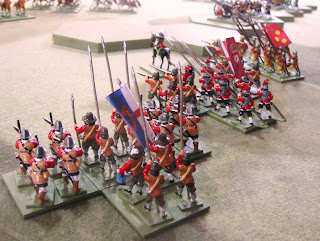 The cavalry melee continues in between the two armies, but it is clear that two against four regiments of horse will not succeed, although the Royalist cavalry regiments have destroyed the first two regiments of Parliamentarian horse, 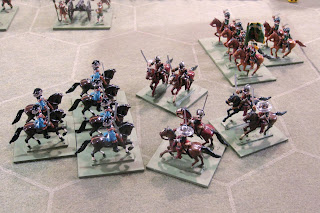 But the Cuirassiers are beaten by the second attack : 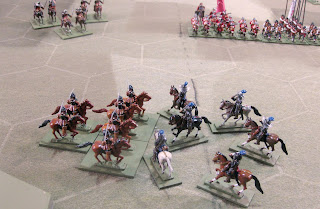 The remaining Royalist horse regiment manages to break away and forms up behind the infantry just as the Parliamentarian infantry begin their advance. Throughout the battle the Royalist gun has been totally ineffective allowing the enemy infantry to advance unmolested: 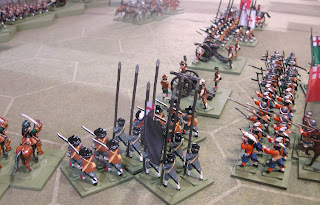 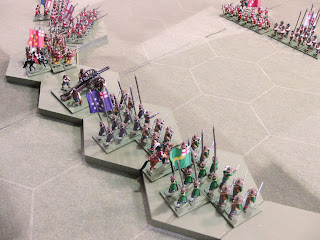 Once again the Royalist cavalry surge forwards and rout the Parliamentarian Grey Coats: 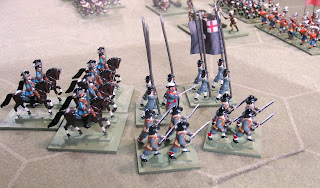 But, next turn they are attacked by two regiments of cavalry: 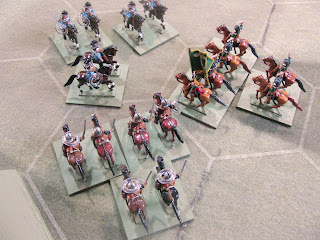 And after a heroic struggle they collapse and flee the field: 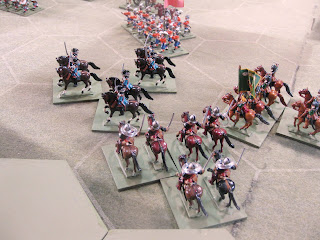 Now the infantry from both sides are closing in. 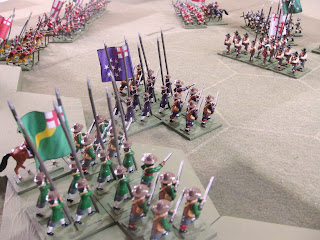 The Parliamentarian musketeers pour volleys into the Royalist line as they deploy and two regiments rout: 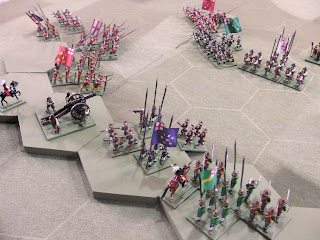 With all of the cavalry gone and most of the infantry falling back the Royalists concede defeat and begin to withdraw from the field. The  Parliamentarian army lets them go in order to rally their cavalry and continue their mission to cross the Eydar River.

For this interesting and fun battle I used the rule set from the Peter Dennis paper soldiers book, adapted for a hex mat. They worked well, although the morale rules can be devastating.

All figures are by Miniature Figurines.