Some months ago I purchased the Plastic Soldier Company (PSC) game, Battle of Britain. It was going cheap and I had often thought about a game covering air combat in 1940.  This was my opportunity.

For me, the game was spoilt by the model aircraft which were quite distorted and of a nasty green and pale grey colour soft plastic. I managed to get some new aircraft from PSC made of later hard plastic that does not bend and I set about painting them.  This took a while, but I have now completed enough aircraft to play the game.

The rules are quite complex (for me anyway) involving quite a lot of simple record keeping, using markers and charts.  It took me a while to get my head around all of the rules but there are some good videos on line that cover most of the basics.

The game is not really an air combat wargame, it is rather a strategic exercise of managing resources and getting the right combat power in place at the right time.  After a couple of false starts I began to get the hang of it.  The model aircraft are purely representational and flights are made up of several types and numbers of aircraft a listed on cards. Luftwaffe missions are also card driven. Combat takes place between these flights and involves the use of radar, bombing runs, fuel management and repairing facilities and aircraft.  The game is played as four stand alone scenarios, the first being the battle for the Channel, which where I am.

Overall I am enjoying the game which can be played solo, but would be much better with a live opponent.

This is what it looks like at the initial set up phase: 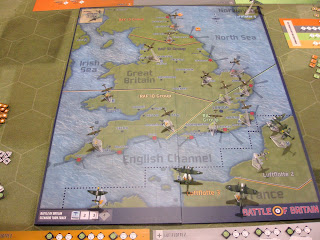