I very much enjoyed my last ACW game using my Spencer Smith figures and have always fancied having a go at some Gettysburg actions.  I decided to try out one of the Battlecry scenarios, albeit one of the unofficial games. This time I used my old Airfix armies.

I picked a scenario that covers the first few hours of the Battle of Gettysburg when the Confederates from the leading brigades of Heth's Division run into the hasty defence set up by Buford's cavalry.  Here is an overview of the battlefield, the Confederates are at the top working their way across Willoughby Run, with Buford's cavalry brigades sitting on McPherson's Ridge, supported by a battery of guns.  Federal reinforcements can be seen moving down from Seminary Ridge at the bottom: 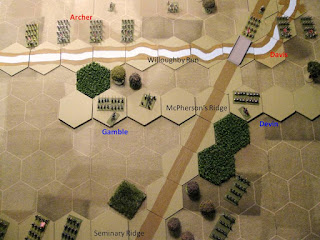 Initially the two Federal cavalry brigades of Gamble and Devin will have to hold the line until infantry support arrives. The Confederate attack begins with Davis's Brigade crossing the stream towards Devin, although one regiment is quickly sent packing by carbine fire near the bridge: 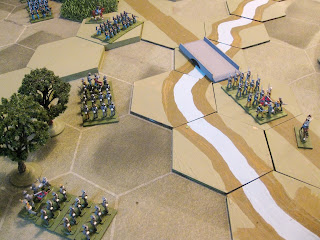 Despite causing some casualties Davis is unable to push Devin off the ridge and all the time the reinforcing Federal infantry is closing in: 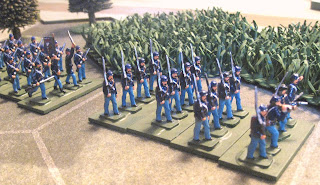 Heth changes tack and orders Archer to send his troops into the Federal left flank, and three regiments wade Willoughby Run and advance up the slope: 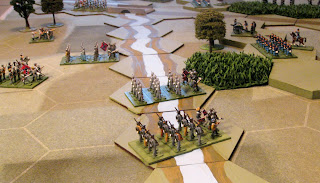 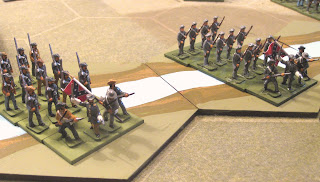 The rebels have a little more success on this flank as they have some cover from the Federal guns.  After a bitter firefight they force Gamble's men off the ridge and it becomes a race to see who can gain the ridge crest first: 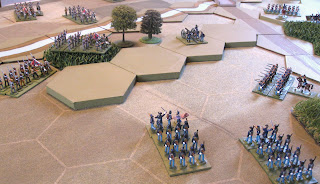 The Confederates manage to capture this end of the ridge, but the federal artillery, despite heavy casualties, and Gamble's cavalry, who have now rallied, continue to pour fire into the grey ranks. The battle on the ridge ebbs and flows for a while, but eventually the Confederates consolidate their position. 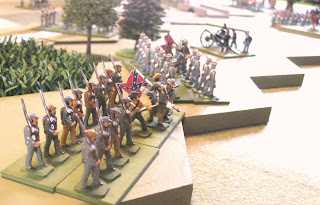 On the opposite flank Davis launches a second attack against Devin and once again is pushed back by cavalry carbine fire: 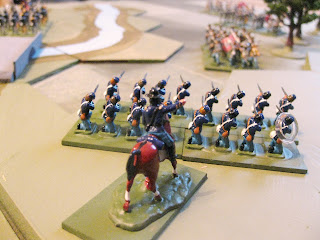 At this point the first Federal reinforcements arrive and this end of the ridge is held: 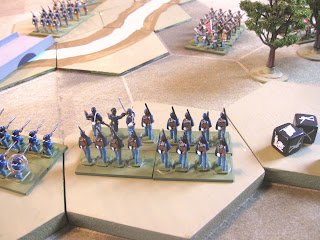 Back over on the Federal left reinforcements are also arriving: 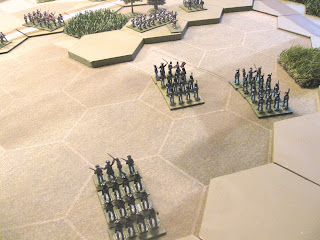 Also, the stubborn Federal artillery fights on at close quarters, but is eventually overun: 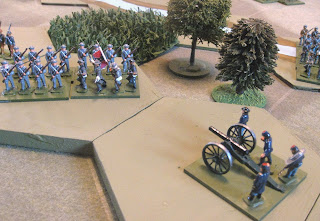 Gamble's Brigade, now rallied advances once more and engaes the Confederates on the ridge, unfortunately they are destroyed. Gamble is hit and falls from his horse. 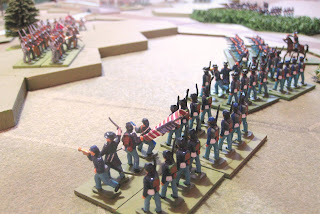 Attention now shifts back to the Federal right, with Confederate regiments sweeping around the flank: 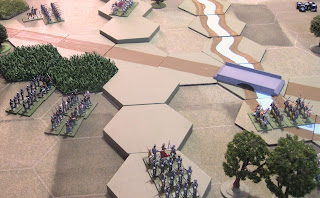 The last of Buford's cavalry are swept aside and Devin falls with them. The Confederates now control the entire length of McPherson's Ridge, earning vital victory points, which when added to the two lost Federal generals was enough to give the Confederacy victory - the final tally 5 -2.

This game worked well.  I played it with full Battlecry rules.  despite some rotten cards for the Confederates they managed to win the day.