I have always been interested in the Naval Battle of Narvik in April 1940, so I thought this might be a good scenario for a small naval wargame.  Now, the real battle was quite complex and there were actually two separate actions.  My battle is based upon the first action, which sees a British destroyer flotilla in Ofotfjord heading back towards Narvik harbour to finish off the German shipping that had been damaged during the British raid. My re-enactment ends here because there is no way I could replicate the confusion, the weather and misinformation of the day.  I have also ignored the presence of German U boats in the Fjord.

Other factors of note are that the British believed there were just a few German destroyers in the Narvik area; in fact there were ten that had been delivering troops for the German invasion. Two were sunk during the first action (Wilhelm Heidkamp and Anton Schmidt)  Of the ten German ships, three were out of acton from the earlier raid (Hans Ludemann, Hermann Kunne and Diether von Roeder). It is also worth noting that German command had been disrupted as the German Commander Bonte died when Wilhelm Heidkamp was sunk). During the second action, when the German destroyers did show up they were initially mistaken for cruisers.

My battle begins with the British Destroyer Flotilla heading back towards Narvik harbour, commanded by Captain Warburton-Lee aboard HMS Hardy, with Havock, Hunter, Hotspur and Hostile in line astern: 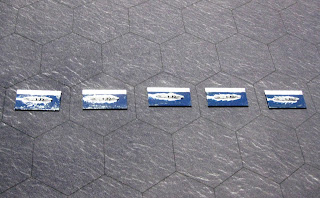 The British intent is to close in to range of the harbour and finish off the three crippled German destroyers: 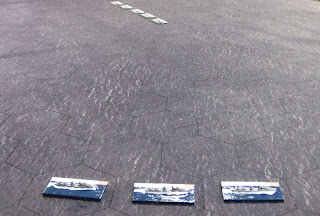 However, as they approach Narvik, Hardy spots three more German ships coming from the northeast and, mis-identifying them as at least one cruiser, the situation changes: The new arrivals are in fact all destroyers, Wolfgang Zenker, Erich Koellner and Erich Giese. The British Flotilla, believing it is now out gunned, turns away to the west: 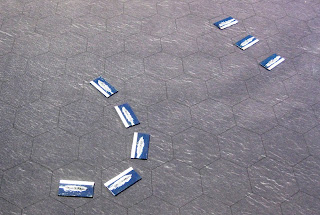 The three German ships open fire. Hardy is badly damaged and both Havock and Hunter suffer reduced speed due to engine and boiler damage.

The British ships now turn to engage, Hotspur and Hostile having to take evasive action to avoid the slowing ships ahead: 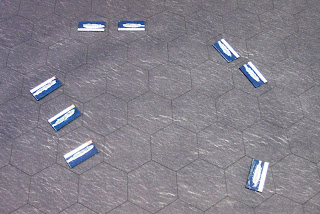 The British now completely out gun the three German ships, which are battered to destruction, however, in the fight Havock and Hotspur are out of action and on fire: 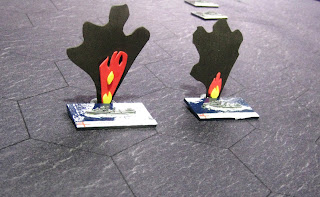 Thinking the road clear to escape the Fjord the damaged Hardy heads west, while Hotspur and Hostile try to catch up having been finishing off the German destroyers. To the British surprise, two more German ships appear out of the gloom and again these are mistaken for cruisers. It is in fact destroyers Georg Thiele and Bernd von Arnim, moving quickly to engage the lone, damaged Hardy: 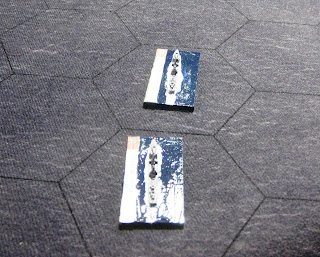 Hardy is easy prey and quickly succumbs to the combined fire of the two German ships: 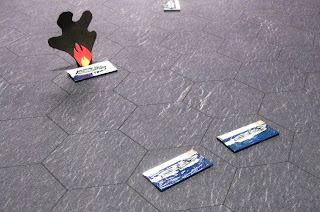 Shortly after, Hotspur and Hostile are in range and attack the German destroyers, causing major damage to both ships by disabling their engines.  However, Bernd von Arnim has lucky hits and the Hostile explodes: 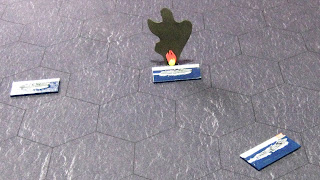 In the exchange of fire though, both German ships are crippled and George Thiele sinks. Hotspur manages to slip behind Bernd von Arnim and pounds her with a broadside putting her out of action.

Hostspur breaks out of the Fjord at the end of a very expensive day for the British: 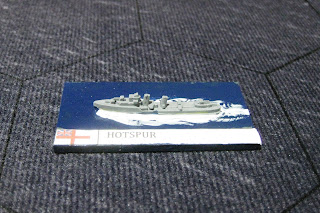 In the real battle Hardy and Hunter are lost and Hotspur is critically damaged, but is escorted out of the Fjord by Havock and Hostile.  Captain Warburton-Lee is killed on the Bridge of Hardy and awarded a posthumous VC. The Germans did not lose any destroyers in the second battle, but were forced to break off due to damage and lack of fuel.  They were later largely destroyed during the second battle.of Narvik.

As a wargame, I used Bob Cordrey's 'Gridded Naval Wargames' rules.  These provided a very fast and simple game.  Because the destroyers are only valued at 4 SP they quickly succumb to enemy fire, especially as a six counts as two SP hits.  If I play this again, I will adjust the combat and defence powers somewhat.  That said, it was a fun game that lasted less than an hour.