Phil came to stay for a long weekend, which gave us the chance to play a couple of wargames.  His choice was WW2 and we kicked off with our version of the Battle for Maltot; when 129 Brigade attacked the village in July 1944. 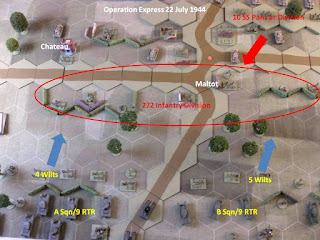 Maltot had been in the centre of fighting for Hill 112 and by the time of Operation Express it was a complete ruin.  The village was occupied by elements of 272 German Infantry Division, as well as a strong point at the Chateau on the German right flank. Once the fighting began, the Germans moved units from 10th SS Panzer Division off hill 112 as reinforcements,  This included part of 102 Heavy Panzer Regiment, equipped with Tiger 1 tanks.

129 Brigade advanced with two Battalions up; 4 Wilts on the left, 5 Wilts on the right, supported by Churchill tanks from 9 RTR. The 4th Somerset Light Infantry were in reserve.

The battle kicked off with a British artillery bombardment on the forward German positions in the hedgerows: 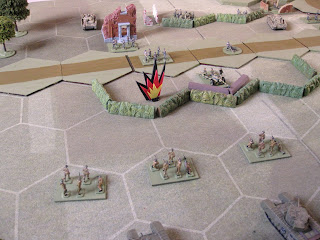 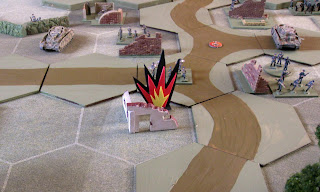 4 Wilts crossed the start line and made good progress, with A Sqn 9 RTR in close support: 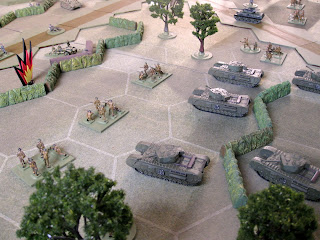 Meanwhile on the British right, 5 Wilts began to move forwards, again with artillery and mortar fire in support: 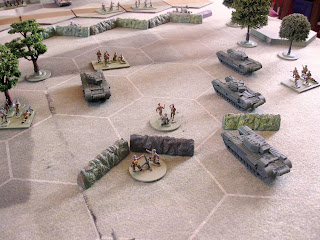 5 Wilts were not so fortunate as a German 75mm anti-tank gun halted B Sqn's advance, with the Churchills pulling back and the infantry came under machine gun fire. One of 5 Wilt's companies became isolated.... 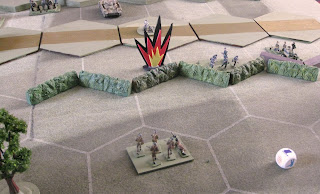 Bravely battles forwards through the hedges, only to run slap bang into the newly arrived SS infantry, to be destroyed: 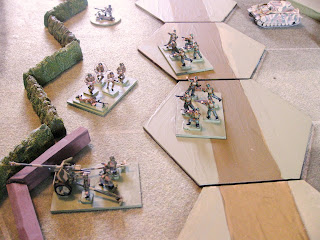 The SS advance continued and pushed 5 Wilts back: 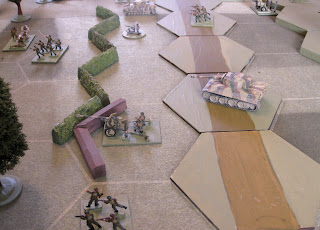 A tiger tank rumbles into Maltot: 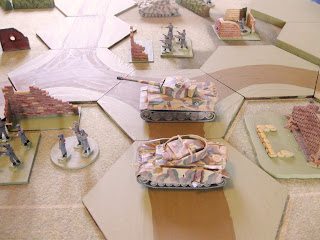 On the opposite flank things are going better for 4 Wilts, who have been joined by two M10 tank destroyers. A German Pz IV is dispatched: 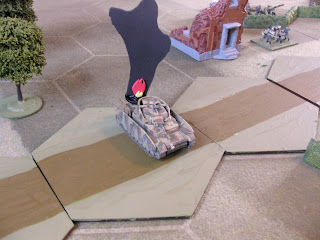 And the Churchills crunch through the hedges, which have been vacated by the Germans: 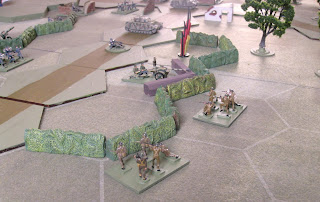 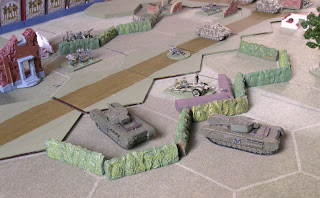 The M10s take out another Panzer IV : 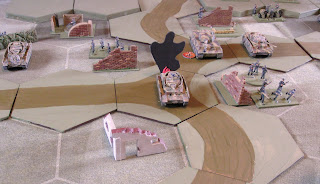 And a third falls victim to the Churchills; however, the M10s are driven off by a Tiger, as British infantry work their way into the ruins: 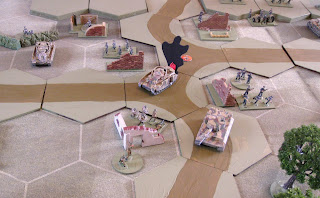 In the Centre a brisk action takes place between British infantry and the Germans in buildings and tanks; a tiger succumbs to a barrage of PIATs and grenades: 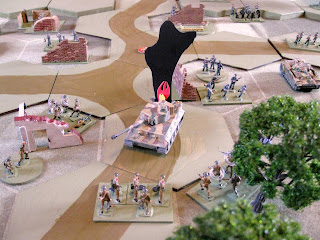 The British push on into Maltot, suffering heavy casualties, they overcome the German defenders: 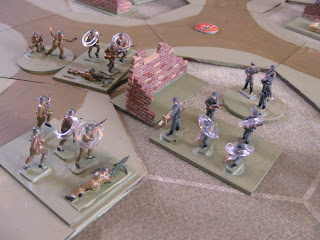 At this point, the Germans reached their exhaustion point and began to withdraw.  It is a British win at 10 - 6 points.

We used Memoir '44 rules, modified with some in house amendments.  We felt that the battle ended a little prematurely, although the Germans had lost around 50% of their tanks and most of 272 Division troops. Both 4 and 5 Wilts had lost significant casualties, but 9 RTR came of fairly unscathed.