In a batch of figures, purchased as part of the Eric Knowles collection, I was intrigued by some rather odd looking figures. They are typical SYW figures, but their Russian grenadier helmets are adorned with massive plumes made from ostrich feathers. I just had to paint them.

After a bit of research I was able to work out the uniform colours and importantly what the plumes might look like. It seems officers wore white, rank and file a dark red and NCOs and musicians a combination of red and white.

The figures are by Minifigs and they join my slowly expanding SYW forces: 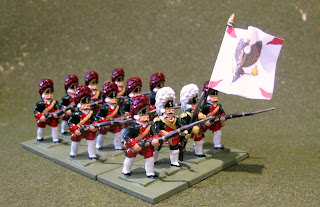 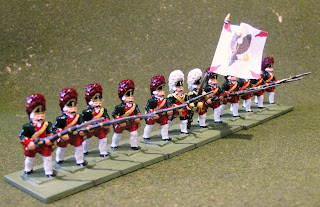 I have enough SYW figures to keep me going for many months, if not years. I have decided to paint a brigade size element for each major nationality, plus some of the minor states. This will quickly give me enough troops to try out some table top action.