This battle was fought several days ago, with Phil playing the British airborne and I the Germans. The battle was taken from the Memoir '44 starter scenario, that I am sure many have played themselves.  We played it straight 'out of the box' with none of our in house rules changes: 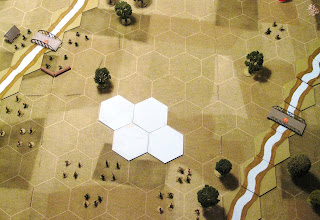 Unfortunately for the British the card gods were very unkind limiting movement largely to the right flank. Instead of a quick rush to secure the Caen Canal Bridge, the airborne troops concentrated on the Ranville bridge, over the Orne river on the right flank.  Even this attempt ran into difficulty as the Germans lodged themselves in the woods and on the bridge itself: 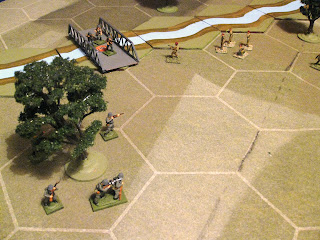 More airborne troops were sent in to this battle, which raged for most of the game. Meanwhile German reserves built up in the area of the canal bridge: 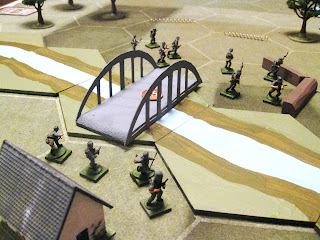 Eventually, through sheer weight of numbers the Ranville bridge was captured: 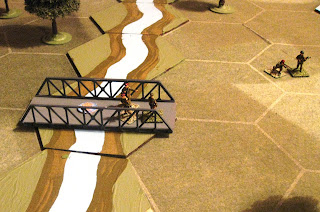 But, the assault on the canal bridge never really got underway properly: 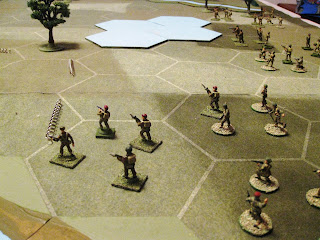 Attacks in penny packets by the British were beaten off, causing ever mounting casualties for the British: 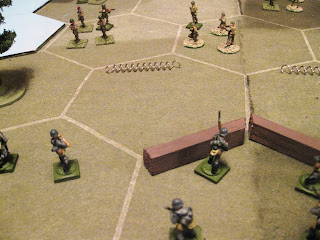 Held up by wire, with the alert Germans in strong defensive positions, all attacks failed. The outcome was a German win with a score of 4 -2.

The bridge was not held and the British airborne were not relieved! The figures used were a mix of old Hinchliffe 20mm, assorted plastics and some MLR metal figures. A frustrating day for the the British resulting from a very poor hand of cards.