Over the last week I finished off a number of projects relating to my colonial collection. First we have some Gurkhas and I have doubled the size of the unit, which was originally only eight figures in number. The figures are by Eureka and are nicely detailed.  In the longer term these figures will be off to Palestine to fight off the Turks: 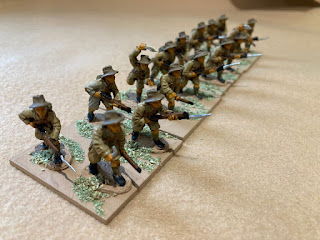 The next batch of figures have been sitting on the lead mountain for a few years.  They are Boer infantry that came with a load of Barry Minot British colonials.  The castings are in fact by Stadden; I believe they are now sold by Tradition. They are nice delicate castings but are quite small when compared to my other figures: 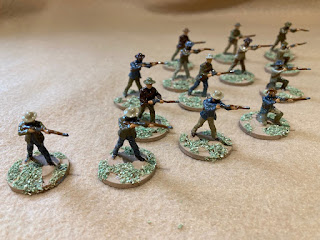 My final project is the raising of a Brigade of British infantry to head off and deal with my Minifigs Pathans.  These figures have been collected in dribs and drabs over the years and I was a little shocked when I dug them out as I didn't realise that I had so many.  There is a further battalion on the painting table, plus two units of dismounted Mounted Infantry to add to these.

Here we have two infantry battalions, an artillery battery, a machine gun section and command.  All of the figures are by Minifigs: 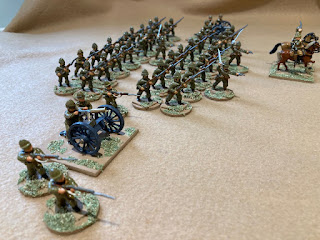