My Warlord Epic Waterloo 15mm French army is nearing completion.  While I was waiting for the bulk of the figures to come back from the painter I purchased an Imperial Guard set and began painting them.  They are lovely figures but are a real test for my eyes.  The figures appear to be 13.5mm, rather than 15mm  and consist of ranks of 10 figures, with 80 figures making a battalion.

Here are two battalions of Imperial Guard Grenadiers.  Fortunately they are in campaign dress which simplifies the painting, although you could really go to town on the detail with the right brush and decent eyesight! 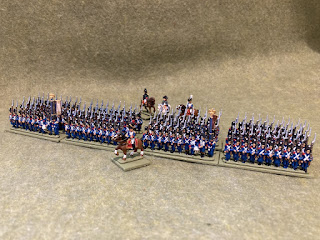 The officer figures are also from the Epic range, but Napoleon is a 15mm Minifigs casting.  I bought him before Warlord brought out their senior commander sets.

I am now in the process of organising and basing the rest of the French.  Pictures to follow shortly.